Women can let their rage scorch them slowly from the inside out — or they can channel it and express it in powerful and beautiful new ways, says writer and activist Soraya Chemaly.

On September 15, 1963, a Sunday morning, members of the Ku Klux Klan bombed the predominantly African American Sixteenth Street Baptist Church in Birmingham, Alabama, killing four girls. Singer Nina Simone was overcome with shock and rage. “I had it in mind to go out and kill someone,” she explained when describing how she came to write “Mississippi Goddamn,” one of the most moving and powerful protest songs of the 20th century. Her husband turned to her and said, “You can’t kill anyone. You are a musician. Do what you do.”

There is creativity in anger, and much anger in creativity. Women are constantly manifesting rage in visionary and productive ways. What you do will differ from what someone else chooses to do. There is no one right way. For me, writing has been a mechanism for converting powerful negative feelings into immensely satisfying and productive work. Writing led me to action, clarity and a community that was thinking and feeling as I did. In writing, the anger I felt might overcome me became a vehicle — not a destination. The clinical term for this is sublimation, defined as a mature defense mechanism that, unconsciously, transforms socially unacceptable feelings and behaviors into socially acceptable ones. Some people might call this anger management, but it is really transformation.

While sublimation is an unconscious process, anger can also be explicitly woven into everyday life in productive ways. This shouldn’t be confused with efforts to “get your rage out” in destructive acts. For example, “anger rooms” have opened up around the country as businesses. People throw vases, destroy TVs and wreak physical havoc on a useless space. While maybe fun and even humorous, and the 20 minutes of relief it provides might feel good, in reality this kind of destruction rarely does anything to alter feelings of anger or to change the conditions that generate anger.

“By writing,” said Gloria Anzaldúa, “I put order in the world, give it a handle so I can grasp it. I write because life does not appease my appetites and anger.”

The key, really, is in doing what you do best and, often, in a way that creates information that can be used by others. Self-described “Chicana dyke-feminist, tejana patlache poet, writer, and cultural theorist” Gloria Anzaldúa used her anger to stunning effect in her work. “By writing,” she explained, “I put order in the world, give it a handle so I can grasp it. I write because life does not appease my appetites and anger.”

Dartmouth College women’s studies professor Jacqueline Wernimont maintains what she calls an “angry” bibliography. In response to constant examples of the erasure of diverse voices in academia, she updates her list with information about work produced by a much broader range of scholars. “If we can’t see the ethical stakes and power relations in digital archives,” she explains, “we are going to do violence. Do better.” Sports journalists Shireen Ahmed and Jessica Luther, along with several others, started a podcast called “Burn It All Down” to create sports media that runs counter to the problematic mainstream neglect of women’s voices in sports.

When I spoke to musician Janelle Monáe about the role of anger in her work, she described a clear sense of its place, role and cultural legacy. “I have a difficult time immediately articulating ‘I am angry,’” she said. “As an artist, while performing, I don’t overthink my emotions, I just ‘do’ them.” She is aware, however, of why those emotions powerfully matter. “We are making this music as our weapon. We can get people involved. We wanted to remember these people [victims of police violence] and remember what happened. The next generation can remember that this happened. We chose to use music as a way to combat this injustice. We wanted to use our voices to deal with our anger.” In 2016, Monáe launched the grassroots organization Fem the Future to advocate for women’s parity in the entertainment industry.

Contrary to the idea that anger clouds thinking, properly understood it is an astoundingly clarifying emotion.

Anger and its power are persistent themes in the lives of people who make social justice a priority in their lives, or for whom social injustice is a daily reality. During the civil rights movement, Dolores Huerta and Cesar Chavez cofounded what is now the United Farm Workers union. “You grow up with all of this racial injustice, and it just makes you really angry,” said Huerta, a lifelong activist who is now 88, in Dolores, a 2017 film about her life. But wild destruction and rage, she added, “will get you nowhere.”

Understanding the social and political issues that affect your life is a critical part of thinking about your anger. Plan how to best use the anger you feel. Focus, think and analyze. Strategizing allows you to decide when it makes sense to speak or act (or not), how to anticipate situations that cause stress, and think clearly — not in the heat of the moment — about how you want to solve or give voice to problems. The more you know, the better equipped you are. And the better equipped you are, the more efficacy and uptake your anger will have. Contrary to the idea that anger clouds thinking, properly understood it is an astoundingly clarifying emotion.

Excerpted with permission from the new book Rage Becomes Her: The Power of Women’s Anger by Soraya Chemaly, published by Atria Books, an imprint of Simon & Schuster, Inc. Copyright © 2018 by Soraya Chemaly.

Soraya Chemaly is an award-winning writer and activist whose work focuses on the role of gender in culture, politics, religion, and media. She is the Director of the Women’s Media Center Speech Project and an advocate for women’s freedom of expression and expanded civic and political engagement. 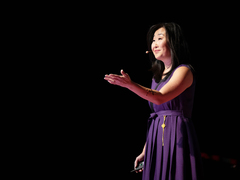 My story of love and loss as a transracial adoptee