Architecture expos are often futurist fantasias of design — but this year’s Venice Biennale explores how humanity’s first art can house (and treat) us all better.

So-called “starchitecture,” flashy buildings designed by high-profile architects, has been the face of the industry for decades now. But at this year’s Venice Biennale of Architecture — an expo that usually celebrates the very best architecture participating countries have to offer — some more interesting ideas emerged. This Biennale is more about building a better world than a better building, with participants (who include not just countries but universities, NGOs and private firms) addressing issues such as poverty, disease, segregation, access to sanitation and pollution. Take a look.

On May 15, 2014, 17-year-old Nadeem Nawara was shot dead in the Palestinian village of Beitunia. Researchers at London-based Forensic Architecture performed complex audio and video analyses to help determine which of two soldiers was responsible. Among its techniques: using geographic data, surveys, and photographs to produce a three-dimensional model of the relevant section of Beitunia. Using the model, principal investigator Eyal Weizman reports, “we drew the line of sights for both soldiers, and found that only one had a clear view to the position of Nawara when he was shot.”

Use drones to deliver necessities to remote villages

Miracles can come by air. Jonathan Ledgard, a former journalist, envisions drones bringing necessities, including medicine and tools, to the vast number of African villages that don’t have reliable road access (the same way towns that never had wired phones now have cell service). His organization, the Red Line cargo drone network, has organized a demonstration project (call it a pilotless pilot program) in Rwanda. Norman Foster, through his foundation, has designed the project’s droneports, arched buildings where the craft will land, and where their cargo can be unloaded and stored safely. As Foster said, “Drones could go from killing machines to living machines.” Photo courtesy of Nigel Young and the Norman Foster Foundation.

Caracas architect Alejandro Haiek has helped build a number of recreational and arts facilities in Venezuela. He writes: “When we began occupying the abandoned parking lot in Caracas that would become Tiuna El Fuerte Cultural Park, residents knew they wanted a cultural center, but didn’t know what it should look like. Instead of proposing a design, we invited local performers — dancers, skaters, musicians — to start using the space as it was. This led to the creation of instant infrastructures that evolved in real-time.” The building Haiek designed made those temporary infrastructures permanent. That approach, he says, “guaranteed the continued use of the center by the community.” Photo by Francesco Galli.

Use abandoned buildings as sources of new materials

At the U.S. pavilion, 12 architecture firms presented ideas for sections of Detroit in need of reinvention. One of those firms, T+E+A+M, reimagined the city’s vast, abandoned Packard Plant as a rich stockpile of resources. “Broken bricks, concrete chunks, fragments of glass and other materials are collected, sorted and granulated. Off-site waste materials from consumer, industrial and agricultural streams are also processed and mixed with those materials,” write the architects, explaining how they create a kind of aggregate that can be formed into building blocks. “Detroit doesn’t have a materials problem; its materials have an image problem.”

Let people tell their own story

Manuel Herz, a Basel-based architect who maintains a private practice while also doing human rights work, has devoted a decade of his life to telling the story of the Sahrawi people, who were forced to flee their homes in Morocco in 1975 and now live in camps in Algeria. Yes, he brought in a western photographer, Iwan Baan, to photograph the camps. But he also had 30 Sahrawi women weave rugs depicting the camps, sometimes as architectural renderings and other times as maps. Seeing the settlements depicted in such a labor-intensive and personal way makes the Sahrawi plight palpable. Here, the medium truly is the message. Photo by Iwan Baan.

Listen to the people who build your buildings

For society to be more fair, the workers who erect condos and office buildings have to come out of the shadows. In Poland’s pavilion, videos of construction workers, complete with heart-rending narrations, began that process. One ditchdigger recalls hearing a passing mother tell her toddler son, “Do well in school or you’ll end up like him.” The argument: In a world of fair trade coffee, why not fair trade housing — where developers promise to pay workers a living wage and take their safety seriously? Says curator Dominika Janicka, “By presenting the stories of persons directly involved in the building process, we ask whether ‘fair trade’ is achievable in the field and, if so, what would it be?” Photo by Andrea Avezzù.

Use bees to help determine the biological makeup of a city

Kevin Slavin (TED Talk: How algorithms shape our world), together with his Playful Systems group at the MIT Media Lab, and various collaborators including the Mori Building Company, have taken on a not-so-playful task: producing a microbiological map of Venice. Their fieldwork is performed by honeybees, who live in the Palazzo Mora, in a hive modified to capture “bee debris.” The bees fly around the island city, and while gathering pollen also collect microbes, which they drop into the trash heap at the bottom of the hive. The microbes are sent to labs for metagenomic sequencing. One goal is to learn about differences in microbial communities in different cities, and how this might affect ways of protecting and improving human health. But more broadly, Slavin writes, “my collaborators and I are interested in building a cultural imagination for the vast and invisible world that surrounds us.” Photo courtesy of Kevin Slavin.

If you’re going to welcome immigrants, design cities to accommodate them

The German pavilion was physically altered to invite people in; doors were turned into large portals that can’t be locked. The message of the pavilion, curated by a team from the Deutsches Architekturmuseum, is that a country receiving immigrants (Germany took in about 1 million in 2015) should build or retrofit “arrival cities,” municipalities designed around newcomers’ needs. Arrival cities should provide cheap rents, access to ethnic networks that facilitate adjustment and easy transportation to jobs. Many of the ideas were derived from the 2010 book Arrival City: How the Largest Migration in History Is Reshaping Our World, by Canadian journalist Doug Saunders, who wrote, “Successful arrival cities create prosperous middle classes; failed arrival cities create poverty and social problems.” Photo by Felix Torkar.

Don’t just redesign houses — redesign ways of paying for them

Alejandro Aravena (TED Talk: My architectural process? Bring the community into the process), the director of this year’s Biennale and the winner of the 2016 Pritzker prize, has pioneered the idea of “incremental housing” — residential units that are half-finished by contractors, making them affordable, then completed by homeowners when they have the time and money. The UK pavilion, dubbed Home Economics, provided a variant on Aravena’s concept. One part of the pavilion, curated by British-Venezuelan designer Julia King, proposes building houses without non-essential finishes or features, allowing banks to provide mortgages that working class people can afford. Homeowners would then provide the non-essentials over time.

Life Object, the Israeli pavilion, was packed with ideas for ways architecture can borrow from biology. One project investigates ways of heating, cooling and ventilating buildings based on the “natural air conditioning system” of the mammalian nose. Another manipulates bacteria to “light up” in the presence of pollutants, acting as microscopic sentinels. One group investigated whether bryozoa — colonial aquatic invertebrates — could be used to create building skeletons the way they create their own skeletons. Another looked at males of the sapphirinid copepods, small marine crustaceans that have the ability to change color in response to light conditions, suggesting possible use in paints and building materials. Photo by Francesco Galli.

Fred Bernstein studied architecture at Princeton University and law at New York University, and frequently writes about both subjects. 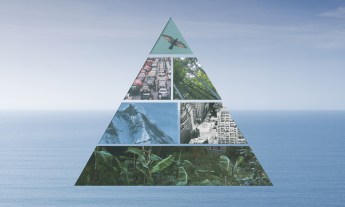