The shortest paths to happiness. Literally

Figuring out how to walk quickly from A to B is easy. Just plug two addresses into your favorite map app, and off you go. But sometimes getting to a place as quickly as possible isn’t the priority. At least, so thought Barcelona-based Yahoo! Labs researcher Daniele Quercia (TED Talk: Happy maps). Along with two colleagues, Rossano Schifanella and Luca Maria Aiello, he decided to try and code a mapping algorithm that could recommend a “happy” route.

What? How? By using metadata from social media photos and by getting thousands of volunteers to vote on images of a city’s streets, the team built a model that can suggest beautiful, quiet and happy routes. So far, they’ve applied the happy model to high-trafficked areas of Berlin, Boston, London and Torino. Take a look: 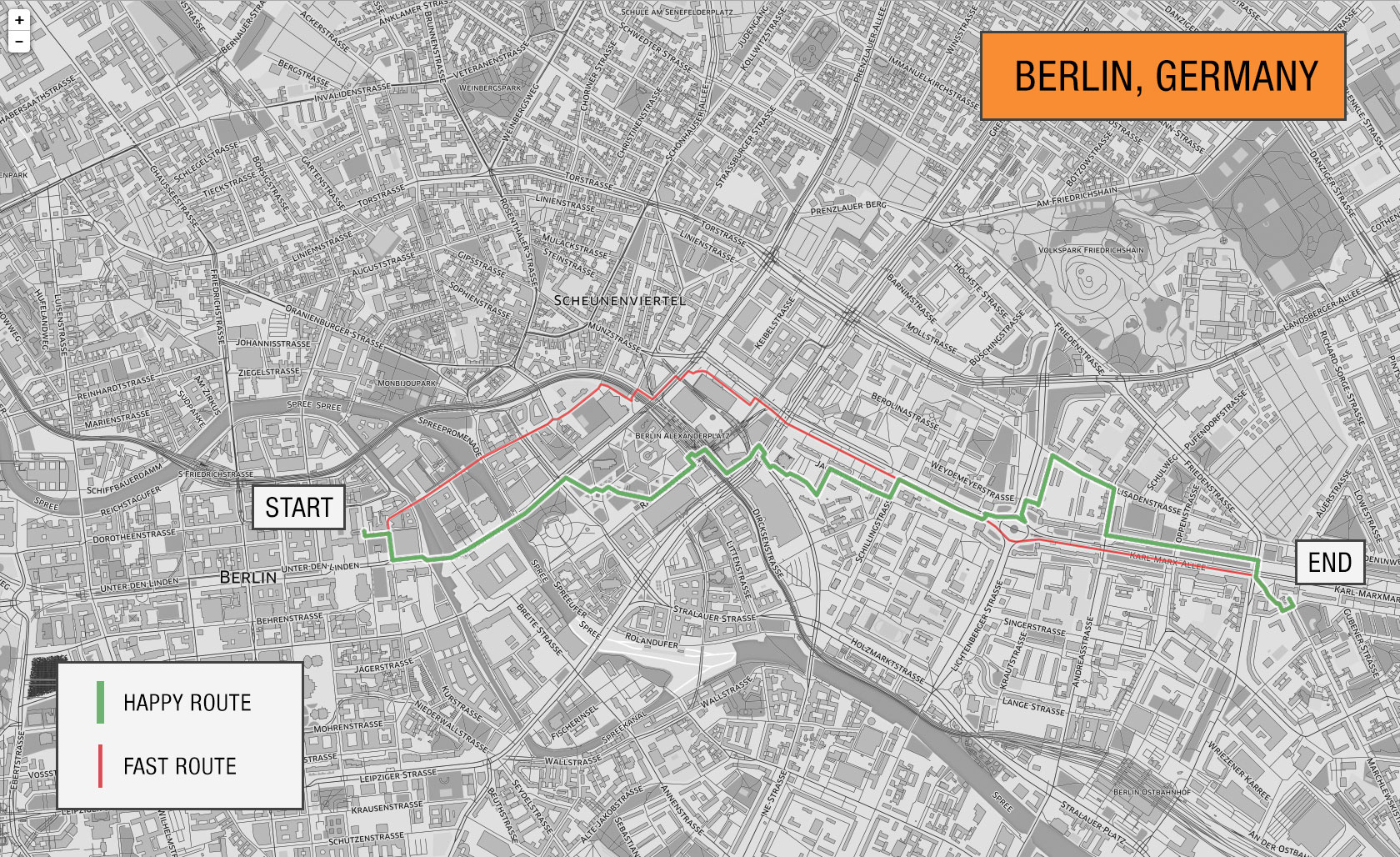 Fast route: 4 kilometers (47 minutes)
Happy route: 4.5 kilometers (55 minutes)
Why this’ll make you happy: The happy path takes you from the city’s Humboldt University, where you can browse in one of the country’s largest college libraries. The short route plows along the traffic-filled Karl-Liebknecht-Strasse and Karl-Marx-Allee, while the happy route takes you through a beautiful tree-lined plaza by St. Mary’s, one of the oldest churches in Berlin, and through Alexanderplatz, Berlin’s iconic commercial city center. You’ll end up at the community center and arts space called Alte Feuerwache (the Old Firehouse). 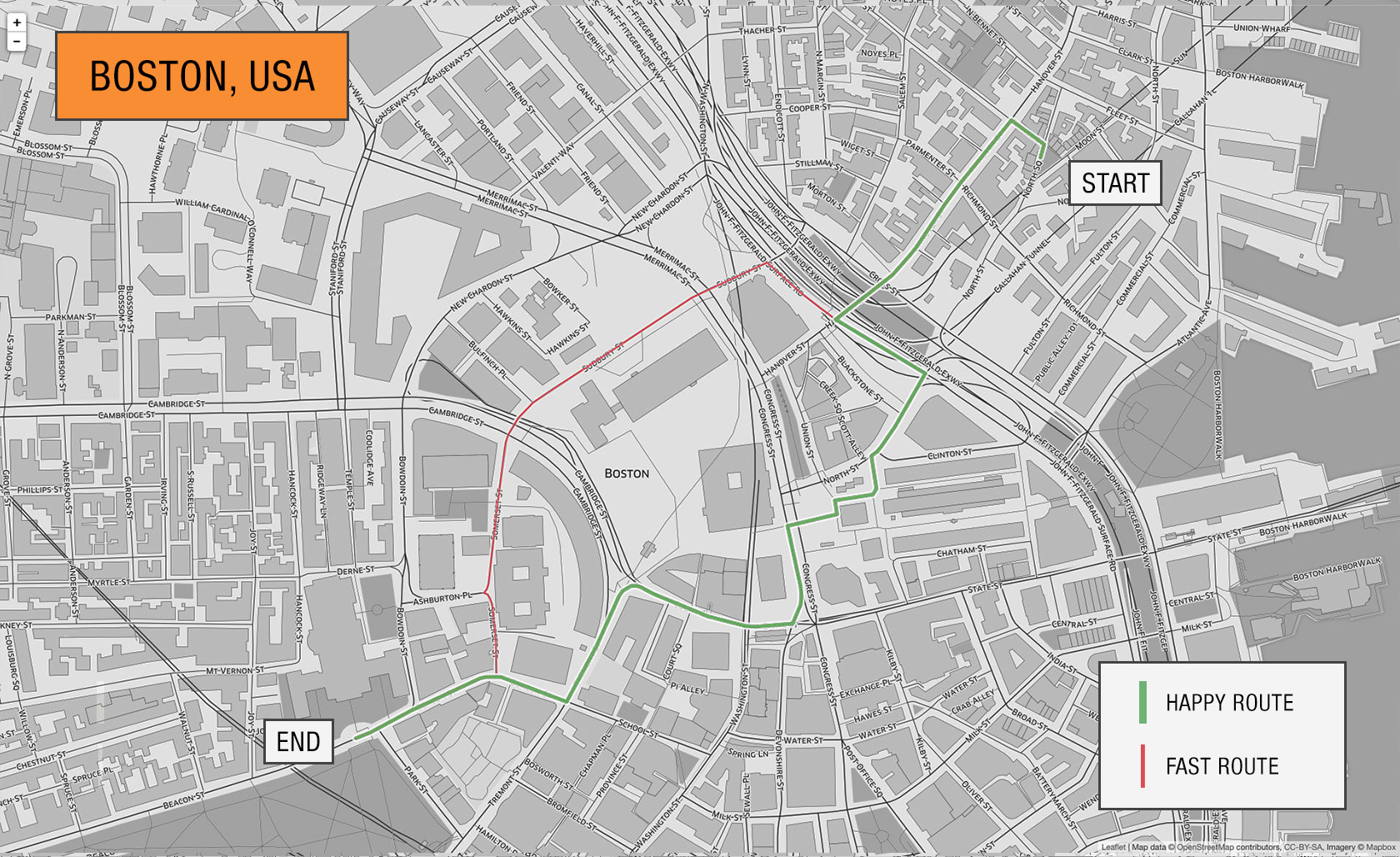 Fast route: 1.5 kilometers (17 minutes)
Happy route: 1.5 kilometers (19 minutes)
Why this’ll make you happy: As you walk from the historic home of colonial American patriot Paul Revere to the gold-domed state capital, skip the shortest route, which goes along car-lined Sudbury and Somerset Streets, and instead take a walk past two city landmarks. Faneuil Hall has been a meeting place and marketplace since 1742 — check out the grasshopper weathervane that still sits on top of the building. This route, just two minutes longer, also takes you past the Old State House and the square where a confrontation between British soldiers and an angry mob turned deadly … and sparked a revolution. 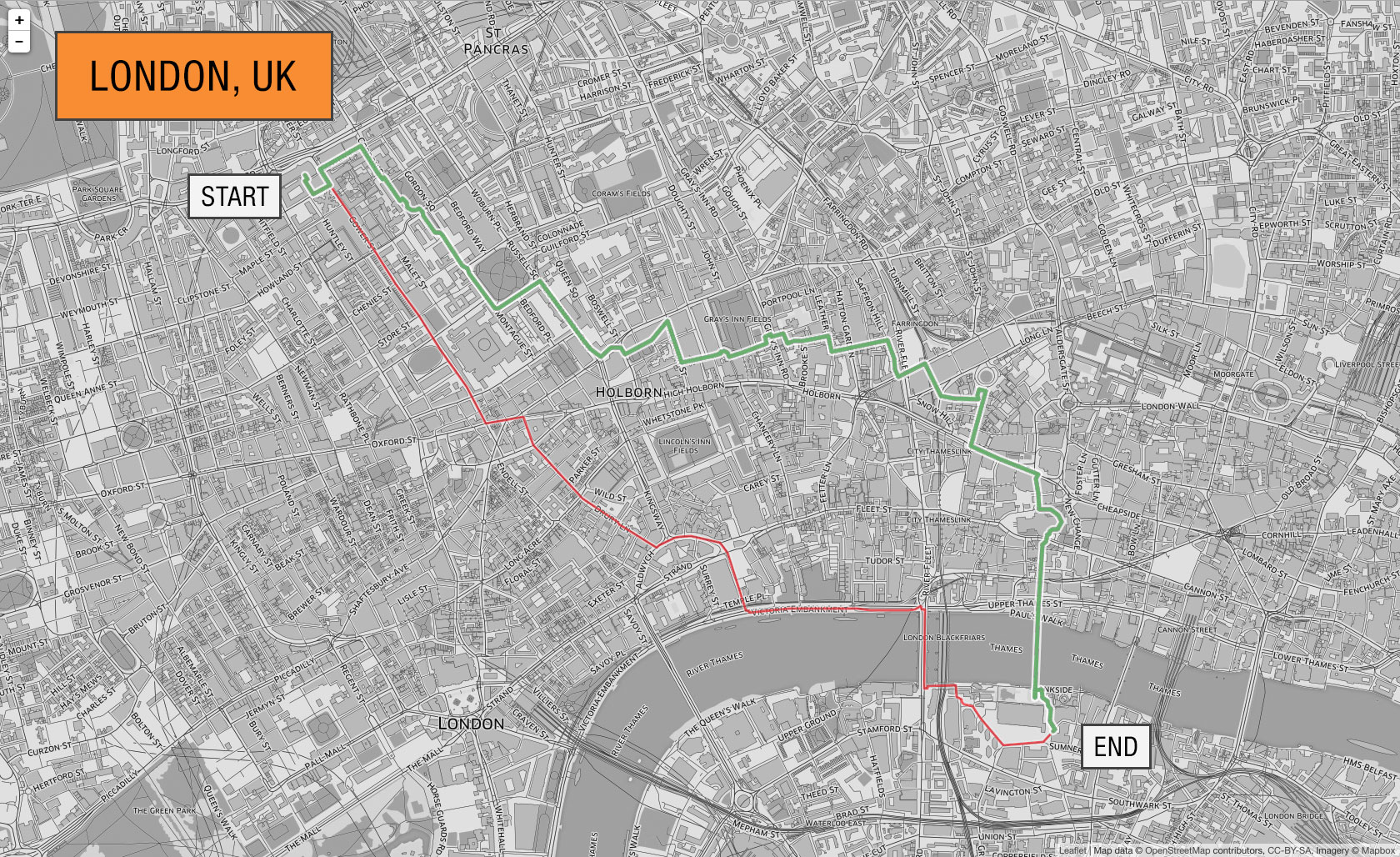 Fast route: 4.0 kilometers (46 minutes)
Happy route: 4.5 kilometers (53 minutes)
Why this’ll make you happy: The shortest path from the Euston Square Underground station to the Tate Modern gallery starts by taking you along busy Gower Street. But add six minutes to your route, and you can wend your way to the modern art on a quieter path: Saunter along the parallel, less busy Gordon Street and walk past Gordon and Russell Squares. Instead of taking the Strand, full of people and cars, walk along historic and beautiful Fleet Street, the storied former home of London’s newspaper industry. 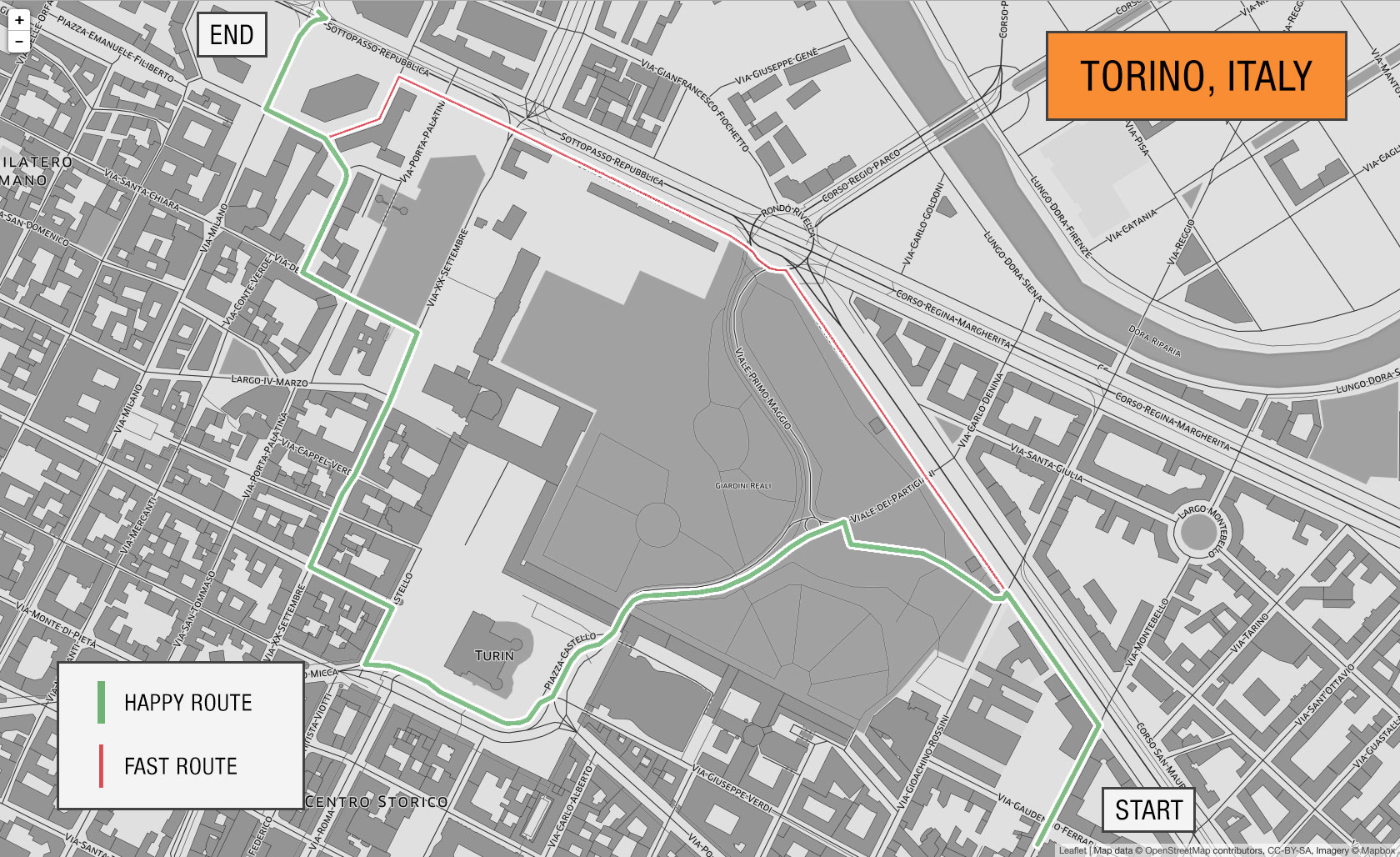 Fast route: 1.5 kilometers (18 minutes)
Happy route: 2.0 kilometers (25 minutes)
Why this’ll make you happy: The Mole Antonelliana in Torino, or Turin, is a 19th-century tower with a museum of cinema inside. Spend a couple hours looking at old Italian movie posters, then walk over to the Piazza della Repubblica, also called Porta Palazzo, to check out what’s possibly the largest street market in Europe. The shortest path takes Corso San Maurizio and Corso Regina Margherita, two of the most trafficked roads in the city. By contrast, the happy path takes seven extra minutes and passes through Giardini Reali, the gardens behind the Royal Palace, and around Piazza Castello, the historic main square, where you can spend some time in the 13th-century Madama Palace before completing your route through the small stone streets of the Roman quarter. 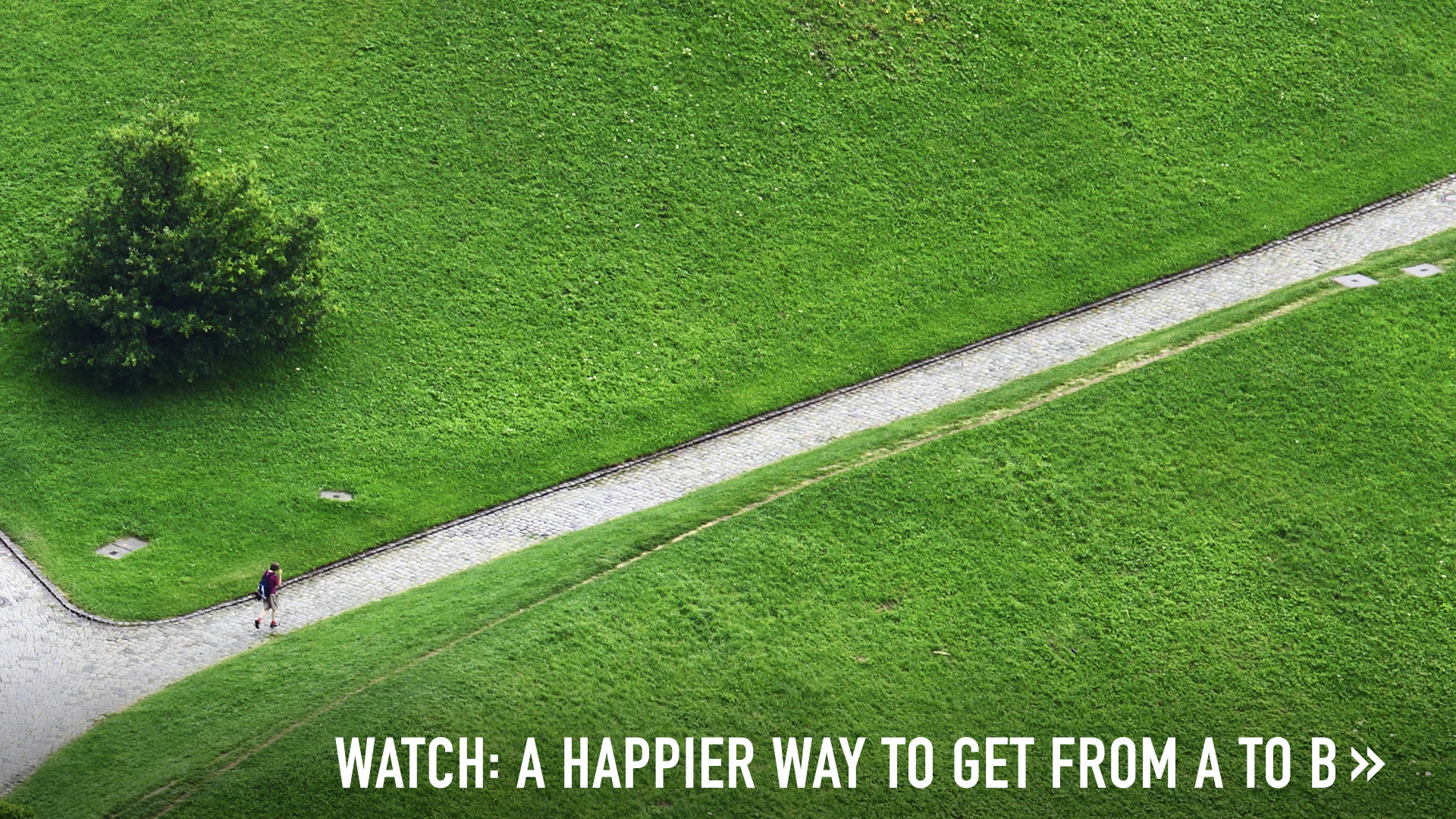 Thu-Huong Ha writes and edits for TED. She likes to eat and learn, at times in tandem.