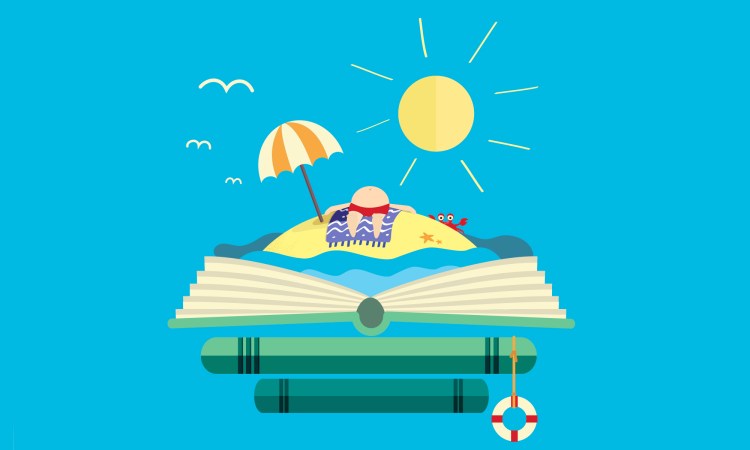 Time is precious, we know. Here, compiled from past reading lists, are suggestions for two dozen short but mighty books to pick up.

The Summer Book by Tove Jansson
The quintessential celebration of summer in Scandinavia — 22 vignettes of a girl and a grandmother on an island. Jansson is best known as the creator of Moomin, and this book is my quiet, curious and simple favorite.
— Linda Liukas (TED Talk: A delightful way to teach kids about computers)

The Vegetarian by Han Kan
This is the first full-length novel by South Korean literary star Kang to be made available in English. It tells the story of a woman who suddenly stops eating meat, a shock decision that fractures her family relationships, allowing glimpses of the traumas, assumptions and impossible dreams that lie beneath. The writing is stunning: poetic, alluring, troubling and strange. And the drama keeps you turning the pages to the end. Fabulous.
— Ann Morgan (TED Talk: My year reading a book from every country in the world)

Late Fame by Arthur Schnitzler
This book, which was rescued from obscurity through a wonderful new translation, is a funny, tragic novella on the corrupting influence of sudden and unexpected fame.
— Daniel Susskind (TED Talk: 3 myths about the future of work and why they’re not true)

Frankenstein by Mary Shelley
I was recently drawn again to this masterpiece, because I study how microscopic organisms live and behave and how to alter their genes and environment so they can be used as cellular factories and environmental sentinels. Shelley explores the moral and societal dilemmas of scientific exploration and the ethics and responsibilities that stem from it. It’s a must read.
— Simone Bianco (TED Talk with Tom Zimmerman: The wonderful world of life in a drop of water)

Multiple Choice by Alejandro Zambra
This seriously playful book, by one of the brightest young stars in the Latin American literary firmament, defies categorization. It calls on the reader to make parts of its narrative disappear. The book subtly alludes to the plight of “the disappeared” (i.e., Chileans who did not fit with the state’s narrative under Pinochet). But it also invites us to ask who is shaping the narratives of our own time and place. As a potent indictment of the multiple-choice test, the book will also appeal to students still smarting from poor grades in end-of-year exams.
— Jonathan Marks (TED Talk: In praise of conflict)

Aaaaw to Zzzzzd: The Words of Birds: North America, Britain and Northern Europe by John Bevis
This book is both an enormous joke and a real art piece. This dictionary of bird sounds and mnemonics will make you sensitive to the funny paradox of transcribing the amazing variety of bird sounds into human words and to the limitation of verbal elements in animal and human voices.
— Rebecca Kleinberger (TED Talk: Why you don’t like the sound of your own voice)

A Mathematician’s Apology by G. H. Hardy
This is the best book I know about the sheer beauty of mathematics. Here’s one lovely quote from the book: “A mathematician, like a painter or a poet, is a maker of patterns. If his patterns are more permanent than theirs, it is because they are made with ideas.” Apart from the “his” — I say yes, indeed!
— David Brenner (TED Talk: A new weapon in the fight against superbugs)

Brilliant Green: The Surprising History and Science of Plant Intelligence by Stefano Mancuso
Some books just change the way you look at the world. This book that asks “Are plants intelligent?” is one of them.
— Sugata Mitra (TED Talk: Build a school in the cloud)

The Future by Nick Montfort
This is a short read but a great look at some key future thinkers throughout history. Through delightfully written case studies, Montfort makes the argument that the future can be made and not predicted. It’s a must-read for anyone interested in future studies and the role that sci-fi, speculative design and big ideas play in shaping our future relationship with technology.
— Raphael Arar (TED Talk: How we can teach computers to make sense of our emotions)

Broad Strokes: 15 Women Who Made Art and Made History (in That Order) by Bridget Quinn
Not just for art historians, this book is perfect for anyone who has fallen in love with a painting, but knows little about it. Quinn takes us on her personal journey to understand why certain beautiful paintings were never given the due they deserved. Spoiler alert: They were by women! Despite the maddening fact that sexism quashed these women’s work and careers, this is a joyous and heartening read. On every page you can feel Quinn’s delight at her subjects’ resilience, impertinence and talent.
— Caroline Paul (TED Talk: To raise brave girls, encourage adventure)

Batman: Year One by Frank Miller and David Mazzucchelli
It’s a great novel about urban crime that just happens to have Batman in it.
— Chip Kidd (TED Talk: Designing books is no laughing matter)

Mooncop by Tom Gauld
Gauld’s book about a police officer looking for hope on a moon colony was a favorite for me. Too often, graphic novelists tend not to leave much for the imagination. Mooncop, on the other hand, contains long, beautiful and thought-provoking silences. It is a fast read, and I smiled the entire time.
— Safwat Saleem (TED Talk: Why I keep speaking up even when people mock my accent)

Wabi-Sabi for Artists, Designers, Poets & Philosophers by Leonard Koren
A very simple book with a very deep and complex message for innovators, entrepreneurs and even parents. No matter how elegant or precise you want to make your project — be it a book, a product or even a public policy — recognize that rough and imprecise elements are actually as important as the polished and smooth aspects.
— Ari Wallach (TED Talk: 3 ways to plan for the (very) long term)

Improv Wisdom: Don’t Prepare, Just Show Up by Patricia Ryan Madson
“We all could use a lesson on how to have fun in business and in life. Madson does a wonderful job providing strategies on how to deal with life’s many challenging situations by drawing from the maxims of improvisational theater.”
— Lisa Dyson (TED Talk: A forgotten Space Age technology could change how we grow food)

If You Want to Write: A Book About Art, Independence and Spirit by Brenda Ueland
For those who know they have something to express, these stressful times can feel a bit hopeless — it may seem impossible to find the time, skill and energy to create. This is one of the most timeless books on how to regain that hope, and it’s also a delightful read, in and of itself.
— Sebastian Wernicke (TED Talk: How to use data to make a hit TV show)

Between the World and Me by Ta-Nehisi Coates
This is a powerful read that evokes action in us all and provides a well-researched historical account of race relations in the US. Coates’ writing is excellent, and he describes how understanding starts with communication — not assumption. This book will open your eyes and increase your empathy.
— Shivani Siroya (TED Talk: A smart loan for people with no credit history (yet))

We Should All Be Feminists by Chimamanda Ngozi Adichie (TED Talk: The danger of a single story)
Adichie’s approach to the politics of gender is sharp and funny and really accessible. Without ever seeming idealistic or naive, she uses her superhuman compassion to imagine a future in which women and men have more possibilities for how to be at home in the world.
— Mandy Len Catron (TED Talk: A better way to talk about love)

The Third Stage of Life: Aging in Contemporary Society by Daisaku Ikeda
Ikeda is the president of Soka Gakkai International Buddhist Organization. Drawing on the lives of individuals, this book speaks to the challenges and opportunities of aging. Its perspective is that the third stage in life is like a third youth. Youth does not fade with age, as long as we refuse to be defeated, continue to learn and grow with a positive attitude, and enjoy the spirit of challenge. This book inspires readers to seek an inner revolution throughout their lives.
— Paul Tasner (TED Talk: How I became an entrepreneur at 66)

Proxies by Brian Blanchfield
In this book of essays, Blanchfield backs away from books, from Wikipedia, from the internet and asks himself: “What do I know?” He writes about foot washing, chatroulette, hide-and-seek, and mothers, among many other topics. His writing weaves erudition and sharp analysis with autobiography, poetry and humor. This book, more than anything, is an examination of an alternative method of knowledge production — “How do I come to know something?” — one that takes accuracy and inaccuracy, memory and misremembering, shame and truth and misdirection all as equally valid points of departure.
— Oscar Schwartz (TED Talk: Can a computer write poetry?)

The Sense of Wonder by Rachel Carson
This short, beautiful memoir by the famous author of Silent Spring — the groundbreaking warning about the costs of chemical pollution — came out half a century ago. It chronicles Carson’s beach walks with her nephew and her unfolding understanding of the power of a child’s wonder and surprise at nature. An inspiring read for those who would like to share nature’s pleasures with a child and rediscover their own sense of wonder.
— Emma Marris (TED Talk: Nature is everywhere — we just need to learn to see it)

Survival in Auschwitz (If This Is Man) by Primo Levi
This is an iconic memoir of a year in Auschwitz by an Italian Jew. Deeply psychological and insightful, it is a breathtaking analysis of what becomes of people forced into a setting that is designed to destroy one’s inner being and life.
— Deborah Lipstadt (TED Talk: Behind the lies of Holocaust denial)

A Room of One’s Own by Virginia Woolf
Many of us had Virginia Woolf as required reading at some point in our schooling, but I think her works are worth revisiting as an adult. Woolf’s intended audience in this book is women writers, but it’s just as relevant to social scientists or anyone looking to examine patriarchal culture. Her observations and insights are just as meaningful now, nearly a century later, as they were when she first wrote this extended essay, unfortunately.
— Sofia Jawed-Wessel (TED Talk:The lies we tell pregnant women)

Take This Stallion by Anaïs Duplan
An hour with this book will change even the pitch of your internal thoughts, as poet Duplan reshapes it with her vivid and hypnotizing words. Each poem promises a new and reviving experience, whether it’s the hypothetical secret philosophical life of Kardashian-West or a peanut salesperson knocking on a door. Duplan’s writing is bold and dangerous, rough and intelligent, angelic and humble. It has the power to look into readers’ souls and know them.
— Siyanda Mohutsiwa (TED Talk: How young Africans found a voice on Twitter)

The Conference of Birds by Peter Sis
This is a book you could read over and over for the rest of your life, at the very least for its graphic beauty. Sis animates a 12th-century epic poem by Sufi mystic and poet Farid ud-Din Attar that takes readers on a spiritual quest through adversity, uncertainty and human weakness through the metaphorical experience of birds.
— Nabila Alibhai (TED Talk: Why people of different faiths are painting their houses of worship yellow)