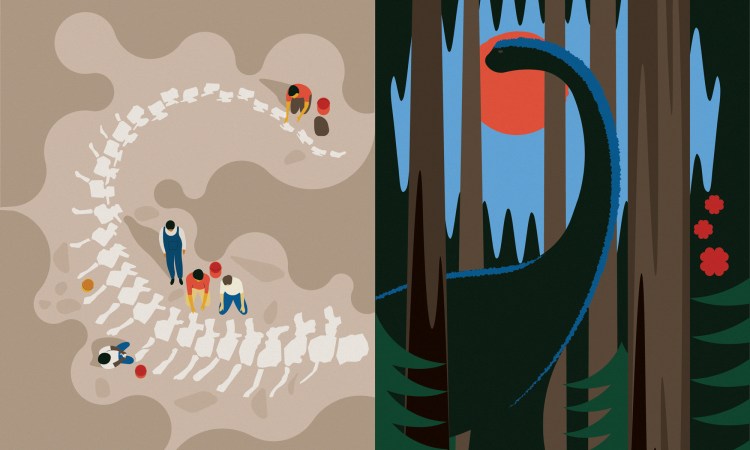 They’ve become synonymous with the failure to adapt, but dinosaurs were actually marvels of speed, size, power and versatility, explains paleontologist Kenneth Lacovera. And they could represent one of our best hopes for the future.

Albert Einstein was a complete and utter failure. It’s true he revolutionized science, invented our current framework for understanding the cosmos and bent our very perception of space and time. The principles he laid down made possible the development of GPS, digital cameras, cell phones and countless other products. Computers and semiconductors would not be possible if not for Einstein’s March 1905 paper setting forth his particle theory of light; a few months later, he cinched the case for the existence of atoms. Arguably, the modern age would not have come to be or would have been delayed without his accomplishments.

Yet where is Einstein now? Dead, that’s where. Despite his stunning intellectual prowess, his ability to completely disrupt and replace our view of the cosmos and his heroic achievements that improved the lives of every human to follow, he died from an abdominal aortic aneurysm. Unable to adapt to the sudden and dramatically changing conditions in his own body, Einstein departed life at age 76. We must now conclude that his legacy is a cautionary tale about eventual obsolescence.

Preposterous! Of course. It would be the height of absurdity to conclude that Albert Einstein’s towering accomplishments should be sullied by his own mortality. He was a great man, but a man nonetheless — a human, a Homo sapiens — every one of which lives for some short while and then dies. It’s what we organisms do. Marie Curie, Benjamin Franklin and Charles Darwin are no less great because they died. To argue otherwise is ridiculous.

Dinosaurs pushed the envelope of physiological possibility, broke record after record and were paragons of success by almost any measure.

Now that we’ve dispatched that line of reasoning, I’d like to pose a question: why do we besmirch the legacy of the dinosaurs using the very same foolish argument? How did the word “dinosaur” become an epithet to invoke an inability to adapt to changing conditions? Crack open the Merriam-Webster Dictionary, and you’ll find dinosaur means “one that is impractically large, out-of-date, or obsolete.” In the queen mother of all English lexicons, the Oxford English Dictionary, you will find a dinosaur can be quite properly used to refer to “someone or something that has not adapted to changing circumstances.”

I could fill a book with contemporary defamatory comparisons to dinosaurs. IBM is an “IT Giant Commonly Viewed as a Dinosaur,” one headline read. “Intel: A Dinosaur Headed for Extinction?” pondered an investment site. “Both Major Parties Are Seen as Dinosaurs— Old Institutions That Do Not Fit the Times or Challenges of the Day,” opined the Wall Street Journal.

To all that, I say humbug! They should all hope to be so lucky. What CEO wouldn’t daydream about global dominance spanning a geological era? What board chair wouldn’t crave the rapid growth of thousands of successful franchises the way that dinosaur species exploded across the globe? What head of R & D wouldn’t revel in the development of unprecedented feats of speed and size and power? Dinosaurs pushed the envelope of physiological possibility, broke record after record and were paragons of success by almost any measure.

Considering their breathtaking adaptations, such as titanic size, devastating power, extravagant plumage, razor-sharp teeth and bizarre spines, plates, horns and clubs, the public adoration for them is not surprising. What is surprising is our dichotomous relationship with them. How did these versatile creatures, arguably the most successful group of large land animals in Earth history, get labeled as the epitome of prehistoric failure?

Crackpot theories for dinosaurs’ extinction abounded — mammals ate all their eggs. Or, maybe all the fiber-rich plants died, and they all perished of constipation.

The most damning misconception about dinosaurs is the idea that their extinction represents their failure to change. If only they weren’t such dim-witted, sluggish, stuck-in-the-mud, ponderous creatures, maybe they could have survived and hung on. But they weren’t good enough. Not clever enough, like our own tiny ancestors. They couldn’t hack it, and the cream, like it always does, rose to the top. The mammals took over, and here we are, smarty-pants primates, with dominion over the Earth.

Crackpot theories for their extinction abounded. A pandemic killed them. Mammals ate all their eggs. Their shells got too thin. Maybe all the fiber-rich plants died out, and they all perished of constipation. Maybe they were just too dumb to live.

The nature of their disappearance remained a total mystery until 1980, when Luis and Walter Alvarez (a father-and-son team) presented evidence that the dinosaurs did not fail to thrive — they were murdered. Snuffed out by a space rock that unleashed hell on earth. It took decades for this idea to catch on, particularly with paleontologists, but most now seem to have finally come around to it. 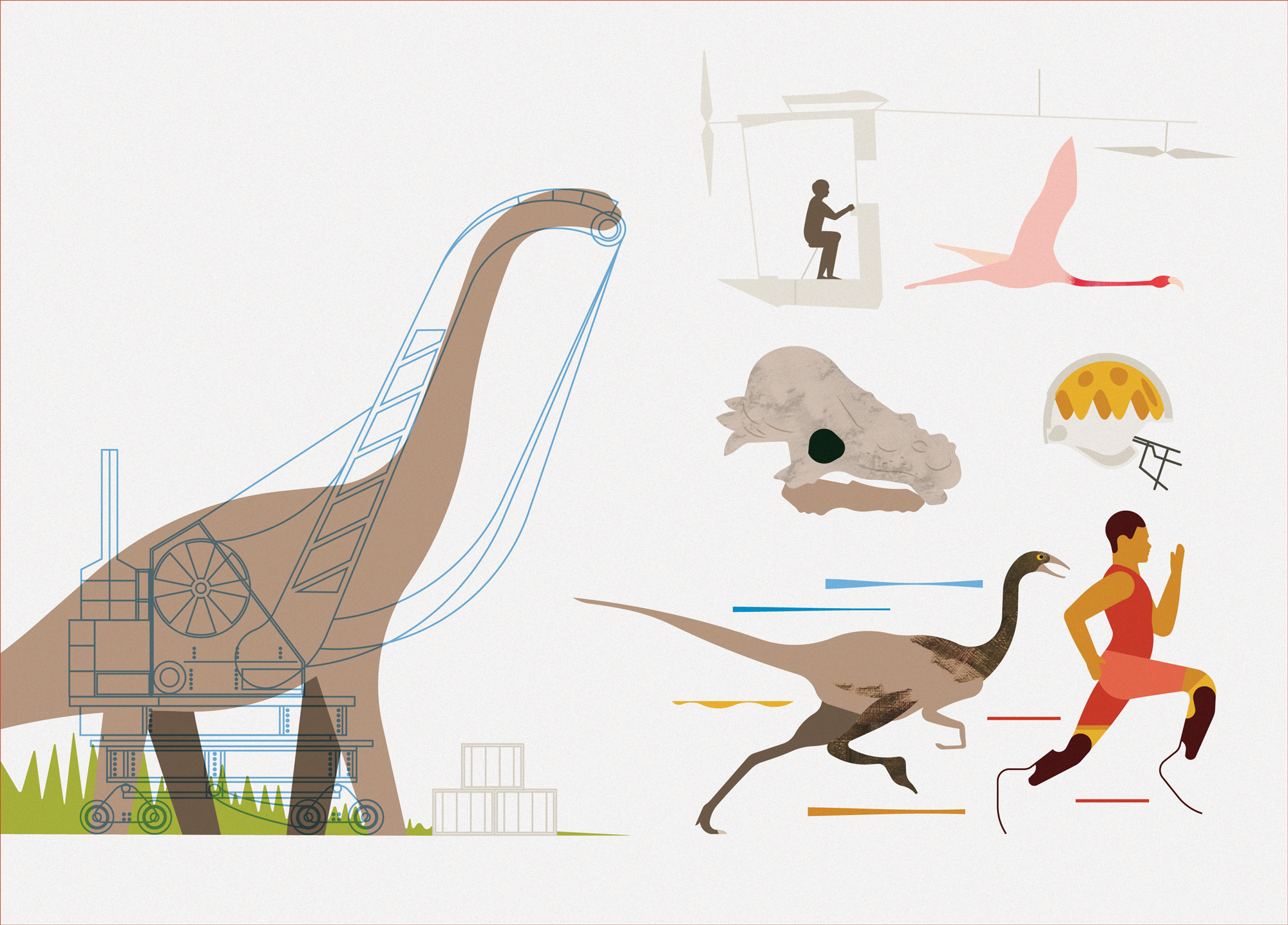 Dinosaurs, exculpated from blame in their own extinction, should no longer bear the tarnish of failure. They were, and still are, an unqualified success. What’s more, we can learn from them. We should learn from them. To do otherwise would be foolish and arrogant.

Dinosaurs are long-lasting champions of resilience and persistence. They reigned unchallenged for the better part of 165 million years. And that’s only if you exclude birds. If you include birds — known now as avian dinosaurs — their incredible run has yet to pass and spans the last 231 million years. Primates have been around for about 56 million years. Our human lineage split from the line leading to chimpanzees six to seven million years ago, and our own species appeared around only 200,000 years ago.

Perhaps it is fairer to compare all mammals and all dinosaurs (avian and non-avian). Our forebears, shrew-like creatures with the unlyrical name morganucodontids, first appeared about 210 million years ago. That’s a respectable run. But by the time of their first appearance, dinosaurs had already walked the Earth for 21 million years. And if every bird on every continent were to die today, mammals would not surpass the temporal success of the dinosaurs until roughly the year 21,002,017.

To be a dinosaur is to belong to a staggeringly successful group of animals whose reign across time may never be matched by humans or any of our mammalian kin.

Dinosaurs are ancient and contemporary. Across the blinding ice sheets of Antarctica, through the cacophonous forests of Amazonia, atop the withering heights of the Himalayas, in oases dotting the Sahara, and in a million other places — including your backyard bird feeder — the exquisite adaptations and enduring persistence of the dinosaurs is on display.

As biologists expand their understanding of modern avian dinosaurs, paleontologists are venturing to the far-flung corners of the globe and uncovering ancient dinosaurs at an ever-increasing pace. From their discovery in the early nineteenth century until the mid-twentieth century, the recognition of new species was a rare event, about one per year. In 2016, 31 new dinosaur species were described! Every year, we discover that dinosaurs were more widespread, more diverse and more amazing than we ever dared to imagine.

This treasure trove of information comes at an auspicious moment. As we move into an uncertain environmental future, it has never been more important to understand the past. Want to design a system to move heavy loads over rough terrain? Dinosaurs did that. Want to understand mostly passive and efficient cooling systems? Sauropods were experts. Interested in upcycling, in repurposing technology? Look to the dinosaurs. Feathers are a marvelous example of exaptation, or the process of acquiring functions for which they were not originally adapted. Interested in resilience? Avian dinosaurs survived the worst catastrophe in last quarter billion years, and today outnumber mammalian species by more than three to one. Since da Vinci, and probably long before, humans have been fascinated with self-powered flight, something that we’ve been unable to substantially achieve. Dinosaurs did this 150 million years ago.

Hardly the embodiment of obsolescence, more than 18,000 species of avian dinosaurs flit, trod and swim about our planet today. To be a dinosaur is to belong to a staggeringly successful group of animals whose reign across time may never be matched by humans or any of our mammalian kin.

Global warming, sea level rise, the catastrophic degradation of our environment and the heartbreaking and costly biodiversity crisis all loom large on our horizon. People, even paleontologists, are more concerned with the future than with the past. But we don’t have access to the future. We can make no observations of it and can conduct no experiments in it. As for the present, there’s not much to it, a wisp of time separating that which can be from that which has been. The sentence you are reading is already in your past.

But the past can be embraced. It’s in the hills, under the oceans. You can hold it. Crack it open. Put it in a museum for all to see. Most important, the past is our guide to the future, the only one we will ever have. When the bank robber Willie Sutton was asked, “Why do you rob banks?” he replied, as the story goes, “Because that’s where the money is.” Why study the past? Because that’s where the answers are.

No analogies are perfect, and the ancient record does not contain all the answers. But we would ignore it at our peril. Winston Churchill reportedly said, “The further back you look, the further ahead you will see.” Only the past provides the broad view that we desperately need to prepare for the future. We can now gaze out upon Earth’s ancient worlds from many vantage points; vistas cut through time for the passage of our imagination. Each view has much to teach us, but no lookout commands the attention and holds the allure of the precipice on which we stand when we view the ancient world of the dinosaurs. 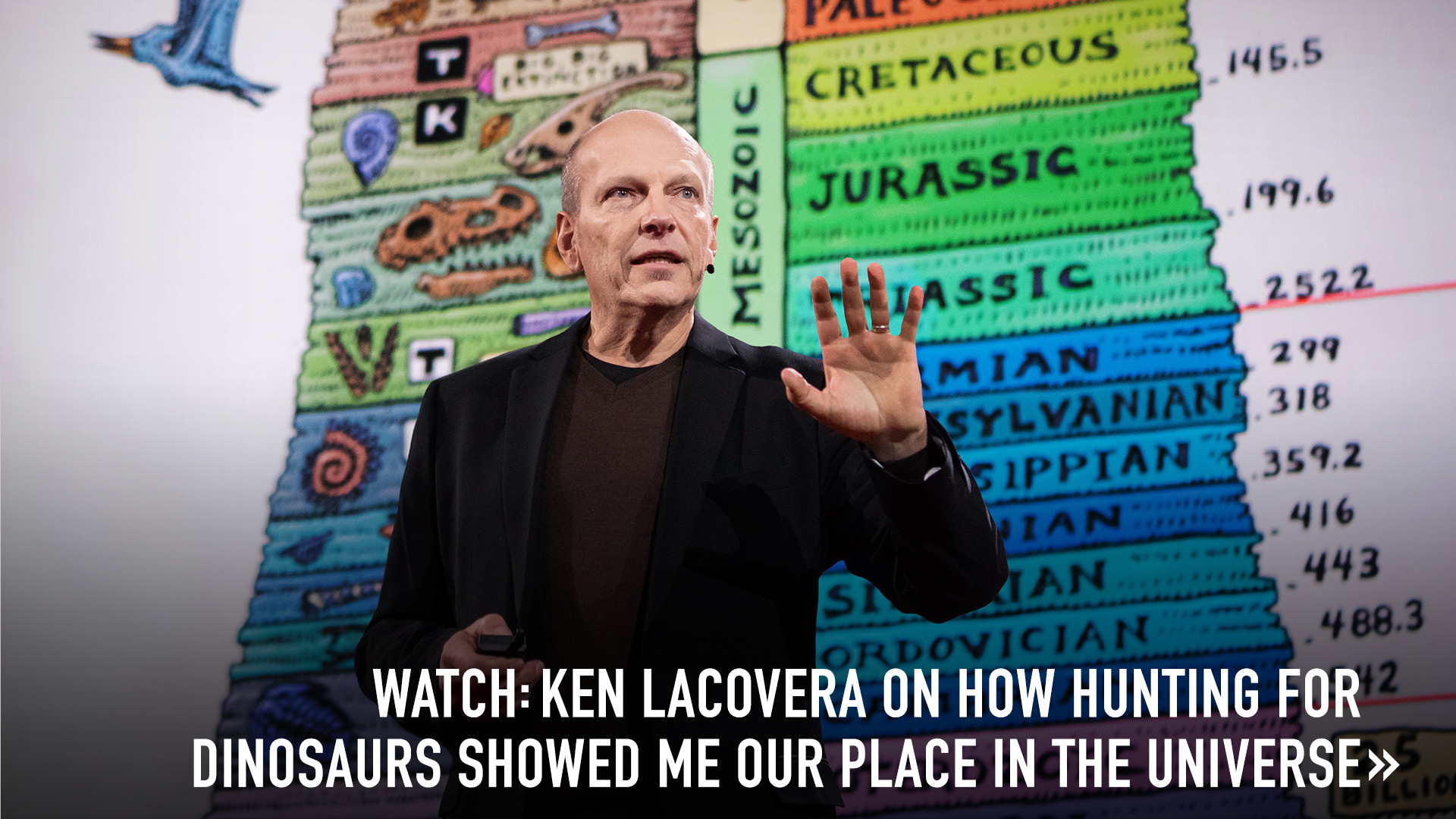 Kenneth Lacovara is the founder and director of the Edelman Fossil Park of Rowan University in New Jersey. He has unearthed some of the largest dinosaurs ever to walk the planet, including the super-massive Dreadnoughtus, which at 65 tons weighs more than seven T. rex.