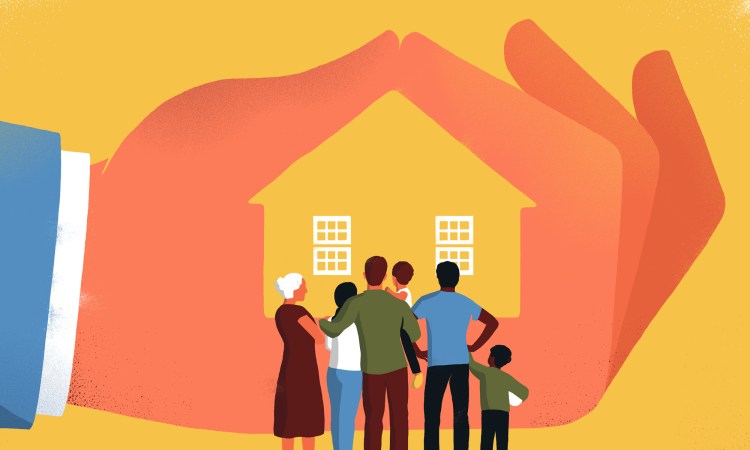 It’s time to ensure that no American has to worry about where they and their families will sleep tonight, says housing consultant James Stockard.

There’s a lot of talk these days about how we can make America great again, with politicians, academics and journalists looking for the answers in areas that include increased defense spending, infrastructure investment and job programs. But after spending nearly 50 years consulting on housing at the local, state and national levels, I believe there’s one cornerstone element of a great nation that is being overlooked: decent, affordable housing. Roughly 19 million households in the US earn incomes that are low enough to qualify for housing assistance, but only 24 percent of them receive support because there simply aren’t enough affordable housing units or vouchers.

The US needs to declare a basic right to affordable housing, and then deliver it to the people. This may seem like a dramatic idea. Then again, so was the notion that women be allowed to vote in 1920, or that African-American children be entitled to go to the same schools as white children in 1954, or that people of the same gender be legally permitted to marry in 2014. When America is at its best, when we are truly great, we’ve shown that we are a nation that continues to expand its citizens’ rights and protect their newly-recognized rights.

It’s fiscally smart. Providing permanent housing is, by far, the least expensive way to provide shelter for those who need it, as shown in a nine-city study from the Lewin Group (and research by the US Department of Housing and Urban Development, the National Alliance to End Homelessness and other groups). Without it, people end up in overcrowded apartments, homeless shelters, hospitals, institutions for the mentally or physically disabled, jails or on the street. Each of these alternatives costs taxpayers substantially more than paying for permanent places to live. For example, $10,000 in public funding covers 10+ months of permanent affordable housing — but only 6+ months in a shelter or one week in a hospital.

It’s socially responsible. Over the course of 40 years as a commissioner of my local public housing authority in Massachusetts, I’ve learned that people who struggle with housing frequently have little time to do anything else. They’re constantly worrying about how to cover the rent, or where they’ll sleep, or what they can do fight off an impending eviction. I’ve heard hundreds of stories from desperate men and women appealing for “emergency admission” because they had lost their job, or were escaping an abusive relationship, or were asked to leave a family member’s home after doubling up with them for six months. (Read Evicted by sociology professor Matthew Desmond for gut-wrenching stories of housing instability in Milwaukee.) As a result, people without stable housing have little time or energy to contribute to their communities.

It gives children a good start in life. The typical child in a family without permanent housing changes schools three or more times a year, according to the National Law Center on Homelessness and Poverty. This means every year they must adjust to three (or more) different teachers, curriculums, school cultures, and groups of classmates. What are the chances that a child will flourish under these circumstances? Some will succeed despite the odds, but most won’t.

A right to housing is a given in much of the rest of the world. It was part of the Universal Declaration on Human Rights, an international commitment that was adopted by the United Nations in 1948 and signed by 130 nations (including the US). South Africa and more than 50 other nations state a person’s right to housing in their constitutions. Most European countries affirm this principle, either in writing or in practice.

Recently, I spent six months in Scotland studying their housing programs and spoke to more than 50 government officials, nonprofit developers, community advocates and academic experts. With each person, I asked: “Is there an assumption in Scotland that it is a civic responsibility to make sure every person has a decent, affordable place to live?” Their answer was always some variation on “Well, yes, of course” — many of them were puzzled that I’d even had to ask. Backing up that assumed responsibility for housing, the government of Scotland committed three billion pounds, about $3.8 billion, in 2016 to build 50,000 new affordable homes over the next five years, a significant investment for a country with a population of 5.4 million, or about 1.7 percent of America’s.

Meeting the goal of an affordable place to live for every American faces two primary roadblocks: money and regulation. Right now, “affordable housing” allocations make up about 1.1 percent of the national budget, or $41.8 billion, and serve about one-quarter of the people who need assistance. So quadrupling that amount in order to cover everyone would bring it up to 4.4 percent, or $168 billion. This may seem like a large amount — but not when you consider that the US government already spends roughly $150 billion a year on the mortgage interest deduction clause in its tax code, which subsidizes homeownership for its wealthier citizens. The regulatory issues are trickier, because zoning and other local rules are often used to prevent the construction of affordable homes. In addition, the US Department of Housing and Urban Development (HUD) governs the housing industry, and in my decades of experience, it can be a nightmare for developers in towns and cities. Local politicians also face challenges in approving affordable housing developments when residents complain — out of fear and ignorance — that their property values will suffer. The NIMBYs usually win.

We need to come up with creative solutions to zoning problems. In Massachusetts, for example, the state’s Chapter 40B legislation allows developers of affordable housing to apply for exceptions to local zoning laws if ten percent of the community housing stock doesn’t already consist of affordable housing units. If the municipality rejects the application, the developer can appeal to a state board. The state board has overridden local zoning laws in 95 percent of the cases brought before it in the past 48 years, resulting in the construction of over 50,000 affordable homes. While the process is very slow and each development must be reviewed by many people at the local and state levels, complexes have eventually been built. Perhaps it’s time for a national Chapter 40B?

Americans are fortunate enough to live in one of the wealthiest countries on the planet; it’s time to commit to the principle that all of the nation’s citizens have the right to a decent home that is within their means. It’s one national investment from which we’ll all reap the dividends. My friend Clorae was a single parent with nine children, and she was lucky to find a home in public housing. Today those nine kids include a doctor, a professor, two schoolteachers and a local HUD official. Thanks in part to having a permanent, affordable home, Clorae was available to help her kids reach their full potential. Don’t we all want to live in a nation that assures the Cloraes among us have the opportunity to nurture these kinds of future citizens? Surely the hallmark of any great nation should be one in which no one — no elderly person, no person with a disability or chronic illness, no newly naturalized American, no person working full-time at a minimum wage job, and certainly no child — should wonder where they’ll sleep tonight.

James Stockard has worked as a consultant with nonprofit groups and public agencies across the country on affordable housing and community development. He was the curator of the Loeb Fellowship at the Harvard University Graduate School of Design for 17 years.