Why do we give out red envelopes for the Lunar New Year? 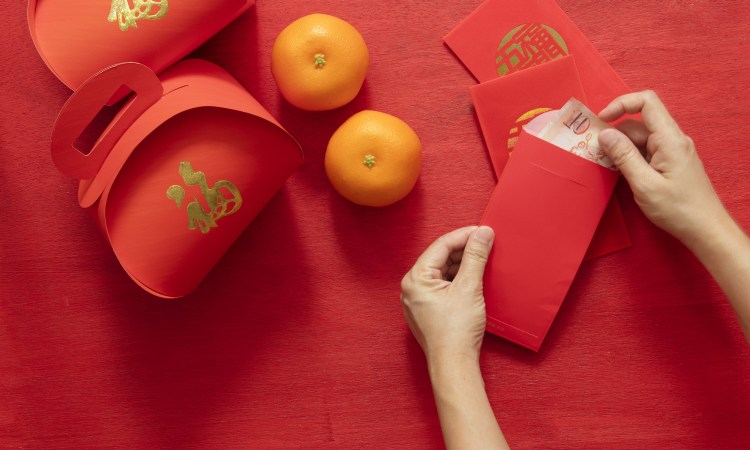 A warm look at the Chinese legends and rituals of one of the most important festivals in the world, as shared by entrepreneur and Chineasy creator ShaoLan Hsueh.

The Lunar New Year is a joyous, noisy winter holiday — its days are filled with parades, bright red signs and banners with good-luck messages, and firecrackers. For people in many countries around the world, it’s a time for annual family gatherings that feature special gifts and meals … and more firecrackers.

If you’re ever wondered “Why firecrackers? What do those red signs say?” these traditions are tied to an ancient Chinese legend.

Once upon a time, there was a fearsome monster called Nian (年, pronounced Nián). Every year, before the spring arrived, Nian would emerge from his den and hunt for prey. His favorite things to eat were children and livestock. People lived in fear of him, and they’d board up their houses before going somewhere to hide. As the residents of a village were packing up for their escape one year, an ancient man visited, begging for food. He was a stranger, and the people were too busy running away to tend to him. However, one kind old lady gave him rice and urged him to flee with the rest of the village. The old man said, “If you let me stay in your house for one night, I can promise you that the monster will never come back again.”

She was skeptical, but the beggar said, “Just leave it to me. I have a secret weapon to help fight this thing.” Although she let him stay at her house, she departed with everyone else. That night, the monster came to the village and saw candlelight shining in the window of one house. He approached the door, licking his lips, ready to pounce on the poor victim inside. But before he could enter, he saw three red banners that had been hung around entrance and he paused. The energy radiating from the talismans made him dizzy, but he was too hungry to care. He went on, desperate for a late-night meal.

Suddenly, the old man appeared. He tossed bamboo sticks into a bonfire that he’d prepared earlier. When the bamboo heated up, the air sealed in its hollow chambers expanded, and produced an explosive “Boom!” The noise startled the monster, and he ran away, never to be seen again.

The villagers returned the next morning, and to their surprise, the old man was safe and sound. He told them, “As long as you place these red banners on your door frames and light firecrackers on New Year’s Eve, Nian will never attack you.” The old man then rose in the air like a feather blown by the wind, and the villagers realized that he must have been a fairy …

That legend is why Chinese people started causing explosions on the eve of the New Year and hanging up red-paper signs. After gunpowder was invented 2,000 years ago, firecrackers replaced bamboo. Many people still believe that lighting firecrackers and fireworks will scare away the evil spirits of the past year and celebrate the coming of the new year. In fact, Nian, the name of the monster in the legend, is the word that the Chinese use for “year” (年). The color red became associated with ensuring good luck and banishing bad luck, so besides displaying decorations of that hue, celebrants began wearing red clothing and giving out red envelopes.

The Lunar New Year is now the most important annual festival in China and in many other Asian countries. During the holiday, millions travel to reunite with their family members. The number of journeys made by people in China in 2017 for the New Year was nearly three billion, in what’s thought to be the world’s largest annual human migration.

When I was a child in Taiwan, my parents would put me and my two sisters in the car and we’d drive to visit my grandparents for New Year’s Eve. Because there was so much holiday traffic, the 220-mile journey could take up to 12 hours. For three little girls, it felt like we were stuck in a giant parking lot on the highway, and I used to complain. But after I grew up, I became appreciative and grateful that we, as a family, were always together for the beginning of the new year.

In addition to gathering with relatives, giving and receiving red envelopes was one of my favorite activities of the New Year. As a kid, I loved getting up early on New Year’s Day because it was my time to collect the cash-filled envelopes from my parents, uncles, aunts and grandparents. I saved all the money I received, and by the time I turned 18, the sum was enough to pay for my university fees. (Those long car trips really paid off!)

After the elders distributed the red envelopes, it was the time to worship our ancestors. We’d all kneel on the ground in front of a monument inscribed with their names and bow to them. Then my cousins and I would run around the courtyard and play before the giant luncheon, which is the equivalent to Thanksgiving dinner in the US. There are many traditional dishes that families serve at the meal to guarantee an auspicious year, including whole fish (the Chinese word for fish, “Yu” or 魚, is a homonym for the word that means abundance or surplus); noodles (which symbolize long life); dumplings (representing wealth because they’re shaped like ingot, the blocks of gold used as ancient Chinese currency); whole chicken (symbolizing reunion); hot pot (also symbolizing reunion); and a sticky New Year cake called Nian Gao (年糕, which means doing better year by year).

There were also many New Year’s superstitions we followed. These included doing a massive house cleaning before New Year’s Eve (you’re symbolically getting rid of the old and bad and embracing the new and good), not throwing out garbage for the first five days of the year (or you risk throwing out any good luck); and when eating fish, never consume the entire fish (if you do, your savings will run out before the end of the year).

As an adult, I’ve continued practicing many of the same traditions that I grew up with. I still exchange red envelopes; have New Year’s feasts with lucky dishes (especially on the Eve); visit my grandparents, relatives and friends; and hang red signs around the doorframe. Because my mother is a calligrapher, we usually make our own signs — with messages like “Good Fortune” and “Prosperity” — but most people buy them.

2018 is the Year of the Dog. The Chinese zodiac consists of 12 animals: Rat, Ox, Tiger, Rabbit, Dragon, Snake, Horse, Sheep, Monkey, Rooster, Dog and Pig. Why this dozen? It’s said the Jade Emperor decided to hold a race to choose the creatures that would make up a new calendar. There’s no Cat because, as the legend goes, Rat deliberately did not wake up Cat on the day of the race so that Rat could win. To this day, it’s why rats and cats don’t get along.

To greet your Chinese friends during the holiday, you can say “gǒu nián wàng wàng.” Gǒu (狗 means dog); nián (年 means year, and it’s the monster’s name); wàng wàng (旺旺 is how Chinese people say “woof woof,” and wàng is also the Chinese character for “prosperous”). (Learn how to say the phrase here.)

To everyone reading this: I wish you a prosperous Year of the Dog! 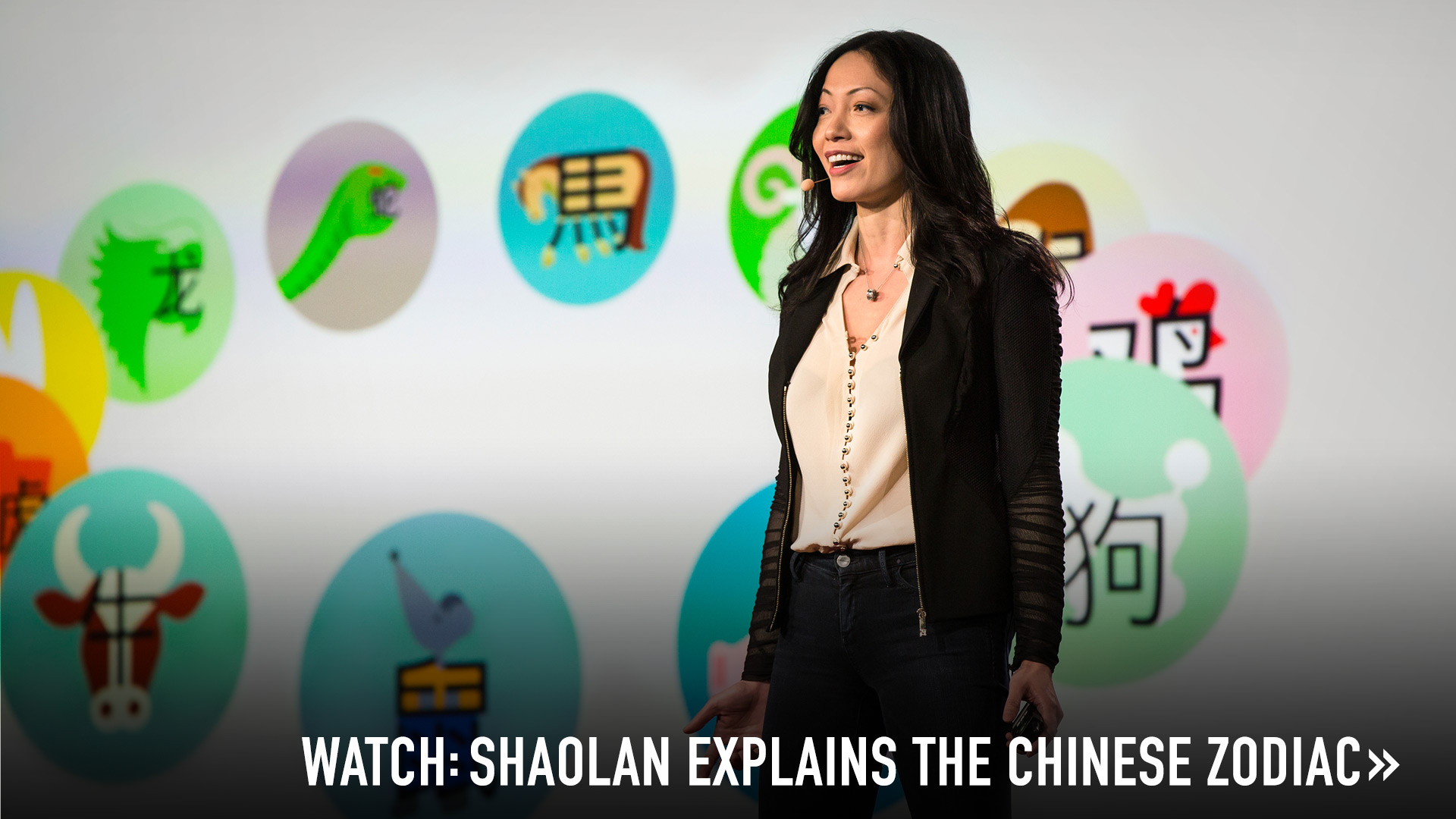 ShaoLan Hsueh is an entrepreneur, designer, author, traveller and dreamer. She is also the founder and creator of Chineasy, which she launched after her 2013 TED Talk. Today, Chineasy has become one of the most popular methods of learning Chinese outside of Chinese-speaking countries. Her aim is to help people understand China, including its culture and language, and to bridge the gap between the east and the west. 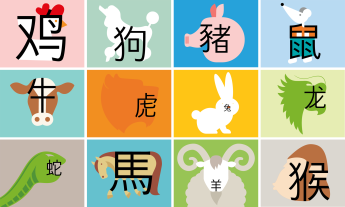 The surprising influence of the Chinese zodiac 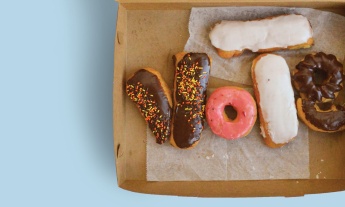