After examining dozens of Ice Age cave sites across Europe, paleoarchaeologist Genevieve von Petzinger discovered our ancestors repeatedly used 32 signs. Why? She walks us through her eye-opening discoveries — and their implications.

The title for the world’s oldest dated cave art is currently held by an unassuming red disk, at least 41,000 years old, painted on a wall inside a rock formation in El Castillo, Spain. “It’s the size of a teacup’s saucer,” says paleoarchaeologist Genevieve von Petzinger (TED Talk: Why are these 32 symbols found in ancient caves all over Europe?). “It’s this very innocuous little thing.”

For centuries, the focus of paleoanthropology (and the popular imagination) has been the representational art that our ancestors left behind in caves: eye-catching drawings of deer, horse, bison and human figures. But when she was a senior in college, von Petzinger, a TED Fellow and a researcher at the University of Victoria in Canada, was drawn to the often-overlooked abstract signs: the disks, triangles, dots, circles and lines. “There was something about them that I found much more interesting than the animals and the people,” she says. “Those are nice too, but it seemed like there were some patterns going on there, and yet there was not even enough information to even delve into it.”

Five years ago, von Petzinger set out to document and systematically catalogue the geometric signs that were created tens of thousands of years ago in Europe during the Ice Age. She started by compiling a database of the geometric signs found at the nearly 370 known rock art sites across the continent. From there, she identified gaps in the inventories at many sites and by exploring the rarely documented sites — with her husband, photographer/filmmaker Dillon von Petzinger, to capture the images — she made discoveries that hold tantalizing implications about the origin of art and the evolution of human cognition.

Though they made cave art, early humans weren’t exactly “cavemen.” Homo sapiens — modern humans, anatomically identical to us today — first appeared 200,000 years ago in Africa. Early humans probably did not live in caves, more likely in the entrances to caves. “Caves were almost like their backyard,” von Petzinger says. And while we mainly know them by their art on cave walls, early Homo sapiens likely decorated their entire surroundings. “Caves are probably a fraction of what used to be decorated,” she says. Cave art remains because it was protected from the elements — offering paleoanthropologists a unique and well-preserved look at the work of our ancestors.

How can we know the age of a cave drawing? Von Petzinger studies art made 10,000 to 40,000 years ago, in the Upper Paleolithic period of the Ice Age. (The last Ice Age spanned from roughly 110,000 years ago to 10,000 years ago.) The main methods used by paleoarchaeologists to date cave art from this time period are carbon-14 and uranium-series dating. Carbon-14 dating can determine the age of decaying organic matter, such as bones and charcoal-based paint, that’s up to 40,000 years old. It works by measuring the ratio of radioactive carbon-14, which decays, to carbon-12, which remains constant even after organic matter dies. Uranium-series dating is a more recent addition to the dating tool kit, and it can find dates that go even further back. Uranium dating works in caves that contain calcite, a mineral that’s often found in stalactites and other features of living, growing caves. Calcite, carried along by dripping water on a cave wall, can sometimes form a smooth, translucent sheet over older cave paintings. Calcite contains uranium, which decays over time — which means that if there’s calcite on a cave wall over a cave painting, that uranium decay can be measured to set the minimum age of a piece of cave art, or the date at which the calcite first covered it. “Uranium dating is where a lot of these exciting new discoveries are coming from,” von Petzinger says, “because it’s opened up a whole world of engravings and types of paintings we couldn’t date before.”

How to find the common signs that bridged dozens of caves and 30,000 years of human habitation. Over seven months in 2013 and 2014, von Petzinger and her husband visited and documented 52 cave sites in Spain, Portugal, France and Italy. She selected sites where researchers had noted geometric signs but hadn’t recorded details. After her fieldwork was complete, she analyzed all the signs she’d catalogued. And what she saw made the hair on the back of her neck stand up: across 30,000 years and the entire continent of Europe, a mere 32 signs repeated themselves over and over. How could she explain this continuity? “That really small number tells you that they must have been meaningful to the people who were using them, because they were replicating them,” she says.

These discoveries have overturned the conventional timeline of humans and art. Paleoanthropologists had long believed that art was invented during a “creative explosion” 40,000 years ago in Europe — the first Homo sapiens are thought to have migrated there from Africa during an Ice Age warm spell roughly 45,000 years ago. But von Petzinger’s research challenges this conventional wisdom. “I realized that two-thirds of the signs were already in use when humans arrived in Europe,” she says, suggesting the symbols are a continuation of an existing tradition rather than the start of something new. This radically moves back the plausible timeline for when humanity began creating and using symbols. “Some of these signs could potentially be part of a larger system that they brought with them when they left Africa,” von Petzinger says, “and then moved with them as they spread across the world.”

Could a handmark mean “I was here”? Once considered ornamental and of secondary interest, geometric signs outnumber representational images in caves by at least two to one. The 32 signs documented by von Petzinger include dots, asterisks, spirals and negative hands. Negative hands, or the negative image of a handprint, are one of the oldest signs to appear in caves, and they were most popular during the earlier part of the Ice Age (between 22,000 and 40,000 years ago). “They may have been a signal that a particular person had been at a site or a symbolic representation of a person or a group of people,” von Petzinger says. “They may even have been some sort of early sign language.” The penniform, named after the Latin term meaning “feather” or “plume-shaped,” was a later artistic invention, first appearing between 28,000 and 30,000 years ago, and might have been used to depict weaponry or trees and plants. Tectiforms, named from the Latin word for “roof-shaped,” appear solely between 13,000 and 17,000 years ago and are only found at nine cave sites, indicating it was probably a localized invention and perhaps even a clan sign or marker of a specific group’s identity.

Ice Age artists adored the color red. Von Petzinger has observed remarkable efforts by early humans to control the colors of their creations, and they exhibited a strong preference for red ochre (made from iron oxide). “At times, they were using fairly elaborate heat-treating systems to heat the ochre up to these very specific temperature ranges, which causes a chemical change and makes it a really vibrant red,” she says. “We’re almost seeing them engineering with fire.” Ancestral Homo species started using ochre over 250,000 years ago, likely for practical matters — to tan and cure animal hides, or to repel insects. “You wonder if somehow the practical and the mundane may have been their starting point, but over time, you start to see them making decisions based more on what they liked as opposed to what was the easiest or the most practical solution,” von Petzinger says. This evidence of color preference could also be an indication of the early human brain developing complex, symbolic cognitive processes.

Were Neanderthals artists, too? Another question that von Petzinger hopes to answer someday is whether Neanderthals — the original inhabitants of Europe, who lived there until going extinct roughly 30,000 years ago — were also making graphic marks. Traditionally, all Ice Age art has been attributed by scientists to our human ancestors. However, a recently identified crosshatch engraving from a cave in Gibraltar appears to have been made by Neanderthals, raising the intriguing possibility that this closely related species was creating art. “Since the two species overlapped in Europe for at least 10,000 years, it may be that some of the signs dating 30,000 years or older were made by Neanderthals instead of Homo sapiens, which would add a completely new dimension to the study of Ice Age art,” von Petzinger says.

Linked symbols might be the precursor of more complicated communication. It’s tempting to look for an alphabet or glossary in von Petzinger’s signs, but it wasn’t until 5,000 years ago that humans started to develop sophisticated systems for graphic communication. However, the 32 signs do seem to have communicative properties, and von Petzinger suggests we can possibly trace the origins of our first writing systems back to these ancient symbols. Take northern Spain’s “La Pasiega Inscription,” which dates back roughly 16,000 years and features a number of signs strung together. While a series like this was highly unusual, the “La Pasiega Inscription” just might be a very early attempt to create a more complex message, she explains. “Humans were starting to experiment in ways that may have helped lead to sentences and to the creation of writing later.”

What can art tell us about the evolution of human cognition? “Art is a really interesting window into the mind,” von Petzinger says, “It’s this very abstract, cognitively complex thing to do.” If early humans were creating signs with specific meanings during the Ice Age, it would mark a huge step forward in when we developed complex writing systems. After all, our ability to communicate graphically is one of the things that sets us apart from the rest of the animal kingdom. “Once you can store information outside of an individual, think about what the potential is to be able to pass that information onto larger groups of people and to preserve important information,” von Petzinger says. “I think those very first little steps actually helped put us on this incredible path that we’ve ended up on.” She is currently working to broaden her database to include sites in the Balkans and Caucasus, before expanding further east into Eurasia. And she’s planning an expedition in spring 2018 to go to the coast of Spain and search for submerged caves that just might have intact Ice Age art, a collaboration with underwater robot entrepreneur and fellow TED Fellow David Lang (TED Talk: My underwater robot).

For more information about von Petzinger’s work, read her 2016 book The First Signs: Unlocking the Mysteries of the World’s Oldest Symbols. 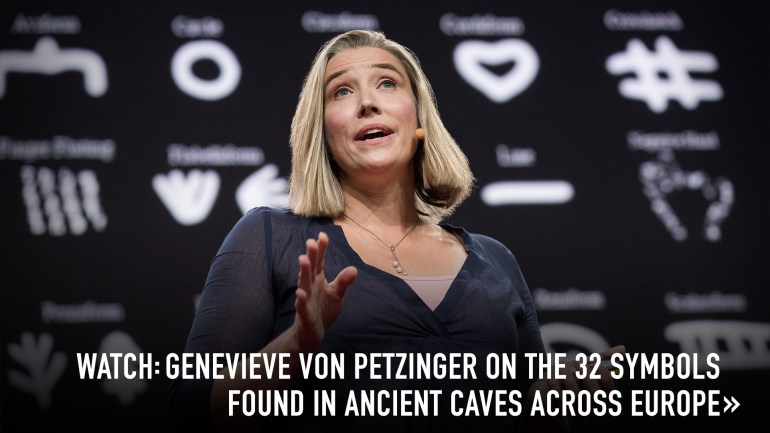