Can you tell your cavum from your cauda? Your homogenitus from your homomutatus? Those four cloud formations, along with eight others, have been added to the International Cloud Atlas, the official compendium of all things cloud. Cloud Appreciation Society founder Gavin Pretor-Pinney introduces us to them and to the wild and wonderful world above us.

For Gavin Pretor-Pinney, hell might be someplace like Yuma, Arizona, said to be the sunniest city on Earth and boasting more than 4,000 blinding hours of sunshine a year. As an ardent amateur cloudspotter and the founder of the Cloud Appreciation Society, the UK-based Pretor-Pinney spends much of his time gazing at clouds, those suspended particles of liquid water and/or ice that are, he says, an intrinsic part of our existence on Earth. “Clouds are the ever-present backdrop to human culture,” he says, affecting the weather, climate and creative imagination.

In March 2017, Pretor-Pinney played a role in expanding the vocabulary of clouds when asperitas, a formation that he was the first to bring to public attention, was included in the most recent edition of the International Cloud Atlas, the official list maintained by the World Meteorological Organization (WMO). Eleven other formations were also added. Despite their ephemeral nature, clouds in the Atlas follow a rigid classification system that starts with ten genera, or general cloud types (e.g., cirrus, cumulus), then falls into 15 species, marked by differences in shapes and internal structures, and then is divided further into nine varieties, which describe their level of transparency and visible arrangements. Here, Pretor-Pinney tells us how to identify the 12 newly-recognized clouds, including the one he considers “the jewel in the crown” of the skies.

Asperitas, which means roughness in Latin (every formation in the Atlas has a Latin name), is considered a supplementary feature, a WMO designation which means the bumpy formation shows up only in part of a cloud and not the entire cloud (such as in the case of varieties). In 2008, Pretor-Pinney first told scientists at the UK Royal Meteorological Society about it in a BBC documentary, but he didn’t think about pushing for it to join the Atlas. “I was a bit defeatist about it ever becoming official,” he admits. Nonetheless, cloudspotters lobbied for its classification and it was officially recognized in 2017. But even though it has the WMO stamp of approval, meteorologists are unsure about what exactly causes asperitas. One recent hypothesis: it’s formed when an oscillating motion from an atmospheric gravity wave or instability occurs within a highly-layered region of a cloud. At the same time, wind shear — a change in wind speed and/or direction over a short distance — is also present.

Many of the new clouds in the Atlas are not brand-new discoveries. Some have long been known to amateur observers under colloquial names — such as “roll cloud” for the formation shown here — but they’ve now received formal names and descriptions. So, roll cloud has become volutus (Latin for rolled). Volutus was the only new species included in 2017: a long, detached, tube-shaped cloud that rolls slowly around a horizontal axis. One circumstance in which it may appear is when sinking gusts of cold air spread out ahead of thunderstorms.

“In the past, the Atlas only went out to official weather observers or national weather institutions,” says Pretor-Pinney. To make it accessible to the public, the Atlas was published online for the first time in 2017 (the previous edition came out 30 years ago). Cataractagenitus — a combination of the Latin cataracta, meaning waterfall, and genitus, meaning generated — is another newbie. It’s a special cloud induced by the rising spray of large waterfalls (the WMO term “special cloud” describes formations that may form or grow as a result of localized activity such as waterfalls or wildfires).

Citizen science has transformed many areas of scientific research, from cancer to conservation — to clouds. For years, satellites were used to research formations and capture images from above. Thanks to weather watchers with smartphones, clouds are being captured from a different perspective: below. The Cloud Appreciation Society launched its CloudSpotter iPhone app in 2013, and it’s collected more than 268,000 images so far. Formations like cauda (Latin for tail), a horizontal, tail-shaped supplementary feature that extends from the main precipitation area of a severe convective storm, and flumen (Latin for river or stream), accessory clouds whose bands of low formations are also associated with a supercell storm, are being recorded across the world, providing scientists with a much larger pool of data than they had before. This photo shows both cauda (the dark line of cloud in the bottom right) and flumen (the white mass in the bottom center).

With new sources of cloud data, scientists can more closely examine formations like cavum (Latin for cavity or hole, and colloquially called a fallstreak hole), a supplementary feature whose strange appearance occurs after supercooled liquid droplets come into contact with dust, ash, ice crystals or other solid particles, setting off a chain reaction that freezes the droplets and also neighboring droplets. The ice crystals then fall, creating a hole in the thin cloud layer that often grows larger over time. Pretor-Pinney is excited for the public to learn about more about clouds and about different eye-catching formations like cavum. “The more attention we pay to the atmosphere, the more we care about it, and the more we care about it collectively, the more we think about our impact on it,” he says

Giving clouds official names serves a practical purpose. Knowing their precise type and the meteorological conditions they signify can assist with weather forecasting and aviation safety. For example, fluctus (Latin for wave or billow) occurs when horizontal wind shear causes a cloud’s top section to move faster than its bottom section. This can be hugely important information for pilots of small aircraft, who’ll want to steer clear of its winds. Fluctus is one of Pretor-Pinney’s favorite clouds. “It’s dramatic and feels like the jewel in the crown of a cloud collection,” he says. “It’s fleeting and rare, and you have to be paying attention to the sky to spot it.”

Anyone looking up can tell that people have put their stamp on the skies — homogenitus (clouds generated from human activity, such as aircraft condensation lines or contrails, shown on the left in this image) and homomutatus (human-made formations which grow and spread over a period of time into thin, cirrus-like clouds, shown on the right) are familiar sights. But the impact on Earth’s climate from these clouds isn’t fully known.

“Clouds are the wild cards that mess up [scientific] models to predict what’s going to happen to our climate over the next 50 to 100 years,” says Pretor-Pinney, “The way that clouds affect the temperature on the ground is not a simple one.” Low, optically dense clouds can reflect away the sun’s light and heat, producing a cooling effect, but high clouds, which are not as optically dense, may allow in more sunlight, trapping heat and creating a warming effect for the Earth. Scientists also don’t know how the planet’s rising temperatures will affect the type and frequency of clouds. Will there be fewer high clouds and more low clouds? Or, as one recent study suggests, will cloud tops become higher and move towards the Earth’s poles and away from the tropics where they’re most needed?

Flammagenitus (from the Latin flamma, which means fire), which is unofficially known as pyrocumulus, is a special cloud that has developed from convection sources initiated by heat, such as forest fires and volcanic eruptions. They’re similar to homogenitus in that both types originate from localized activity, but the puffiness of flammagenitus is worlds away from the stark lines of contrails. Pretor-Pinney admires clouds like flammagenitus for the imaginative possibilities they offer and the shapes they seem to harbor, which provide our psyches with some precious breathing room. “When you live in an urban environment, the sky is the last wilderness available to you,” he says. “The boundless, chaotic nature of the sky and the clouds is so valuable for people emotionally.”

Clouds have long inspired the human imagination. When asked about favorite artistic representations of clouds, Pretor-Pinney highlights the 414 B.C.E. play The Birds by Greek writer Aristophanes, in which characters dreamt of escaping to Nephelococcygia, an imaginary city in the sky popularly referred to in translations as “cloud cuckooland”, as well as the cloud studies of 19th-century English artist John Constable, who described the skies as “the chief organ of sentiment” and an essential element in any landscape painting. Constable believed that cloud formations — shown here is silvagenitus (from the Latin silva, which means forest), a special cloud created from increased humidity via evaporation and evapotranspiration over forests — could radically alter the feelings and emotions of the natural environment.

One particularly striking formation is murus (Latin for wall, and colloquially called the wall cloud), a supplementary feature formed when rain-cooled air ascends alongside more buoyant air into a strengthening, low-level updraft. This rain-cooled air, which is very humid, then saturates and forms the lowered cloud formation. “It’s that ease as it shifts that gives clouds this chaotic but also magical quality; they can appear from nowhere and disappear into the blue again,” says Pretor-Pinney. Since some murus clouds can create spouts that lead to tornadoes, they’re probably best admired from a distance.

When asked about the prime destinations to spot dramatic formations, Pretor-Pinney says he shies away from offering recommendations. He himself once traveled to a remote part of the Australian Outback to see the Morning Glory Cloud: a volutus that typically forms at the end of September and the beginning of October. He waited in vain for a couple of weeks — “it was quite tense,” he admits — before it eventually appeared. One future trip that he hopes to take is to the Salar de Uyuni in Bolivia, the largest salt flat in the world, during the summer rainy season. “Sometimes you can have these very tall clouds developing in the sky, and they’re reflected in the water on the salt flats,” he says. “And that is when you really are standing in cloud cuckooland — you’re surrounded with this sky both above and below.” 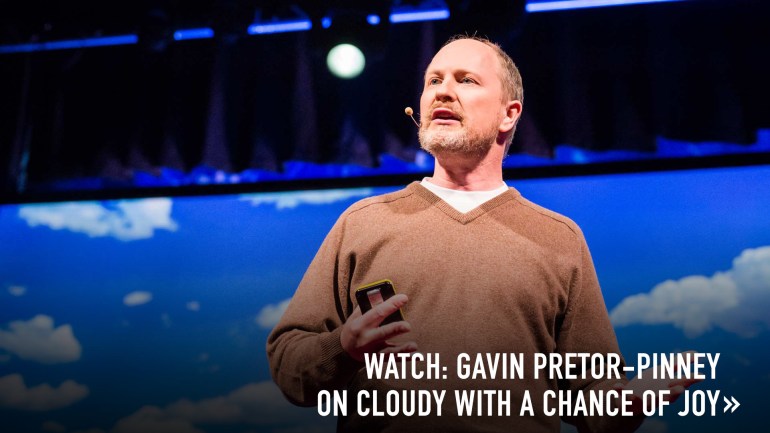 Joseph Isaac is a researcher on the content and editorial team at TED. 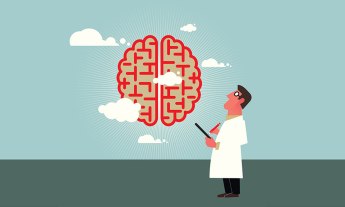 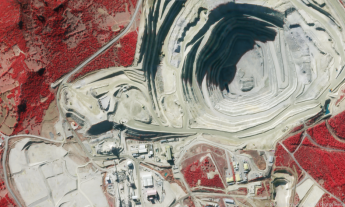 There's more to the small Skybox satellite than meets the eye. Much, much more