Ocean explorer Edith Widder shares the astoundingly sophisticated language of bioluminescent creatures, which can light up the depths of the seas like a “snow storm.”

The most spectacular gatherings of bioluminescent creatures occur in the twilight region of the sea, between 200 and 1,000 meters down, where squid, fish, shrimp and jellyfish find the ideal lighting conditions to spark up a conversation. Deep sea explorer Edith Widder first encountered one of these deep sea light shows while exploring the Santa Barbara Channel in a pressurized diving suit in 1984. “The first time was kind of peculiar because it was almost like a snow storm of light,” she says. “Other times it’s been little puffs of what looks like blue smoke. It’s different every time you dive.” But what’s truly fascinating about these light shows is they’re not just for entertainment; this is how the creatures are communicating. Take a look at some of the more sophisticated displays she’s encountered in her past three decades of dives.

Angler fish use glowing lures to attract unsuspecting prey, such as shrimp, squid or fish. The prey are attracted to something that looks tasty, but instead of eating dinner, they become dinner. “These fish actually swallow the prey whole,” Widder says, “and they’ll eat things bigger than themselves. They’re kind of like boa constrictors, so their stomachs will expand to take on pretty large prey if they happen on it, because food is sufficiently rare that they’re not fussy about what they eat.”

When a copepod detects a nearby threat, this tiny crustacean releases bioluminescent chemicals from glands on its legs to distract it, much in the way a fighter jet fires off flares to send a guided missile off course.

Bioluminescent ostracods are called sea fireflies because they use their light to attract a mate; but instead of flashing code the way regular fireflies do, they release light-producing chemicals in a series of little blobs of mucus that hang in the water. The spacing of the blobs is species-specific, so a female can recognize a male of her own kind and swim to the end of the line to hook up.

The Janicella shrimp spews bioluminescence out of its mouth like a fire breathing dragon — temporarily blinding a predator while it backflips away into the darkness.

Bet you can’t see me

Many ocean dwellers produce light from their bellies that exactly matches the color and intensity of sunlight some 800 meters below the surface. Underwater, the bioluminescence from this Abralia squid’s belly lights blur together to form the perfect cloaking device, hiding its silhouette from upward-looking predators.

Once caught by a predator, this jellyfish’s only hope for survival is to use its lights to attract the attention of a larger predator to attack its attacker and give it a chance to escape.

Touch me and I’ll slime you

When attacked, this pelagic sea cucumber flashes a warning sign: Prepare to get slimed. Just as a bank uses dye packs on banknotes to foil robbers, the sea cucumber’s glowing goo stains a predator long after an attack, making them easy targets in turn. 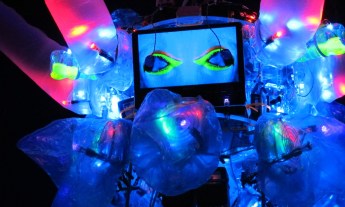 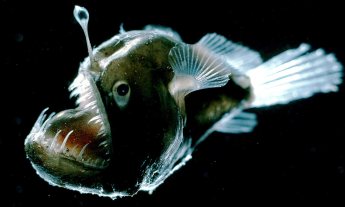