Anna Rosling-Rönnlund collects photographs of everyday objects from the richest to the poorest households. Even a toothbrush, she says, can reveal a world of inequalities.

Imagine if the world lived along a single street, with the richest households on one end, the poorest on the other — and every door flung open to the public. That’s the vision behind Dollar Street, an online photo gallery of everyday objects from more than 200 households, representing every rung of the income ladder. The Dollar Street website will launch in January 2016, according to its project manager Anna Rosling-Rönnlund (TEDxStockholm Talk: Using photos as data to understand how people live). She hopes that visitors will browse through galleries of toothbrushes, tables, shoes and toys and see how each object is transformed by the pressures of poverty. “If we’re of a certain material living standard,” she says, “it’s very hard for us to understand their sheer variety.” Here, she shares the astounding variety of “toothbrush” photographs, which she hopes will upend our very notion of luxury.

No plastic, no bristles

A woman in Malawi answers the question, “what do you use to brush your teeth,” by extending her index finger toward the camera. It’s a common response among the 1.2 billion people who live on less than a $1 a day. For toothpaste, she points to the mud walls of her hut. The mud contains abrasive sediments, which she also uses to scrub dishes and clothing as well. “She scrapes some mud off the building, she mixes it with water in her hand, and then she brushes using grains of sand,” Rosling-Rönnlund says.

A family in the west African nation of Burkina Faso puts a discarded toothbrush on display. It may appear at first glance to be an ordinary twig. Look closer, Rosling-Rönnlund says. “You can see where the branch is cut off, it’s lighter and it’s cut off in a way that it looks more like a toothpick.” For a family that cannot afford a plastic toothbrush, a sharpened stick can serve as a handy alternative. “They are picking in between the teeth and they are also scraping on top of their teeth.”

A family in Nepal slots toothbrushes handle-first into the wall, so that the bristles dry in the air. It’s a common storage system among sparsely furnished households, Rosling-Rönnlund says. “Even though the wall is not perfect, you figure out smart ways of using it to keep the toothbrushes clean. I think it’s a quite clever shelf system, and we see it in all different regions except Europe actually.”

A family in the Philippines keeps toothbrushes strategically stacked on top of a plastic chair. The fact that they have a spare chair for storage is itself a revealing sign of prosperity, as is the cleanliness of the plastic surface. “Probably they don’t have a mud floor or mud walls, because otherwise they wouldn’t be able to keep their chair this clean,” Rosling-Rönnlund says.

“I love it,” Rosling-Rönnlund says of this toothbrush holder in a Vietnamese home. “I think that is fascinating, coming up to this top income segment, we have all these varieties of toothbrushes.” One sure sign of the family’s purchasing power: flashy toothbrushes, like the bright pink one above, which reveal that the family can afford a variety of designs tailored to adults, children or personal taste.

“This is like the top notch for tooth-brushing,” Rosling-Rönnlund says of this French household’s electric toothbrushes. “Even though you can actually change the top part, the toothbrush part, and use the same handle, they have had money to buy one each, so they don’t have to go through that hassle.” Even more revealing is the absence of children’s toothbrushes from the bathroom. “The parents are no longer brushing their teeth in the same room as the children, so they can separate and have a more elegant setting for the adults.” The perfume bottle, for instance, doesn’t have to be placed out of the children’s reach. It’s an unimaginable design decision for the 1.2 billion people who still view a single, plastic toothbrush as an unaffordable luxury. 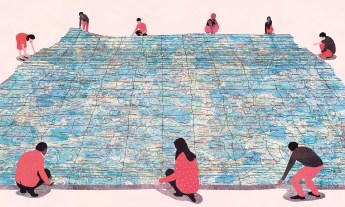