Who says homes need to be built out of bricks and mortar? Or that blimps can’t be used for public transport? Architect Mitchell Joachim shares his remarkable concepts for creating earth-friendly next-gen urban human habitats.

Joachim is founder and co-president of the nonprofit architecture group Terreform ONE, a Brooklyn-based multidisciplinary think tank working at the intersection of design, engineering and synthetic biology. Positing original solutions to pressing environmental issues, he and a small team create provocative fusions of the natural and human-made worlds through their concepts, thought experiments and proposals. “There’s no place on earth that hasn’t been affected by humans influencing the environment,” he says. “And it’s all becoming this one new nature. I just see ‘city’ as another version of that nature, no different than Yosemite in many ways.”

Joachim acknowledges that most of Terreform’s projects and technologies may never be realized; their work is often published in research journals or displayed in museums and galleries. “The more interesting the idea is, the more provocative the idea, the more it resonates historically — it becomes an important piece of the puzzle, eventually leading towards the solution,” he says. Here, he shares his radical visions for remaking our cities.

The planet is facing enormous ecological difficulties, including climate change, overpopulation, food scarcity and rising sea levels. If we’re going to live through these challenges comfortably, productively and indefinitely, we need sweeping architectural responses that rethink our relationship with the environment, says Joachim. That’s the guiding principle behind Terreform ONE’s approach. Take the Resilient Waterfront proposal, which combines natural sedimentation techniques, grasses and repurposed parts of old US Navy ships to create storm-resistant barriers for Red Hook, Brooklyn. Or Super Docking, which envisions a Brooklyn Navy Yard integrated with the river. With facilities to clean polluted water, pedestrian walkways and clean-tech office towers, the project retrofits disused docks to form a self-sustained waterfront on the 300-acre property. The Super Docking proposal led to the creation of the co-working facility that now houses Terreform HQ: the Navy Yard’s New Lab.

Architecture and nature must be fully and holistically integrated

If our future on earth is going to be fully sustainable, human and natural creations can’t exist in separate silos. “Our team designs with life,” Joachim says. “Instead of using projective models in a computer or copying the ideas of nature in some form of biomimicry, we’re directly working with nature.” Take his Fab Tree Hab. The project utilizes the 2,500-year-old art of pleaching — in which the branches of living trees (like elm, oak and dogwood) are woven to build everything from hedges to furniture — to construct a three-bedroom, one-bathroom home. Reusable, 3D-printed scaffolding holds branches in place, while bioplastic windows flex as the house grows, an active solar hot water system heats the residence, and a roof-top trough collects water for human use. The Fab Tree Hab is not only completely integrated into the natural environment and self-reliant, it also positively contributes to the local ecosystem by producing oxygen, helping scrub the air of pollutants, and providing habitat.

Joachim’s Meat House, for instance, imagines a house created entirely from pig cells — but without harming any animals. How does that work? In theory, a custom 3D printer could print lab-grown extracellular matrix from pigs into shapes that can construct a house. Using fatty cells for insulation, sphincter muscles for doors and windows and flesh preserved in sodium benzoate for the exterior, the structure could become what Joachim calls the human “extended phenotype.” “Spiders have a web; that’s their extended phenotype,” he says. “The meat-cell project was about looking at an actual biological structure that we can design that makes an extended phenotype.” However, the project is about more than building a house out of meat, points out Joachim; it’s about designing new technologies and materials for large-scale construction.

Eliminate the concept of waste

Currently, New York City alone produces 38,000 tons of organic and inorganic refuse — in a single day. “If I was some alien from outer space, I’d think that New York City was designed to make waste,” Joachim says. For a livable future, he believes we’ll need to take steps toward eliminating garbage altogether. In the Rapid Re(f)use proposal, he envisions repurposing trash as building blocks for areas of new urban development. With trash sourced from the now-closed Fresh Kills Landfill, the project would use 3D printers to turn the waste into usable construction material. (Remember Pixar’s Wall-E? It’s basically that.) In fact, the staggering amount of refuse stored at Fresh Kills could provide the foundations for seven new Manhattan-sized islands, according to Joachim.

Build vehicles around the city, not the other way around

The 20th-century city, Joachim says, was designed around automobiles — which he sees as heavy, dangerous, wasteful metal boxes. He and his team wanted to design technology that worked with cities instead. So they devised different kinds of vehicles made from soft, lightweight materials (for safety and easy storage) with new wheel systems (for greater control and flexibility), as well as airborne transport systems utilizing dirigibles and jetpacks. The SOFT Blimp Bumper Bus is a low-flying blimp with soft hanging chairs so passengers can easily hop on and off. Joachim is also drawing up a proposal for a smart city grid that would wirelessly connect vehicles to robotic cones directing traffic, street lights and stoplights to maximize safety and efficiency.

The meat typically consumed in the developed world — cows, pigs and chicken — requires vast amounts of water, food, land, fertilizers and hormones. These animals also produce methane, a greenhouse gas. However, much of the world regularly gets protein from insects, which require a fraction of the resources animals do and are relatively high in protein and much lower in calories and fat. For example, 100 grams of cricket contains 121 calories, 12.9 grams of protein and 5.5 grams of fat, while 100 grams of ground beef contains 288.2 calories, 23.5 grams of protein and 21.2 grams of fat. Joachim is exploring ways to introduce insects for mass consumption in Western urban diets. He has come up with a Cricket Shelter, a shed-like structure that doubles as storage and as a modular insect farm. It has ventilation screens, flexible sacks for insects to grow in and permeable feeder ports — and it can be adapted to fit available space. With crickets, Joachim says, we’ll be able to grow protein with less than 2 percent of the land we’d need for the same amount of protein from cows.

Harness the political will

While Joachim believes that all his group’s designs are technologically feasible, he knows there are political and economic limitations curbing many of his proposals. Especially in the US, where the existence of climate change is still debated and where corporate interests can overwhelm ecological imperatives, it’s been difficult to move bold architectural ideas into the mainstream. “You can have some incredible science and incredible technology, but the political will needs to be in place for changes to happen,” Joachim says. What will it take to tip the scales? He worries it might require an environmental disaster of even greater magnitude than Hurricane Sandy or Katrina to provoke real action. “If there was a crisis, overnight Congress would agree and Democrats and Republicans would be shaking hands,” he says, “and within two years, we could move to Civilization 2.0.”

Even fantastical visions can eventually become reality. Joachim isn’t worried that his proposals might seem farfetched. In fact, he reminds us that science fiction often sparks ideas that lead to real-world breakthroughs. “If we didn’t have Star Trek, we wouldn’t have smartphones,” he says. Two of his current projects: developing aeroponic chambers for woody plants to grow taproots that can be pleached into structures; and experimenting with using caddisflies (insects that build cocoons out of elements taken from their surroundings) as a kind of 3D printer. Joachim also recently published a book, XXL-XS: New Directions on Ecological Design, which surveys the latest advancements in ecological design, geo-engineering, synthetic biology, self-assembly and beyond. Ultimately, he hopes his work inspires people to reconsider what’s possible for the future of human habitats. “The greatest architects and designers that interest me are the ones that had works that couldn’t be built in their times, yet are in every history book of architecture,” he says. 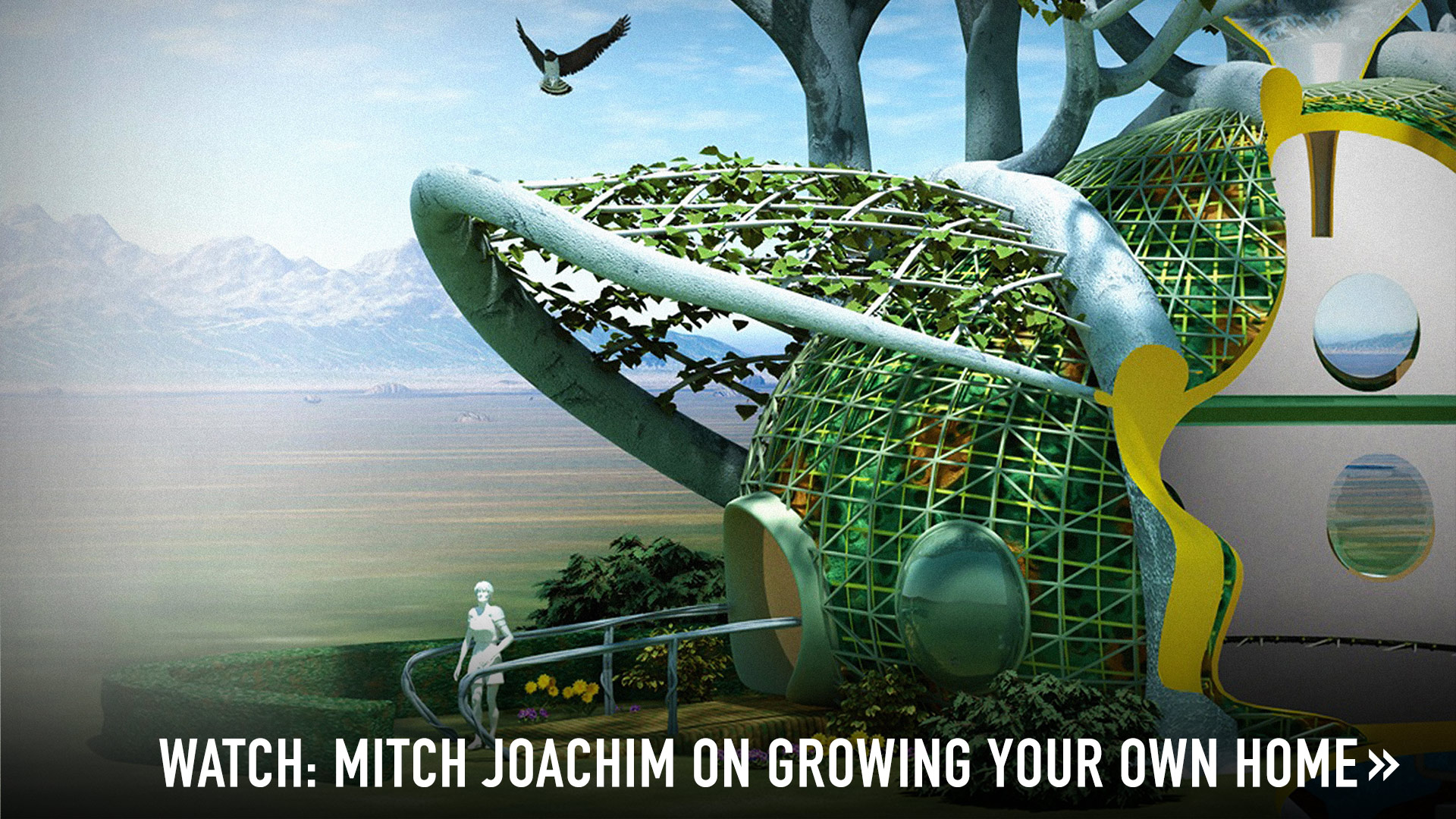 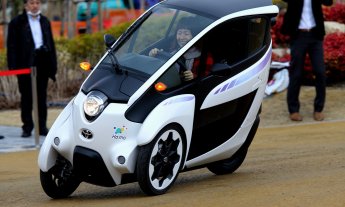 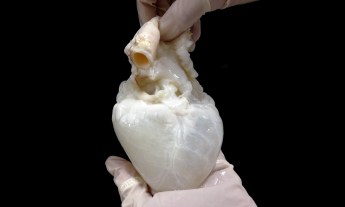