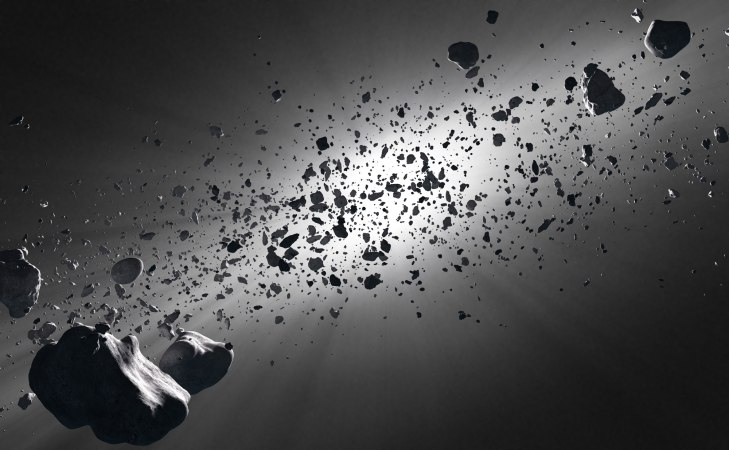 NASA has a plan to combat rogue interstellar objects — and even a Planetary Defense Officer. Asteroid hunter, space scientist and writer Carrie Nugent reveals the array of tactics, from the tested to the far-out.

On the whole, asteroids tend to leave Earth alone. And day to day, there really isn’t cause for most people to give them any thought. But despite being remote objects that most people have never seen, asteroids, and the threat they pose, come up an awful lot in popular culture. They are plot drivers in movies and TV shows. I recently asked Lindley Johnson what his favorite depiction of an asteroid impact was in popular culture. “The movie Meteor. It came out in the late seventies, and it starred Sean Connery, who played me.”

Yes, Lindley Johnson has a job that sparks the imagination of Hollywood scriptwriters. He is NASA’s Planetary Defense Officer — he manages almost everything the US government does related to near-Earth objects. (“Objects” here refers to asteroids and comets.) He directs funding to the surveys, the computational centers that calculate orbits, and scientific research into these objects. If asteroid hunting in the USA were a business, he’d be the CEO.

As Planetary Defense Officer, he heads NASA’s Planetary Defense Coordination Office. He explained, “The word coordination is important. We’re not doing everything. Our office helps to coordinate all the effort by US government agencies and a lot of international work that’s going on toward detecting the threat, and figuring out what we would do if there was an asteroid on an impact trajectory.” He leads a team of experts who work with the UN Committee on the Peaceful Uses of Outer Space and plays a major role supporting the International Asteroid Warning Network, which coordinates observatories across the world.

Obviously, this position comes with tremendous pressure. When I asked Johnson about this, he responded: “I think it is a big responsibility; however, not one that I find particularly high-stress. I don’t know but part of it is probably my Air Force training and experience. I’ve been in a lot of higher-stress jobs where things required more immediate reactions.”

That’s the key to the whole issue of asteroids hitting Earth: time. If we can find something with enough early warning, we have the technological prowess to deflect it. By searching the sky now, me and other asteroid hunters hope to give us the early warning — ideally decades — that we need. But that strategy of focused searching hasn’t stopped people from thinking about what we might do if an asteroid was on its way toward us.

The consensus of the community, says Johnson, is that technology provides three viable deflection techniques. “One is a tried-and-true method; hit it hard to move it in a different direction, the so-called kinetic-impactor technique,” he said. “A sufficiently sized impactor, of sufficient velocity in the right direction, hits the asteroid hard enough to change its velocity by a few millimeters to centimeters per second, far enough ahead of the predicted impact. This changes the time when it would arrive, making it a miss instead of a hit.”

NASA has hit a comet with an impactor, during the Deep Impact mission. The goal of that mission was to study the surface by making a crater and stirring up the surface material so it could be studied. To do that, the spacecraft hit the comet with something heavy: a 372-kilogram probe traveling at 37,000 kph. That’s faster than a bullet. The mission’s goal wasn’t to change the comet’s orbit, but the orbit did change, very slightly. The impact altered the comet’s velocity by about 0.00005 mm/s. To put that in perspective, at a speed of 0.00005 mm/s, it would take you 72 hours to traverse the surface of an M&M candy.

The Deep Impact comet was about as big as a ball of
300 billion really big pumpkins.

To understand why such a massive probe, traveling faster than a bullet, caused such a small change in the comet’s speed, I like to think of things in terms of really big pumpkins. The impacting probe, weighing in at 372 kilograms, is about as big as one really big pumpkin (though, fun fact, record-setting pumpkins can top 900 kilograms). The comet is about as big as a ball of 300 billion really big pumpkins, and even though the giant-pumpkin impactor was traveling faster than a bullet when it smashed into the 300-billion-pumpkin comet, the comet remained mostly intact.

There are other complications to this technique. Some asteroids appear to be very loosely held-together clumps of dust, boulders, and small rocks. Gravity holds them together but it’s almost impossibly weak; roughly 1/100,000 of what it is on Earth (assuming an object about 1 kilometer across). Get one of these asteroids, called “rubble piles,” and the energy of a kinetic impactor might be absorbed by the interior, like a bowling ball being dropped on a beanbag.

But there are other options, as Johnson explains: “Another technique that is talked about is the gravity tractor, where the minute mutual gravitational attraction between an asteroid and a spacecraft has a very small effect. The spacecraft is positioned to maneuver in a determined direction, to slowly tug the asteroid off its natural trajectory and onto a trajectory where it would be a miss instead of a hit.”

This is an elegant technique; it is gradual and exquisitely controllable. As the small gravitational tug of the spacecraft reshapes the asteroid’s orbit, engineers and scientists could carefully make adjustments. Even better, you never need to actually touch the asteroid. A fast-spinning asteroid could be moved in this manner. Even a rubble-pile asteroid could be towed while remaining completely intact.

The disadvantage, though, is that the gravitational pull of a spacecraft is very, very small. Even if we built a spacecraft bigger than any we have ever made, this method would take time to implement, especially if the asteroid itself was big. We could try to increase the mass of the spacecraft after it gets to the asteroid by having it grab large, heavy boulders off the asteroid’s surface, in a scheme called the “enhanced gravity tractor.” But that would be technically challenging and may require more time to design and build. Either way, we’d need a lot of warning, ideally decades.

But there’s also a third seriously considered technique. “We call this the nuclear option, and it’s one we really do not want to use. But if time is short, and particularly if the object is a larger size, the only source of energy mankind knows of that is sufficient to shove an asteroid off an impact trajectory would be detonation of a nuclear device,” says Johnson. “It wouldn’t be designed to blow it up into little pieces, as Hollywood movies show, but would instead irradiate an area of the surface, heating it up instantly and causing it to blow off, thereby imparting a force at the right time and in the right direction, again turning a hit into a miss.”

One inventive idea: you could paint one side of an asteroid black and the other white.

In other words, the bomb is detonated next to — not on — the asteroid. The explosion is designed to give the asteroid a hard shove, not blow it up into a bunch of pieces. But how would the asteroid surface react? If the asteroid was spinning quickly, it might be hard to time the detonation so that the explosion delivered a good shove, and the energy didn’t just go into speeding up or slowing down the asteroid’s spin. A grapefruit-shaped asteroid would react differently from an eggplant-shaped one. And how would a rubble-pile asteroid react? Would it separate into several pieces, only to reaccumulate back together? There’s more unknowns with this technique than we would like.

These are the three methods currently being seriously considered, but the idea of asteroid deflection has inspired other creative approaches. One inventive idea: you could paint one side of an asteroid black and the other white. This would mean the two sides of the object would absorb sunlight differently — the white side would reflect the light, and the black would absorb it, warm up, and release photons a little while later in the form of infrared light. Those departing photons would carry away momentum. In practice, it would be like having a tiny, tiny rocket thruster. But this would likely be far too weak a force and far too slow, to be very practical.

People have also thought of using chemical rocket thrusters to move the object, but they wouldn’t work well if the asteroid was spinning quickly. There’s also been a proposal to use magnetic coils to electrostatically grab loose dust and small rocks from the surface, like hair sticking to a charged balloon. Once the spacecraft collected the dust, it would throw it back at the asteroid at high speed, using the asteroid’s surface material to give it a shove. There’s a bit of poetic justice to this technique that I find appealing.

Overall, it pays to be prepared. The work my fellow scientists and I are doing now — hunting asteroids, learning about them, and thinking of how to move them — is all designed so that we can be as prepared as possible in case a threatening object is found. And although great progress has been made, the work is by no means complete. We have the technology to find all the potentially hazardous asteroids. Now we need to finish the job. 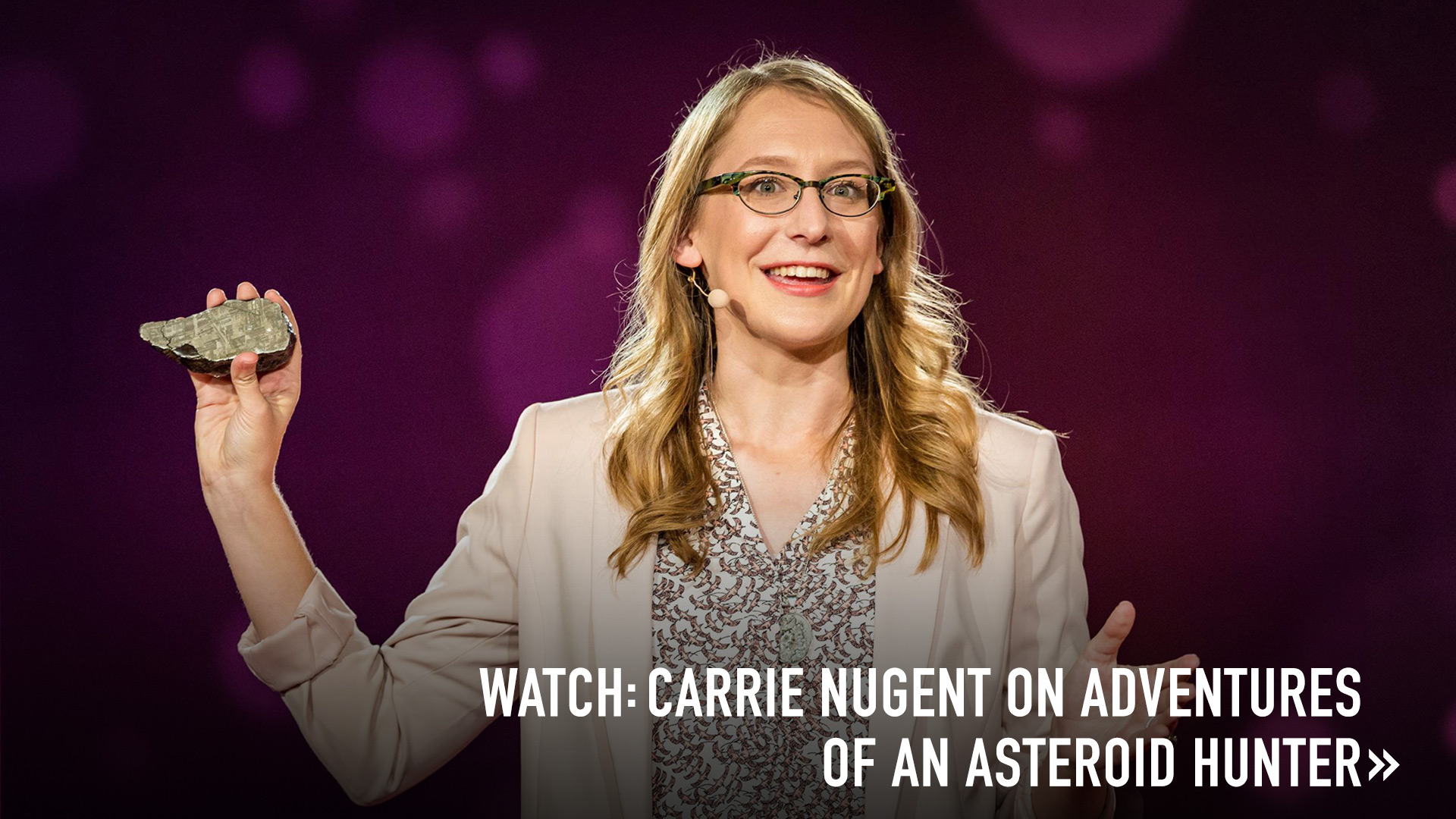 Carrie Nugent is a space scientist who works on NASA's NEOWISE mission, which uses a space-based infrared technique to discover, track and characterize asteroids. Nugent, a TED Fellow, even has an asteroid named after her: 8801 Nugent.