The damaging effects of inequality

“If there is this big difference, with some people worth everything and other people worth nothing, where do you come?” So asks Richard Wilkinson in the trailer for the forthcoming documentary based on his influential book The Spirit Level. Wilkinson, an epidemiologist, spent his career examining health issues caused or worsened by poverty and inequality — a growing awareness that eventually led him to co-found the Equality Trust. The film is the latest step in a quest to encourage politicians and policy makers to address the social damage of inequality.

It’s a campaign that Wilkinson says got a big boost after he turned up in Edinburgh to speak at TEDGlobal 2011. For him, that was just another day, just another presentation as he looked forward to retirement at the close of a long career. And yet a couple of years and some two million views later, the talk has prompted interest and enquiry far beyond his expectations. “The book sold astonishingly well, yet the attention the talk got has far outdone any of that,” he said in a recent telephone conversation.

“The book was my last attempt to try and get the evidence of the damaging effects of inequality onto the public agenda,” he says. “Before, I’d managed to do that only amongst academics in closely related fields to my own field of epidemiology. It hadn’t much got outside that. But via the talk, the message has been seen millions of times. It’s really bizarre for someone like myself, who has worked on his own for much of his career.”

“A number of charities have taken up inequality issues now, because they’re realizing that the things they’re interested in are affected by inequality.”

So the big numbers are all well and good, but how has work at the Equality Trust been coming along in the past few years? More important, has he seen any shift in programs or policies designed to deal with inequality? With typical academic hedging, Wilkinson says he can’t attribute the increased global interest in the topic to his own work. But, he adds, “It is exciting to see the European finance ministers and the G8 meeting begin to tackle tax havens and tax evasion, and there’s been quite a lot of argument about large companies avoiding tax. These things are on the political agenda now.” And while Wilkinson himself has not revisited his data since the book’s release in 2009, he says other academics and research institutions have begun to pick up on the themes of his work.

“There’s a new UNICEF Index of Child Wellbeing [PDF], for which they’ve produced a new set of figures that seem to be similarly related to inequality and not GNP per capita,” he says, referring to the theory central to his work. “And there’s been quite a stream of research papers picking up on issues related to the social damage of inequality. For instance, a number of charities have taken up inequality issues because they’re now realizing that the things they’re interested in are so affected by inequality.”

A quick look at bubbling dissatisfaction in countries from Turkey to Brazil, not to mention a new report published by the Economic Policy Institute showing that in 2012, CEO pay was 202.3 times more than typical worker pay, illustrates that inequality likely isn’t a topic that will be solved any time soon. But Wilkinson believes that the continued groundswell of unrest with the ruling classes and large corporations surging through so many societies could provide the political will for systemic change. “There’s a thirst for new ideas,” he says, optimistically. “People are hungry for new perspectives.”

Meanwhile, he says he remains astounded by the attention his TED Talk has attained. “I think if you get over 100,000 viewers for your talk, TED should give some level of administrative support,” he says, not entirely joking. “Otherwise life is impossible. It’s changed my retirement completely.” Um. Sorry! 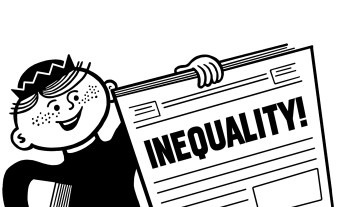