TED’s presented our share of near-misses and might-never-happen tech demos — including, depending on how you count, at least 5 flying cars.

Some big ideas are just too crazy for now, but maybe not too crazy for tomorrow. Under that heading, let’s be charitable and file the flying car. Though to the rational observer the flying car is a kind of bad idea, there’s always the dream that, perhaps when collision-sensing technology works better, and driverless piloting has matured, and we’ve found a lightweight engine that sips renewable fuel (and yet while we still have urban/suburban layouts such that a flying car is even necessary) … perhaps within that sweet spot where technology meets need, the flying car will have its day.

But it probably isn’t today, nor was it any of these other days. Enjoy:

Paul Moller’s Skycar, a small vertical take-off-and-landing (VTOL) plane-like car for two, four or six passengers, has been kicking around for a while. The design is completely delightful, and it’s an on-brand shade of TED red. In demo images Moller showed at TED in 2004, the craft was tethered, not free-flying, and ten years on, that’s about where things stand, as a first-flight demo planned for June 2014 in Sacramento seems not to have come off. But many folks still believe.
Current status: Keep an eye on historicfirstflight.com
Discussed on: investor message boards
TED Talk: “Meet the Skycar“

Anna Mracek Dietrich’s company Terrafugia flipped the flying-car equation — instead of a car you can fly, they’re building a plane you can drive. Meaning that instead of a smooth-flying Lexus of the skies, the Transition vehicle promises the jouncing terror of a single-seat light sport aircraft that you can park in your home garage. Twin challenges face the company: getting the tech right, and getting the FAA to understand.
Current status: The Transition is set for delivery in 2015, and you can reserve one; the next-gen TF-X is a decade away.
Discussed on: Gizmodo
TED Talk: “A plane you can drive“

At TEDGlobal, Yves Rossy showed us what’s basically a flying motorcycle — a rocket engine attached to a flying wing attached to a Swiss airline pilot (Yves) whose body acts as the rudder. Add 55 kilos of kerosene and: Jetman.
Current status: Watch him fly over Mt. Fuji last fall.
Discussed on: the Jetman Dubai YouTube channel
TED Talk: “Fly with the Jetman” Artist Bruce McCall paints the flying car as the ultimate expression of lunatic 1950s self-centered techno-utopiansim, propellors buzzing over quiet asbestos-sided suburban homes. 1000 years from now his art will be seen as a completely true record of our society.
Current status: His latest book is This Land Was Made for You and Me (But Mostly Me).
Discussed on: NewYorker.com
TED Talk: “What is retro-futurism?“

Most of the planet is ocean, so an underwater plane might actually end up being more useful than land-based hybrid deals. Anyway, it’s cooler. Graham Hawkes builds sleek, airplane-styled mini-submarines, the kind that James Bond might explore a downed Soviet fishing vessel with. Since he gave his TED Talk in 2005, personal underwatercraft has moved forward — Hawkes’ next move is to put tourists on his little mini-ships to visit the ocean’s pelagic zone.
Current status: You can reserve the DeepFlight Super Falcon Mark II, and if you get one, take me with you? See byline at top of article.
Discussed on: engineering blogs
TED Talk: “Flying through the ocean“ 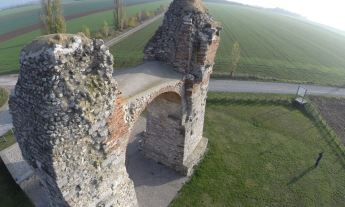 Quadcopters join the circus, in this magical video from Raff D'Andrea and Cirque du Soleil