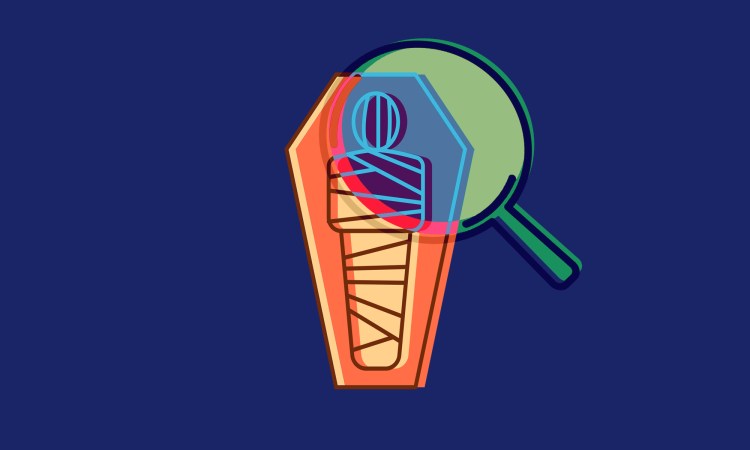 US authorities recovered an illegally looted mummy, and they wanted to return it. Big problem: They didn’t know where it was from. Enter Sarah Parcak, an Egyptologist and expert in the relatively new field of space archaeology. Here, she explains how she and a team unravelled the mystery.

Today there’s a new chapter in the history of collecting antiquities. Thanks to eBay and similar websites, anyone can own a scarab for a few hundred dollars. When I typed in “antiquities,” 55,000 objects appeared on eBay. Clicking on “Egyptian antiquities” narrowed that to 5,000.

On the first page of 50 objects, half of which dealers market as “real,” I’d say maybe two or three seemed like sure bets. Some looked like close copies, as if artisans had created them in the presence of originals but botched details. An expert could spot the fakes, but most people with a credit card wouldn’t have a clue.

I have mixed feelings about this after speaking to the eBay team. I asked if they could remove the antiquities from their website, since any real objects were probably looted goods. They told me, “We can do it, but those guys are the lowest-hanging fruit. You want to find the real bad guys. Go after them first.”

I’m an archaeologist who has worked in 12 countries on four continents, and walking across a heavily looted site breaks my heart. Where the ground is strewn with human remains, mummy wrappings, and recently broken pottery, I know we have lost part of history forever. Each bone, each piece of mummy comes from a living, breathing, laughing, loving human being, no different from you and me. How would you feel if the final resting places of your loved ones were desecrated like this?

Looters also do irreparable damage to modern societies. In many places, groups identify with ancient cultures and even revere them. They’re proud of their associations and celebrate traditions going back thousands of years; site destruction can erase irreplaceable cultural memories.

This hits closer to home for me, too. In the US, looting in the Southwest is connected to the methamphetamine and opioid epidemics. Looters can be highly organized and opportunistic: after the US government shutdown of January 2018, messages appeared on metal-detecting LISTSERVs within hours, essentially saying, “C’mon, boys, no one will be watching. Let’s go loot Civil War sites.”

In the winter of 2014, at the invitation of US Immigration and Customs Enforcement (ICE), Tom Mueller — my partner in uncovering crime — and I received clearance to visit an imposing light-brick building in Brooklyn with faux windows and a single back-entrance loading dock. It is a storage facility for confiscated art collected by the rich and famous of New York. After a once-over from security, we were initiated into the upper floor, where boxes of every imaginable shape and size were stacked floor to ceiling, just like the scene from Raiders of the Lost Ark. (And yes, I scanned for ark-shaped boxes. No luck.)

An agent ushered us to a brightly lit room where antiquities were laid out, recovered during what they called — and I am not making this up — “Operation Mummy’s Curse.” Tom told me afterward he wished someone had taken my picture to capture the look on my face as I walked in: shock, disgust and utter amazement. I couldn’t speak for a moment, as an ancient vision floated before me. Reds, whites, creams, blacks — a palette of perfection was painted on a 2,400-year-old Egyptian sarcophagus unlike any I’d ever seen. The decoration included a beautiful carved face, perhaps a portrait of the deceased (you can see a photo of the mummy in this document).

The agent explained that colleagues of mine had translated the sarcophagus texts, giving it a date between the Late and Ptolemaic Periods and placing it roughly between 712 BC – 30 BC. Thanks to those texts, my vision had a name: Lady Shesep-Amun-Tayes-Herit. ICE knew her sarcophagus had entered the United States illegally but had no idea of her point of origin.

I suggested that I use her as a test case. I’m an Egyptologist and part of a relatively new speciality called “space archaeology.” I analyze satellite data sets to find and map otherwise hidden archaeological sites and features. A team and I had recently studied high-resolution imagery of more than 700,000 square kilometers of Egypt — mostly from Google Earth — from 2002 to 2013.

In six months, we mapped over 200,000 looting pits. They’re easy to detect once you know what to look for: a dark square, about a meter in diameter, surrounded by a donut of earth left by the looters in their search for lucrative tomb shafts. A heavy pall hung in the air as my team and I worked away on the data and witnessed the ongoing erasure of history.

I wanted to see if the satellite database we’d compiled might help find where our lady was taken from. Maybe, just maybe, our imagery documented this specific looting incident, assuming she came from a cemetery and not a rock-cut tomb in the cliffs. Common 2,500 years ago, a cliff burial would have hidden her from satellites, so fingers crossed.

I started narrowing down a database of 279 looted sites, with occupation dates for each based on previous excavation and survey data. Agents brought me radiocarbon dates for the sarcophagus, which confirmed the date range of 664 BC – 30 BC.

First, we had to determine which of the 279 looted sites had cemeteries of the right date. This narrowed down the possibilities considerably, to 33. When I was in the warehouse and looked at the lady’s face, her eyes caught mine. I saw tiny glints in the corners — grains of sand. Thank goodness the looters did a bad job cleaning up the wood. The sand meant a desert origin, and the sarcophagus’s state of preservation also suggested someplace dry.

Second, we narrowed down the sites to a cemetery along the desert edge. We also needed a site near an urban center, as our lady represented the highest form of art created by a da Vinci-quality workshop. In antiquity, we’d expect to find them in a large city.

Only 10 sites matched the criteria. Fortunately, we had the lady’s date of arrival stateside. The pieces were seized between September and November 2009, so the looting probably occurred between 2005 and early 2009. Much of the looting on the satellite imagery took place from 2009 onward, after the global recession. Only 5 sites out of the 10 had looting before 2009, and only one, Abusir el Malik, had thousands of looting pits from 2005 to 2009.

In ancient Egypt, names often ran in families, and Shesep-Amun-Tayes-Herit is not a name you see every day. A coffin with the exact same name and from the same period as our lady — now located in the Tampa Museum of Art in Florida — gave us a crucial link. That sarcophagus, colorful but not as artful, had a provenance of Abusir el Malik. I also found a statue of a scribe from “the Saqqara region,” the same area as Abusir el Malik, on which the name Shesep-Amun-Tayes-Herit appeared, in this case as the scribe’s mother.

With a long history of looting, Abusir el Malik is a cratered moonscape. Human remains lie across the site like leaves beneath a tree in fall. My colleagues who’ve visited come back visibly shaken. It seemed ever more probable that this was our lady’s home.

Shesep-Amun-Tayes-Herit was laid to rest in an elite cemetery there 2,500 years ago, in a time when a city flourished along the banks of the Nile. From the title on her sarcophagus — Chantress of Amun — she worked in a temple, one of the highest positions a female private citizen could hold. She probably lived in a mult-istory house, appointed with considerable luxury, and was beloved by her family.

They worked to ensure she was buried in a sarcophagus made and painted by the city’s elite artisans, and her tomb was filled with statues, shabtis, jewelry and all the finery imaginable. They family paid the priests well to make her offerings, probably for several generations. Her name is now remembered — the looters stole her things and destroyed her body, but ironically, they helped preserve her memory and fulfill her dreams of immortality. That summer, she was repatriated to Egypt, so our research was a worthwhile endeavor.

Finding the likely origin of a single sarcophagus such as this is an important step. Once we have data on looted sites, we can create lists of objects likely looted there, which could help break the chain from looter to market. But understanding the mechanisms behind the whole dark trade is essential.

Currency devaluations, unemployment, a drop in tourist numbers, and price inflation all provoke looting, one of the great hidden problems of the 21st century. Outraged proclamations from governments and organizations such as UNESCO are too easily ignored. The problem requires a global movement. We need to understand what classes of people profit from looting and what life is like for the average looter. It is a desperate crime — locals may sell to criminal elements, but they loot out of a need to support their families. If we can look with empathy at this end of the pipeline, we have a chance of coming up with effective solutions. Of course, the big money is made by end sellers, perhaps via large auction houses or private dealers, though we do not know how much the network marks up pieces along the way.

But the people who really cause that first shovel to be lifted are buyers in the West and Far East. These range from someone bidding on a $100 scarab on eBay to the wealthy paying millions at a high-end auction for a sculpture. If no market existed, looting would simply not be at current levels, and it’s what we must combat first. Just as the demand for endangered animal parts and exotic pets is best tackled through reeducation combined with punitive measures, it is the top-level consumers who must be sought out. Even, and perhaps especially, if that means looking in our own cultural mirror.

Excerpted from the new book Archaeology from Space: How the Future Shapes Our Past by Sarah Parcak. Published by Henry Holt and Company. Copyright © 2019 by Sarah Parcak. All rights reserved.

About Sarah Parcak and GlobalXplorer°

Launched by 2016 TED Prize winner, Sarah Parcak, as her “wish for the world,” the online platform GlobalXplorer° aims to use the power of the crowd to to analyze the wealth of satellite images available to archaeologists and to bring the wonder of discovery to all.

The platform’s first expedition? Peru. Starting in early 2017, more than 70,000 citizen scientists from over 100 countries joined the mission, logged in, and began looking at 14,620,932 individual satellite images over 58,000 square miles. The crowd voted on the sites that appeared to have human-made structures, and 19,084 features of archaeological interest were identified — dating from Caral, the oldest civilization in Peru, circa 3200 BCE, to the fall of the Inca in 1572 CE. The crowd also identified evidence of looting, which will be used by Peruvian authorities. The 19,084 sites were sorted by the GlobalXplorer° team, who selected 342 sites of very high interest which may potentially be important settlements. Of those, 40 were explored further with drones. The team plans to publish its findings.

In the fall of 2019, GlobalXplorer° will launch Expedition India. Go to GlobalXplorer° to find out more about how you can help preserve archaeological history before it’s too late. 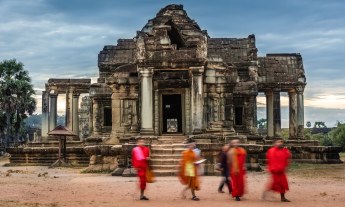