There’s more to the small Skybox satellite than meets the eye. Much, much more 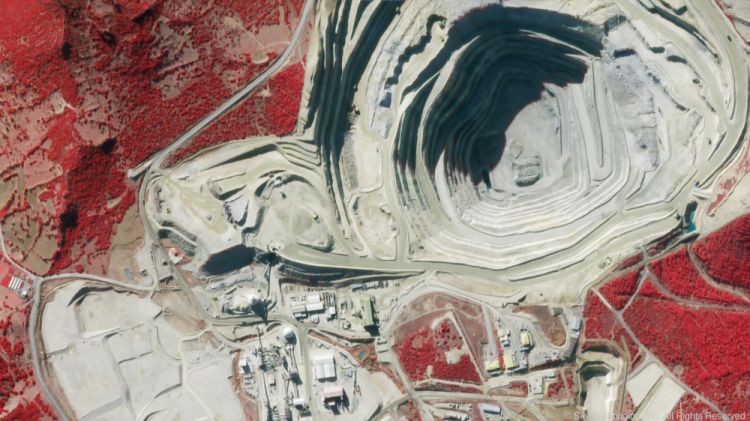 In January 2011, Fred Villagomez, the head mechanical technician at a Mountain View-based satellite imaging startup, drove east, looping down and around the San Francisco Bay toward Fremont. His destination: an auto plant called NUMMI, a failed joint venture between General Motors and Toyota, whose assets were about to be auctioned off. Villagomez spent two days walking around the plant, making bids on milling machines, lathes, hand tools. “We got almost all of the equipment we needed to build a lean satellite manufacturing facility — at fire-sale prices,” recalls Skybox Imaging co-founder and chief product officer Dan Berkenstock. If buying up an auto assembly line to build satellites sounds unorthodox, that’s because it is. But unorthodox is typical at Skybox.

In the world of innovation, borrowing ideas or re-using a technology invented for a different purpose is as old as the sun. There’s the escalator, conceived as a Coney Island amusement ride. Reinforced concrete, invented by a Parisian gardener who wanted stronger flowerpots. Bill Gates borrowed the structure of BASIC, Steve Jobs borrowed the desktop metaphor. But few companies have borrowed as creatively as Skybox, which is combining technologies from a half-dozen consumer products to upend the insular business of satellite imagery.

Skybox was conceived in 2008, when Berkenstock, trained as an aerospace engineer, was working as a data scientist — trying to catch potential smugglers of nuclear technologies. Looking for accurate information about industrial facilities on the other side of the globe, he studied satellite images, only to find that those available to him were months or even years old.

Roughly 1,000 satellites ride Earth’s orbit. Less than one percent of those gather high-resolution images for the commercial market, and many government agencies can essentially commandeer a satellite’s time. In other words, there just aren’t enough imaging satellites to capture the Earth in a timely way. Berkenstock found that while a satellite passes over some places on the globe almost quarterly, most of the planet is photographed but once a year. Why weren’t more satellites collecting high-resolution images? Because building and launching a satellite the traditional way costs more than $1 billion.

Berkenstock and his three Skybox co-founders set out to build a radically cheaper imaging satellite. They took inspiration from the CubeSat, a DIY satellite conceived in 1999 by some aerospace engineering professors at Stanford. The CubeSat could be built with components from RadioShack and piggyback its way into space on a rocket already taking other payloads, for a total cost of around $60,000. Since then, many research teams have launched these mini-satellites into space.

The Skybox team aimed to find the sweet spot between CubeSats, which were too small and crude to collect valuable images, and the prohibitively expensive NASA-grade imaging satellites. So they borrowed the DIY approach but upgraded from RadioShack, finding high-grade components and clever workarounds wherever they could. “Across power, navigation, and communications, we found ways to modify things you could buy at Home Depot or a sporting goods store so that they would work in space,” Berkenstock says.

Consider the essential task of an imaging satellite: taking pictures. “Traditional satellites work like a line scanner, capturing images row by row,” says Berkenstock. Complex onboard systems then assemble those thousands of rows into images and send them back to Earth. In contrast, the Skybox satellite uses a two-dimensional video sensor created for night-vision goggles and some electronics borrowed from high-end digital cameras to capture video. Skybox software, adapted from MRI and ultrasound machines, reads the data from the sensors and compresses it in real-time before it is sent Earthward using essentially the same technologies as DirecTV.

The video data is parsed and reassembled into useful high-resolution images on the ground, allowing Skybox to build much simpler (and therefore smaller and cheaper) satellites.

But arguably, it’s what Skybox does next with the images that sets them apart: It overlays those high-enough-resolution images onto other types of data to allow for quick analysis and comparison. It fell to the company’s big-data team — made up mostly of former Yahoo! engineers, using open-source database software developed by Google — to build the tool that parses images in this way. By starting with software developed for web searching, rather than data-crunching software traditionally used in aerospace, the Skybox engineers developed a platform that can extract information from an image — say, the number of cars in a parking lot or the number of rows in a cornfield — and crunch it along with data from an entirely different source — say, historic government records.

The company has taken more from the auto industry than NUMMI’s idled assembly line. Modern cars use a standard networking technology, a system of wires and software protocols that allows all of the sensors and mini-computers in a modern car to communicate efficiently. (For instance, when a minivan driver activates the power sliding doors, the relevant mini-computer first ensures that the car isn’t moving; then sends an OK to the power circuit that runs the door’s motor and monitors the circuit for voltage spikes, which happen if an object blocks the door’s path; and so on. See a more detailed account of how this works in this Popular Mechanics piece.)

Like a modern car, a satellite has numerous subsystems that need to be able to communicate efficiently. One Skybox engineer had already adapted the Detroit-standard technology once, as part of a team competing in DARPA’s Grand Challenge, the Defense Department-sponsored competition to develop self-driving cars. This time, he adapted the system to help the myriad technologies inside its satellite work together — from those managing power and gathering images to those controlling altitude and wireless communications.

The first Skybox satellite is now in orbit and streaming images back to Earth. The second will launch sometime this year, with the long-term goal of having 24 satellites in orbit by 2017.

Of course, Skybox hasn’t built its celestial network yet, and at least two other startups are also rushing to build a business around satellite imagery. One, Urthecast, has the rights to images collected by a powerful telescope attached to the International Space Station. The other, Planet Labs, plans to launch a network of ultra-low-cost (though also less powerful) “doves,” akin to CubeSats. (Planet Labs co-founder Will Marshall will speak at TED2014 in March.)

Yet when Berkenstock says, “we don’t see ourselves as having competitors,” it’s almost believable, because no company now in the commercial satellite-imaging market does the kind of analysis it hopes to offer, comparing high-resolution satellite images to other relevant data. It’s the kind of real-time information that would be useful to companies in trucking, shipping or logistics; someone interested in projected crop yields and corn futures; organizations or governments tracking environmental disasters and more.  Ultimately, the most significant Skybox adaptation might not be that it is using consumer technologies to rethink satellite imaging, but that it will use satellite imaging to make the world’s data more transparent. “We see ourselves a pioneers of a new frontier,” says Berkenstock. “Beyond economic data, we are unlocking the human story, moment by moment.”

Jessie Scanlon is a writer and editor covering technology, design, and innovation. “Questions Worth Asking” is a TED editorial series; this week we asked the question, “Can I borrow that?” to dig into themes of cross-disciplinary innovation and idea-sharing. See also Seth Godin’s op ed, “Why I want you to steal my ideas,” a story about SkyBox Imaging, a company using unexpected technology to build a new type of satellite, and an interview with Suzanne Lee, who’s mixing science, fashion and kombucha to extraordinary effect.