Why do protest camps have libraries? 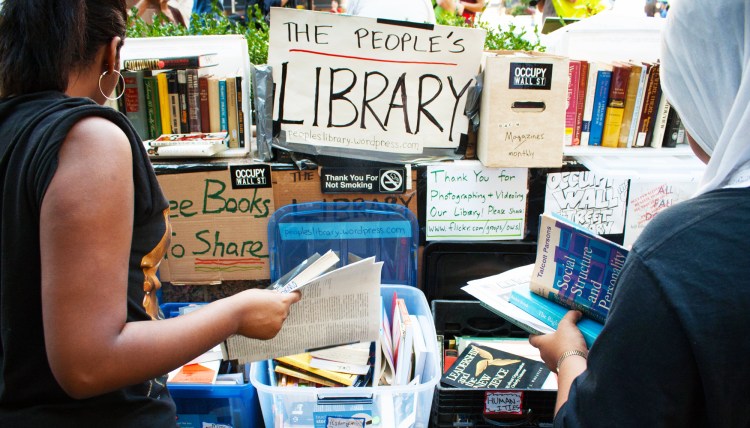 From Hong Kong to Istanbul to New York, libraries are one of the defining elements of 21st-century demonstrations, says techno-sociologist Zeynep Tufekci, and they can help illuminate why people risk discomfort, arrest and danger to stand together.

A pious Egyptian woman arrived in New York at the height of the Occupy Wall Street protests of 2011, and she was drawn to join the demonstrators in Zuccotti Park. While a hijab-wearing religious woman from the Middle East might not have seemed part of the natural constituency of the dreadlock-sporting anarchists of Zuccotti Park, this Egyptian felt differently. She announced herself to the crowd — “I’m from Tahrir, and I support you guys!” — and not only was she welcomed, she was recognized as a prominent Twitter voice from the Egyptian uprising earlier in the year. She’s just one example of how global anti-authoritarian protest culture is cutting across political ideology in nontraditional ways.

Each country has specific influences, and each movement has specific features and grievances. Yet there are commonalities across the world’s movements. Thanks to digital media and easier travel, protesters in dif­ferent locations can interact and form more direct interpersonal connections than ever before — in fact, the shared protest culture and politics of 21st-century networked protests have a basis rooted in friendship and solidarity that has been built over decades. (I use “networked” as a shorthand for digitally networked.)

There are few formal organizations in this new landscape. But these networked movements tend to share key traits: a leaderless nature, a participatory impulse, a sudden rise and fall, an emphasis on expressive politics, a role of digital connectivity and a political culture.

Of course, the act of protesting takes time and energy and it can be dangerous, depending on the country, with risks ranging from arrest to tear-gas exposure and, sometimes, death. When protesters do achieve their goals, the resulting benefits can be enjoyed even by those who did not participate. Given the dangers and the fact that the payoffs go to all, many scholars have asked, Why do people protest? Why don’t more people “free ride” and let others shoulder the burdens of protest? To understand this, we can consider a simpler question that has long puzzled me: Why do so many protest camps set up libraries?

Protests are locations of self-expression, communities of belonging and mutual altruism.

The Occupy protest in New York’s Zuccotti Park erected a library, as did many other Occupy encampments around the world. Hong Kong’s democracy protesters and the Plaza del Sol protests in Madrid, the biggest protests of the Indignados movement that swept much of southern Europe, had libraries as well. They seem to be one of the most typical fixtures of networked protests. Although they do not seem like a necessity, they are among the first structures constructed by protesters and they’re stocked and defended with enthusiasm. Many protest camps also include soup kitchens, clinics, clothing exchanges and other hubs that are usually explained by demonstrators as necessities (though generally speaking, protest camps gather far too much donated food and most people attending protests do not really need extra clothes).

Clearly, these libraries and donations reflect something about the spirit that moves people to protest in the first place. The sense of rebellion that is felt at a protest and the work that people perform in protests are inseparable. Protests cannot be described as a single entity; they have a multitude of components, some in tension with others. Protesters want the world to change and may be demanding a set of policies or attention to their issues. But protests are also locations of self-expression, communities of belonging and mutual altruism.

Protests have always had a strong expressive side, appealing to people’s sense of agency. The English poet William Wordsworth, writing about the French Revolution, said, “Bliss was it in that dawn to be alive,” a sentiment that would be at home in 21st-century Istanbul, Madrid, Hong Kong, New York or Cairo during a demonstration, or in many other occupied squares and parks around the world. For many, taking part in a protest is a joyful activity and often provides a powerful existential jolt, especially if there is an element of danger and threat to the safety and the well-being of the protesters. The French sociologist Émile Durkheim wrote of “collective effervescence,” the emergence of a sense of being swept through one’s actions by a larger power when one is “within a crowd moved by a common passion.” That transcendent feeling of being part of something larger than oneself applies to protests, however secular their aims may be.

In setting up the library, protesters express a desire for people over profits or money.

This relationship between belonging and individual expression is a key component of protest participation. One reason that people demonstrate instead of free ride is because the expressive side of protest is a significant part of the reward that they seek. Even though the success of many protests is judged on whether they achieved their expressed aims, protests can be ends as well as means. People wish to belong, especially to communities that make them feel good while offering Durkheim’s collective effervescence. This also occurs online and offline when people join viral conversations to add their voice to the collective, even though theirs is just one more voice, and when they join protests, even though they are just one more person.

The environments that demonstrators deliberately fashion are a major part of what makes participation worthwhile. Seen through this lens, setting up libraries amid the tear gas makes perfect sense. Libraries express a set of values that are aligned with the deeply held values of the protesters. At Gezi Park in Turkey in 2013, the library was in the middle of the park, staffed by a man in a clown suit and a rainbow-colored wig. He waved merrily at passersby and handed out books. Protesters told me the library had been relocated because the first one, a smaller space at the front of the park, had been knocked down during a police incursion. The second library was constructed from cinder blocks and was stocked with hundreds of books.

Occupy Wall Street had a library containing more than 5,000 volumes, including books, magazines and newspapers. The police destroyed it during the eviction of the group’s occupation, and the city was later ordered to pay hundreds of thousands of dollars in restitution. From Toronto to Oakland to Hong Kong to Tahrir, libraries were among the first spaces protesters provisioned in occupied encampments, exactly because they encapsulated the spirit of the protest: that people can and should interact with one another and exchange ideas in a relationship not mediated by money. In setting up the library, protesters express a desire for people over profits or money, a slogan that comes up in many demonstrations. Unlike other items that one can buy, like food or clothes or cigarettes, but which are often distributed for free in camps, books embody intellectual values and symbolize knowledge and, occasionally, rebellion.

Many people are drawn to protests due to the alienation they feel in their ordinary lives.

Karl Marx coined the phrase “commodity fetishism” to describe the tendency of market exchanges to blur and bury the economic relations embedded in the social relations underpinning them. Today, a cell phone, for example, may be manufactured in China in a factory with few labor protections, transported via containers in trans-Pacific ships to rich nations in accordance with complex, often opaque trade accords, contain software written in San Francisco by companies with offshore headquarters, and be marketed with an ad campaign that includes undisclosed product placement. At each step in the chain of supply, distribution and marketing, there are laws, history, trade agreements and treatment of humans within a variety of social contracts.

Many people are drawn to protests due to the alienation they feel in their ordinary lives as consumers. Exchanging products without money is like reverse commodity fetishism. In protest camps, the conspicuous lack of money is less about a lack of resources than about taking a stance regarding the worth of human beings outside monetary considerations. Under ordinary capitalism, people exchange gifts and items to signify their feelings but they do so in discrete circles (family, friends, lovers) embedded in reciprocal relationships. In protest camps, unencumbered and often anonymous giving to one another and to the community is an exchange that is explicitly not reciprocal.

In Gezi, I was offered food or cigarettes at every turn. All day, there was “gifting” when someone might come up with a tray of pastry and pass it around. Gezi was also repeatedly cleaned. People attributed it to Turkish customs — many Turks do clean their houses obsessively — but in Egypt, Tahrir protesters frequently cleaned the square, even setting up recycling stations (interestingly, neither street cleaning nor formal recycling is common in that country). Wisconsin protesters who occupied the state capital in 2011 to protest an anti-union bill also cleaned their camp, as did Hong Kong protesters, who garnered press coverage about their cleanliness. So did the #electricyerevan protesters in Yerevan, Armenia, in 2015, and Ferguson protesters in St. Louis, Missouri, in 2014.

There is a practical side to this cleaning, since authorities often claim that protest camps are filthy and need to be closed because of unsanitary conditions. But beyond that, the incessant cleaning is a statement about the sacredness of the space, and the housekeeping stems from activists’ desire to protect their “home” and their space of rebellion.

This affirmation of belonging outside of monetary relationships and of the intimacy of caring for people is at the core of what motivates many to participate. A protest is, if nothing else, a community. Challenges to traditional communities have come from many converging factors: extended families have shrunk to nuclear ones living in the suburbs, parents work long hours, and local institutions like union halls that facilitated interactions between people outside of family and work have disappeared. Some kinds of community might be in decline, but the search for community and belonging is on the rise.

Excerpted with permission from the book Twitter and Tear Gas: The Power and Fragility of Networked Protest by Zeynep Tufekci, published by Yale University Press. Copyright © 2017 Zeynep Tufekci. 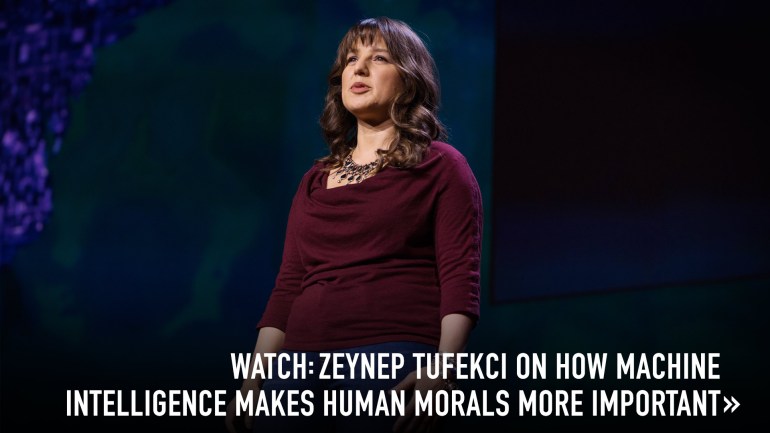 Zeynep Tufekci studies the effects of technology on politics and society. She is an associate professor at the School of Information and Library Science at University of North Carolina, Chapel Hill, a faculty associate at Harvard's Berkman Klein Center for Internet and Society, and a contributing opinion writer at the New York Times. 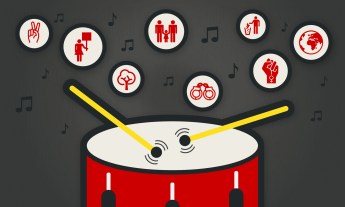