A flat piece of plastic that can shape itself into a shoe? An orthodontic device that moves into position to straighten teeth? Computational architect Skylar Tibbits is shaking up the material world.

Ever tried to assemble an Ikea table? Turning a two-dimensional pile of wood and plastic into a useful 3D object can be a challenge. Now imagine opening the box and watching the table assemble itself. At MIT’s International Design Center, Self-Assembly Lab founder Skylar Tibbits, co-director Jared Laucks and their team are inventing smart materials that can automatically take shape in useful — and sometimes surprising — ways.

Today, designers in most industries are searching for smart materials — materials that respond and adapt to environments — to make unique new products, but finding ones that are cost-effective and easy to produce has been challenging. Until now, they’ve usually incorporated robotics or other devices to make them reactive, but that technology presents obstacles and limitations. “Robotic mechanisms can be expensive, failure-prone, hard to assemble and require power,” says Tibbits, a TED Senior Fellow and an assistant professor of design research in the department of architecture at MIT. “Plus, car and plane manufacturers don’t want to add heavy robotic mechanisms to their vehicles, and you don’t really want robots incorporated into things like shoes or clothes.”

Tibbits has pioneered the field of 4D printing — that is, using 3D printers to create material that then transforms into a predetermined shape (TED Talk: The emergence of 4D printing). Now he’s shaking up the material world again by tackling a broader category, what he calls programmable materials, or “materials that can change shape according to instructions that are essentially programmed into them,” he explains. “We are finding ways to program every material — both ones we already use, like wood, leather and carbon fiber, and also newly invented materials.”

But how do you program something like wood? And what kinds of things can we dream up with these new materials? We asked Tibbits to walk us through some of his lab’s innovations.

To unlock a material’s programmable potential, consider its natural characteristics. In order to get precise and predictable transformations from a material, it’s necessary to structure it in a particular way and then activate it with energy. “Every material has some property that allows it to respond to an energy source, which points to how you can activate the transformation,” says Tibbits. Energy sources include temperature, moisture, light, pressure, vibration and electricity.

Take wood, which reacts well to water. “Cellulose expands when it gets wet, so wetting wood veneer makes it curl,” says Tibbits. “For example, wetting thicker pieces of wood makes them swell with enough force that they used to be inserted into cracks in rocks and moistened to help miners break stone.”

Then, there’s the structure of the material — with wood, this means the direction of the grain — which helps dictate how it transforms. “We’ve figured out how to print custom wood grain by taking sawdust and plastic, combining it into a filament and extruding or forcing it out,” says Tibbits. “This gives us the freedom to design the direction of the grain, which we can then activate by moisture to produce useful, repeatable transformations, like folding, twisting, curling and so on.”

Textiles can be programmed, too. “You can pre-stretch a textile and print, bond or spray an additional material in a pattern to add a constraint, which gives a form when the textile is released,” Tibbits says. “It jumps into shape, sort of like a jack-in-the-box, and can result in three-dimensional structures that have all sorts of weird complexity to them.”

For example, to create the Programmable Table — a prototype, flat-pack coffee table that pops into shape after it’s unboxed — a stretch textile was bonded to a wooden frame. Collaborating with product designer Christophe Guberan, the Lab has been working on a self-assembling shoe that goes from a flat sheet into a fully shaped shoe, an innovation that might someday transform the manufacturing process for footwear. Right now, says Tibbits, “shoes are made out of tens or hundreds of components that are, more or less, manually put together. They’re glued, stitched and stretched, and it all takes a lot of labor. We wanted to find a way to take a single material that could pop into an entire shoe on its own.”

Applied to high-tech carbon fiber, programmable materials have taken off. “Carbon fiber is a super-light, super-strong, woven material that is made from carbon, says Tibbits. “It’s found in race cars, high-performance bikes and planes, but it tends to be rigid and static when you work with it.” Carbitex, a company that specializes in carbon-fiber composites, approached the Lab with their fully-flexible carbon fiber, and together they came up with a self-transforming version. “We found a number of different ways to control the structure of the carbon fiber. We printed, bonded or sprayed temperature-sensitive polymers onto and within carbon-fiber sheets in very specific patterns, programming it to fold or twist in precise ways,” says Tibbits.

So far, applications for the material have included the Morphing Jet Engine Inlet, a component created with Airbus that opens and closes to control the flow of air to the engine in response to changes in temperature or wind-speed pressure. The lab also devised a special wing for a street-legal race car: “Based on moisture that it detects in the air, the rear wing opens and closes, which helps create drag on rainy days,” says Tibbits. “While this does reduce the efficiency of the car, it puts more pressure on the rear tires so you get traction.”

The Lab is also experimenting with heat-active auxetics, materials characterized by their unusual ability to expand in all directions when pulled or to shrink when compressed. “Typically, when you stretch a material, it shrinks in the other direction, becoming thinner in the axis perpendicular to the direction of the pulling force, like a rubber band,” says Tibbits, author of the new book Self-Assembly Lab: Experiments in Programming Matter. “Auxetic materials do the opposite because of their unique geometry and material properties.” His lab’s in-progress auxetic structures, which expand or contract when triggered by temperature, could someday be used to create expandable packaging or cushioning, smart window shading systems and breathable clothing.

They’re stepping into the health-care space, and their first target is … your teeth. Orthodontics devices have traditionally been produced by hand, requiring considerable time, labor and expense. With Anenke, a French orthodontics company, they are patient-testing a new process that uses digital scanning to create a dental device which is printed with safe polymers. The result: a perfect fit, without messy molds or endless fittings. Their next step, Tibbits says, is to program these devices to self-transform, so they can autonomously move a person’s teeth into the desired position.

But reinventing materials is not enough — the Self-Assembly lab wants to re-engineer the relationship between industry and academia. Even though the lab is part of MIT, it is entirely industry-funded. “Industry funding means we get to have an exploratory and open-ended attitude that allows for fundamentally new discoveries, but with the possibility of applying our ideas very quickly and with feedback on the practicality of our research,” says Tibbits. “Meanwhile, industry gets to peer into the future of our world as imagined by the best minds of our generation. It’s a really interesting sweet spot to be working in — mixing the radical and the relevant.” 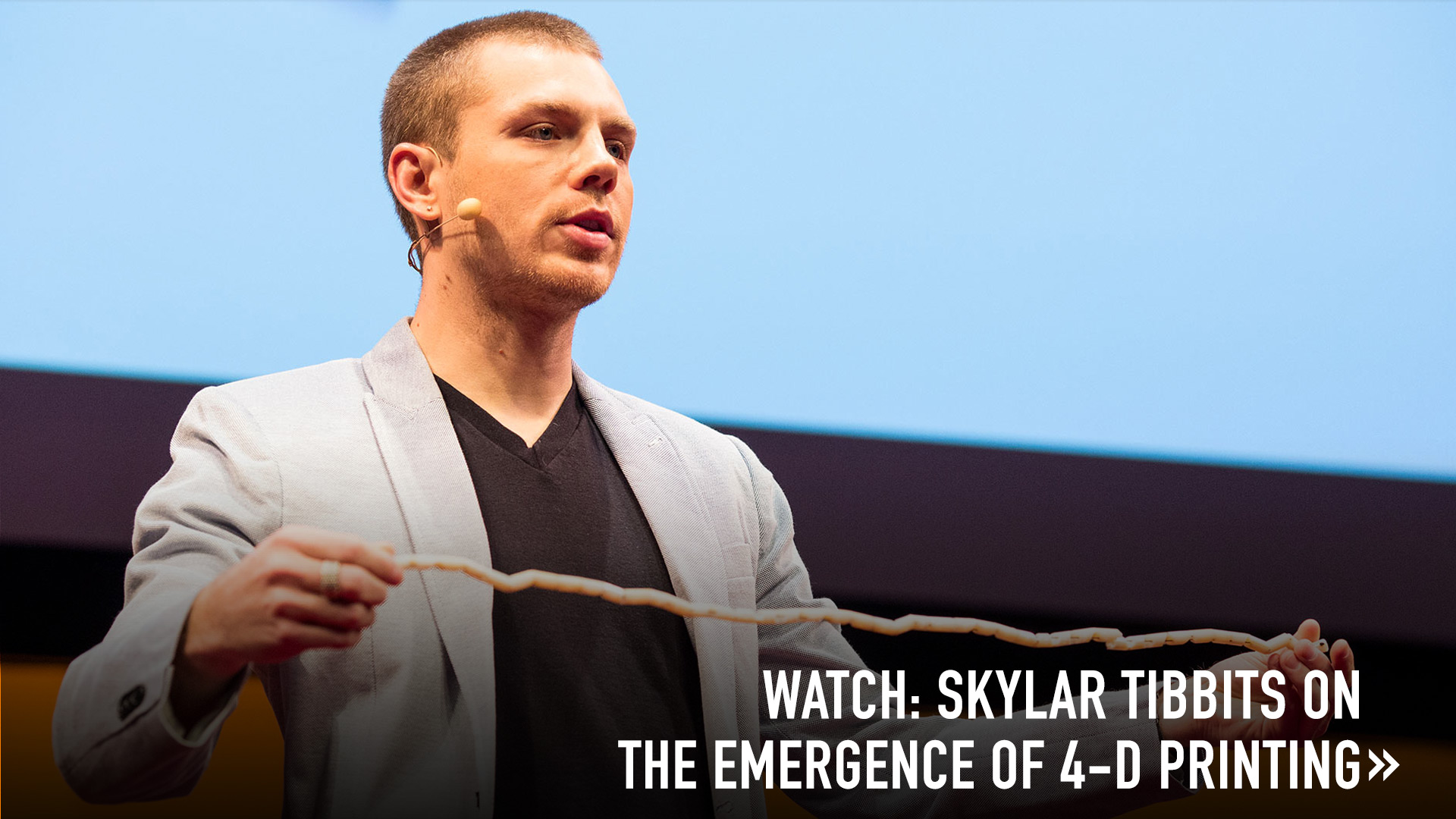 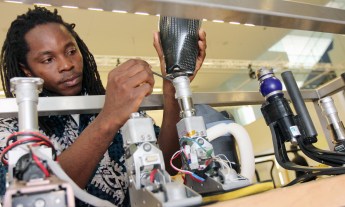 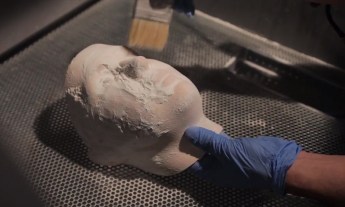 Video: A DNA portrait from a single hair 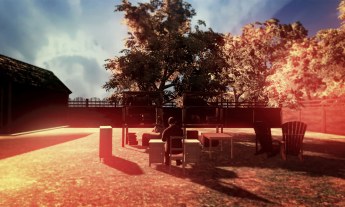