Here’s one example of a machine-generated joke: “Why did the chicken cross the road? To see the punchline.” Learn about the work that scientists are doing to make AI more LOL.

When it comes to predicting advances in AI, the popular imagination tends to fixate on the most dystopian scenarios: as in, If our machines get so smart, someday they’ll rise up against humanity and take over the world.

But what if all our machines wanted to do was crack some jokes? That is the dream of computational humorists — machine learning researchers dedicated to creating funny computers. One such enthusiast is Vinith Misra (TED@IBM Talk: Machines need an algorithm for humor: Here’s what it looks like), a data scientist at Netflix (and consultant to HBO’s Silicon Valley) who wants to see a bit more whimsy in technology.

While there’s intrinsic value in cracking the code for humor, this research also holds practical importance. As machines occupy larger and larger chunks of our lives, Misra sees a need to imbue circuitry with personality. We’ve all experienced the frustration caused by a dropped phone call or a crashed program. Your computer isn’t a sympathetic audience during these trials and tribulations; at times like these, levity can go a long way in improving our relationship with technology.

So, how do you program a computer for laughs? “Humor is one of the most non-computational things,” Misra says. In other words, there’s no formula for funny-ness. While you can learn how to bake a cake or build a chair from a set of instructions, there’s no recipe for crafting a great joke. But if we want to imbue our machines with wit, we need to find some kind of a recipe; after all, computers are unflinching rule-followers. This is the great quagmire of computational humor.

To do this, you have to pick apart what makes a particular joke funny. Then you need to turn your ideas into rules and codify them into algorithms. However, humor is kind of like pornography … you know it when you see it. A joke told by British comedian Lee Dawson exemplifies the difficulties of deconstructing jokes, according to Misra. It goes: “My mother-in-law fell down a wishing well the other day. I was surprised — I had no idea that they worked!” It’s not so easy to pick out why this joke works (and some mothers-in-law would argue it does not work at all). For starters, there’s a certain amount of societal context that goes with understanding why a mother-in-law going down a well is funny. Does this mean that creating a joke-telling computer would require the uploading and analyzing of an entire culture’s worth of knowledge and experience?

Some researchers have been experimenting with a different approach. Abhinav Moudgil, a graduate student at the International Institute for Information Technology in Hyderabad, India, works primarily in the field of computer vision but explores his interest in computational humor in his spare time. Moudgil has been working with a recurrent neural network, a popular type of statistical model. The distinction between neural networks and older, rule-based models could be compared to the difference between showing and telling. With rule-based algorithms, most of the legwork is done by the coders; they put in a great deal of labor and energy up-front, writing specific directions for the program that tells it what to do. The system is highly constrained, and it produces a set of similarly structured jokes. The results are decent but closer to what kids — not adults — might find hilarious.

“What is the difference between a mute glove and a silent cat? One is a cute mitten and the other is a mute kitten.”

“What do you call a strange market? A bizarre bazaar.”

With neural networks, data does the heavy lifting; you can show a program what to generate by feeding it a dataset of hundreds of thousands of examples. The network picks out patterns and emulates them when it generates text. (This is the same way computers “learn” how to recognize particular images.) Of course, neural networks don’t see like humans do. Networks analyze data inputs, whether pictures or text, as strings of numbers, and comb through these strings to detect patterns. The number of times your network analyzes the dataset — called iterations — is incredibly important: too few iterations, and the network won’t pick up enough patterns; too many, and the network will pick out superfluous patterns. For instance, if you want your network to recognize flamingos but you made it iterate on a set of flamingo pictures for too long, it would probably get better at recognizing that particular set of pictures rather than flamingos in general.

Moudgil created a dataset of 231,657 short jokes culled from the far corners of the Internet. He fed it to his network, which analyzed the jokes letter by letter. Because the network operates on a character level, it didn’t analyze the wordplay of the jokes; instead, it picked up on the probabilities of certain letters appearing after other letters and then generated jokes along similar lines. So, because many of the jokes in the training set were in the form “What do you call…” or “Why did the…”, the letter “w” had a high probability of being followed by “h”, the letter pair “wh” had high probabilities of being followed by “y” or “a,” and the letter sequence “wha” was almost certainly followed by “t.”

His network generated a lot of jokes — some terrible, some awful and some okay. Here’s a sample:

“I think hard work is the reason they hate me.”

“Why can’t Dracula be true? Because there are too many cheetahs.”

“Why did the cowboy buy the frog? Because he didn’t have any brains.”

“Why did the chicken cross the road? To see the punchline.”

Some read more like Zen koans than jokes. That’s because Moudgil trained his network with many different kinds of humor. While his efforts won’t get him a comedy writing gig, he considers them to be promising. He plans to continue his work, and he’s also made his dataset public to encourage others to experiment as well. He wants the machine learning community to know that, he says, “a neural net is a way to do humor research.” On his next project, Moudgil will try to eliminate nonsensical results by training the network on a large set of English sentences before he trains it on a joke dataset. That way, the network will have integrated grammar into its joke construction and should generate much less gibberish.

Other efforts have focused on replicating a particular comedian’s style. He Ren and Quan Yang of Stanford University trained a neural network to imitate the humor of Conan O’Brien.

Their model generated these one-liners:

“Apple is teaming up with Playboy in the self-driving office.”

“New research finds that Osama Bin Laden was arrested for President on a Southwest Airlines flight.”

Yes, the results read a bit more like drunk Conan than real Conan. Ren and Yang estimate only 12 percent of the jokes were funny (based on human ratings), and some of the funny jokes only generated laughs because they were so nonsensical.

These efforts show there’s clearly a lot of work to be done before researchers can say they’ve successfully engineered humor. “They’re an effective illustration of the state of computational humor today, which is both promising in the long term and discouraging in the short term,” says Misra. Yet if we ever want to build AI that simulates human-style intelligence, we’ll need to figure out how to code for funny. And when we finally do, this could turn our human fears of a machine uprising into something we can all laugh about.

Kevin Litman-Navarro is a freelance writer; his work has appeared in JSTOR Daily, Atlas Obscura, and the Los Angeles Review of Books. 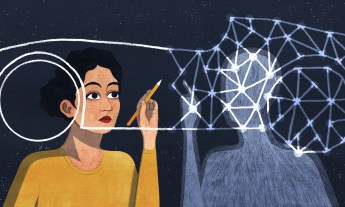 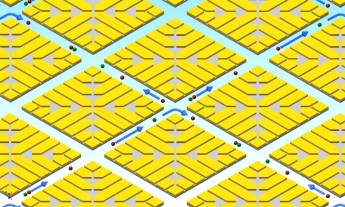 The jaw-dropping promise -- and brain-twisting challenge -- of quantum computing