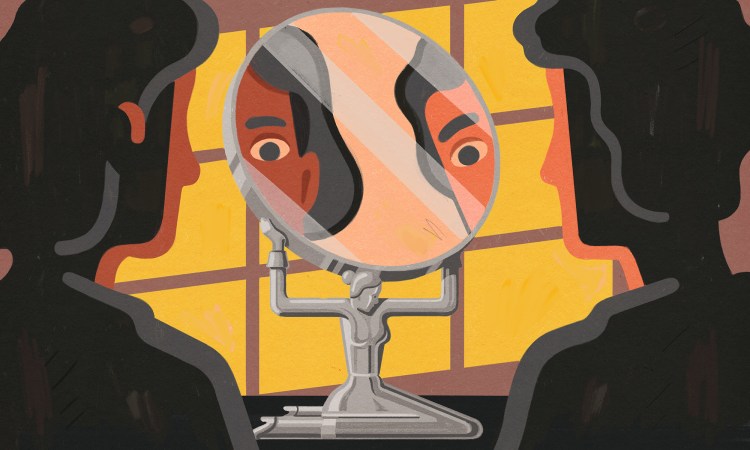 Leadership requires you to be present to the needs, abilities, and potential of other people — and to respond quickly and strategically to those signals.

But when it’s always all about you, that’s virtually impossible to do.

Here are 10 warning signs that you may be getting in your own way as a leader and making a habit out of self-distraction:

1. What other people experience rarely occurs to you.

The path to empowering other people starts with curiosity about what they’re thinking, feeling and doing. If you find yourself focused primarily on your own experience, then you’re still a distance from the emotional launchpad of leadership.

2. You don’t ask very many questions.

A measurable indicator of your interest in others is the number of questions you ask them or at least want to ask them. If this isn’t an impulse you feel very often, then you may be stuck in your own head.

The good news is that the remedy is actionable (get in there, inquiring minds!), and there’s a prize inside for going for it: People tend to become more interesting as you learn more about them.

3. The most interesting thing about other people is what they think of you.

We all care what other people think about us. This is different from caring so much that you’re disinterested in all the other thoughts someone else might be having. If you can’t sustain genuine interest in the ideas of other people — including those ideas that have nothing to do with you — then you haven’t yet earned the right to lead.

4. You’re constantly updating a catalogue of your own weaknesses, limitations and imperfections.

A loud inner critic can be a major distraction from the practice of leadership. Take advice from our friend Arianna Huffington (TED Talk: How to succeed? Get more sleep) and evict that obnoxious roommate from inside your head, the one spinning negative stories about you out of dubious data.

5. Other people’s abilities bum you out.

When you’re in an effective leadership state, the strengths and potential of the people around you become your greatest assets. If your primary response to other people’s capabilities is to feel worse about your own, then you probably need a healthy time-out from the leadership path. Do what it takes to nourish yourself (and stay off Instagram).

The human experience is fraught with moments that require immediate, unwavering attention to self — also known as “crises.” There’s no quota for how many of these you get to have in a month, year, or lifetime, but if your numbers are way above your peers’, then you’re probably not well positioned to lead them.

7. You’re pessimistic about the future.

Leadership is built on the assumption that tomorrow can be better than today. If you have a hard time buying into such a romantic idea, if you dismiss it along with rainbows and unicorns, then we suggest you try your hand at something else. Despair is the opposite of leadership.

When you’re regularly practicing leadership, the world is a pretty magical place, filled with progress to be made and human potential to be unleashed. It’s a red flag if it’s been a while since you’ve felt a sense of wonder at the unlimited possibilities around you.

9. Apathy and powerlessness are dominant emotions.

You may have come by these feelings very honestly, but leadership asks you to be in touch with your own agency and ability to influence your surroundings. It asks you to know your own power so — among other things — you can introduce other people to theirs. If you’re not feeling it, for whatever reason, then you won’t be able to pull this off.

If this sentence can be used to describe the way you move through the world, then you’re not in the leadership game. Period. Those of us hungry for leadership will eventually change the channel.

How many on these list did you identify with?

Leadership, at its core, isn’t about you. It’s about how effective you are at unleashing other people. Full stop. That’s it.

The practical definition we use in our work is that leadership is about empowering other people as a result of your presence — and making sure that impact continues into your absence.

We are scholars and writers, coaches and company builders, optimists and (on our best days) accelerators of action. It’s been our privilege to work as change agents at some of the world’s most influential organizations — companies like Uber, WeWork and Riot Games — and with some of the world’s most inspiring business leaders, people like Jen Morgan at SAP, Doug McMillon at Walmart, and Bozoma Saint John at, well, any room she decides to walk into.

But at our core, we are educators. We believe that our highest duty is to current and future generations of leaders who are willing to put themselves out there and try to build a better world.

As a leader, your job is to create the conditions for the people around you to become increasingly effective, to help them fully realize their own capacity and power. And not only when you’re in the trenches with them but also when you’re not around and even after you’ve permanently moved on from the team.

Leaders must be intentional about distributing power and decision rights, and then take total, unqualified responsibility for the outcome. Other people are making judgment calls all day, every day — and your job is to make sure that they’re getting it right, that their choices reflect the vision, values, and strategy of the organization.

Whenever we share our all-about-you warning signs with leaders, we find that most people can relate to at least a few of them. To be clear, if you saw yourself anywhere on that list, it doesn’t disqualify you from leadership.

Please know: We’ve all become stars of our own show at some point. But it does mean you may be able to improve as a leader if you start thinking more about how to empower other people.

So, try assessing your own leadership.

Recall a team that you’ve been on, one where you’ve spent some real time (no less than three months). Ask yourself: What happened to the slope of other people’s performance after you showed up? Did it go up or down? If it was flat or negative or simply not as steep as you know was possible, think back to the choices you made as a leader and teammate. What could you have done, big or small, to improve your team’s performance?

The purpose of this thought exercise is to start taking responsibility for the experiences of other people, which is the decision at the heart of empowerment leadership. Of course, there are things that can impact performance that have nothing to do with you, externalities that may be outside your control.

The point is to gain insight from the idea — however delusional you think it may be — that it all came down to your ability to create the conditions where other people could perform. If this level of accountability feels uncomfortable and unreasonable, then you’re doing the exercise correctly.

One way to activate your best thinking is by writing down your answers to our questions. We’ve taken thousands of executives through this exercise, and the piece of paper in front of them is never blank. We’ve all missed opportunities for impact, for one reason or another.

Now here’s where it usually gets interesting: Why did you miss the chance to fully empower another person or team or organization?

The answer we hear most often is that you made it somehow about you. You turned inward rather than outward, directing energy toward your own hopes and fears, rather than those of your team.

For some of us, the decision to lead has sometimes felt too presumptuous or risky. It can take courage to own your ability to make something better, and there can be financial or political costs in refusing to accept the status quo.

If you have a pattern of hesitating in the face of leadership opportunity, we suggest spending some time with this pattern. What held you back?

The truth is, we’re all susceptible to prioritizing security, which is incredibly helpful in getting us through the day (to say nothing of surviving the human experience). If your objective is to lead, however, then you’ll eventually need to give up some of that security, at least some of the time.

Our advice is to risk making other people the heroes of your leadership story. Sometimes protecting ourselves is the right choice, but we’re often unreliable calculators of personal risk and return.

In our experience, most people can handle far more exposure than they think they can — and almost everyone underestimates the meaning that leadership brings to their lives. In exchange for the anxiety of flying without a net, you get to travel to unimaginable places.

Frances Frei is a professor at Harvard Business School. She recently served as Uber's first Senior Vice President of Leadership and Strategy to help the company navigate its crisis in leadership and culture. Frei regularly works with companies embarking on large-scale change and organizational transformation, including embracing diversity and inclusion as a lever for improved performance.

Anne Morriss is a highly sought-after leadership coach and the executive founder of the Leadership Consortium, a first-of-its-kind leadership accelerator that works to help more and diverse leaders thrive. Her collaborators have ranged from early-stage tech founders to Fortune 50 executives to public-sector leaders building national competitiveness. She has spent the last 20 years building and leading mission-driven enterprises, serving most recently as founder and CEO of GenePeeks, which addressed the urgent need for better personal health information.