Maxims and mottoes from masters of one-liners: A reading list 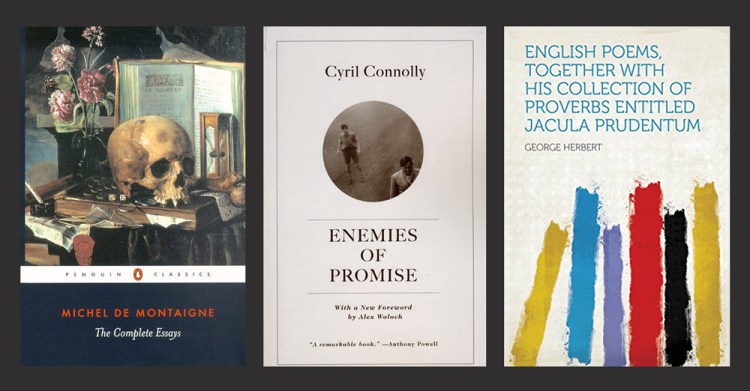 “Fiction is a dignified form of lies.” “What’s hard to express is easy to understand.” “Everything existing in the universe is the fruit of chance and necessity.” Professional aphorist and all round word nerd James Geary (TED Talk: Metaphorically speaking) collects aphorisms like these — and documents their provenance in his own books. Here, check out his list of must-read books from other authors covering literary life, proverbs, aphorisms, and the art of being quoted.

“Barfield is a forgotten genius, and this book is his excavation of the metaphors buried in some of the most common English words. ‘Every modern language,’ he writes, ‘with its thousands of abstract terms and its nuances of meaning and association, is apparently nothing, from beginning to end, but an unconscionable tissue of dead, or petrified, metaphors. … A man cannot utter a dozen words without wielding the creations of a hundred named and nameless poets.'”

“Cyril Connolly was the archetypal man of letters: astute, astonishingly well-read and brilliantly argumentative. He wrote eloquently on the art of writing and the compulsion, even the duty, to produce masterpieces. The Unquiet Grave, published just after World War II, is a lively mix of his own ruminations on writing and extracts by and about his favorite French aphorists.”

“Not exactly an aphorism anthology, The Practical Cogitator nevertheless contains quite a few of them and remains one of the most idiosyncratic collections ever compiled. The book contains many lengthy prose passages as well as some poetry. But the whole is aphoristic in intent and impact. In their preface, Curtis and Greenslet explain they’ve included ‘nothing that is not worth re-reading. Some things that can be chewed over almost indefinitely. Pieces that are tough enough, juicy enough to chew. Some that are scarcely worth reading only once. … There is no attempt at complete exposition. The extracts provide pegs, stout and well driven in, on which you can hang your own further thoughts.'”

“The literary life was considered an unseemly profession for someone of von Ebner-Eschenbach’s gender and noble lineage. Yet, even as a child, the Austrian countess devoted herself to writing, and while still a teenager, she impressed some of the Hapsburg Empire’s most famous authors with her poetry and prose. Though she lived a conventional life as the wife of a minor aristocrat, she held liberal views about the role of women in society and advocated moderate political reforms that would have deprived the aristocracy of some of its privileges. It was not until 1880, when von Ebner-Eschenbach was 50, that she published her first collection of aphorisms, including, ‘It takes less courage to be the only one to find fault than to be the only one to find favor.'”

“First published in 1651 by English priest and metaphysical poet George Herbert, this is an amazing compilation of English proverbs juxtaposing serious, spiritual sayings with funny, cynical ones. For example: ‘When you finish the house, leave it.'”

“This trove of manuscripts dates from the early days of Christianity, around the fourth century. Discovered by some shepherds in Egypt just after World War II, the papers consist of fascinating variations on what we have come to know as the canonical gospels as well as esoteric scriptures from the Gnostic movement and the Essenes, communities of ascetics and mystics of which some suggest Jesus was a part. The Gospel of Thomas is a collection of the sayings of Jesus and is probably as close to his actual words as we are ever likely to come — no miracles, no healings, no raising of the dead; just what the man himself is said to have said. My favorite: ‘Become as passersby.’ The shepherds who discovered the manuscripts used some of them as kindling before selling them to antiquities dealers.”

“‘Life is too short to write long things,’ Lec once remarked. Born in Lvov, a city that in 1909 was in southeastern Poland but is now part of Ukraine, Lec came from a wealthy and aristocratic family. With the dismantling of the Austro-Hungarian Empire after World War I, he and his family lost most of their money and privileges. When World War II broke out, Lec was sent to a concentration camp in Tarnopol. He survived there for two years until he managed to escape by donning a stolen German uniform. Back in Warsaw, he joined the communist resistance, first as an editor of underground periodicals and then as part of the guerrilla movement. After the war, Lec remained affiliated with the communists, serving as the press attaché at the Polish consulate in Vienna from 1946 to 1950. But he gradually grew disillusioned with communism. In his aphorisms, Lec parodied the feel-good platitudes and propaganda put out by the communist party machine. ‘Why do I write these short aphorisms?’ he once asked. ‘Because words fail me!’ One of the greatest aphorists of the 20th century, Lec is hard to find in English translation. (I also recommend his More Unkempt Thoughts).”

9. On the Shoulders of Giants
Robert K. Merton
University of Chicago Press, 1993

“First published in 1965, On the Shoulders of Giants is a profound, provocative peregrination along the trail of the aphorism, ‘If I have seen farther it is by standing on the shoulders of giants.’ Merton demonstrates — through a series of astonishingly erudite, scholarly and witty digressions — that this saying, commonly attributed to Isaac Newton, was actually first coined by Bernard of Chartres, in the 12th century. If you like aphorisms, and love learning about wildly different domains and ideas, this book is a masterpiece.”

“Reading these reflections on everything from the afterlife to the satisfactions of scratching an itch is like being inside de Montaigne’s mind. His style is so easy, so intimate, and his interests and insights so far-reaching that, in the end, the book becomes an encyclopedia of one person’s life and, in many ways, of all our lives. ‘Even on the highest throne we are seated still upon our arse.'”

“Along with Stanislaw Lec, Antonio Porchia is one of the greatest aphorists of the 20th century. He was born in or around the village of Conflenti in southern Italy. His father died when he was 12 and his mother decided to move the family — Antonio and six siblings — to Argentina. The Porchias settled in one of the many Buenos Aires barrios that were filling up with Italian immigrants looking to escape the poverty of their homeland. Porchia took a variety of odd jobs after his arrival, including as a dockworker, carpenter and basket weaver. He eventually bought a printing press and until 1936, when he retired to his garden and to his writing, ran a small printing business with his brothers. Porchia was well into his 60s before anyone outside his immediate circle of friends knew anything about his aphorisms, which included: ‘We become aware of the void as we fill it.'”

“La Rochefoucauld was a broken and bitter middle-aged man when he began writing maxims in the 1650s. In his youth, he had been a wealthy and influential courtier. But he emerged a big loser from the series of civil wars known as the Fronde. La Rochefoucauld paid a heavy price for his insurgency. He was financially ruined, his family was driven from their ancestral home, and his other properties were seized and ransacked. His career prospects were obliterated, he was stripped of his titles and banished from Paris. When La Rochefoucauld published his Maximes in 1665, the public was scandalized by their cynicism. La Rochefoucauld become close friends with another aphorist, Madeleine de Souvré, Marquise de Sablé, and came to rely on her conversation and criticism during the composition of aphorisms like, ‘How comes it that our memories are good enough to retain even the minutest details of what has befallen us, but not to recollect how many times we have recounted them to the same person?'”

“This slight volume (less than 70 pages) is a beguiling and eloquent meditation of the use of the conceit (i.e. extended metaphor) in 17th-century metaphysical poetry.” 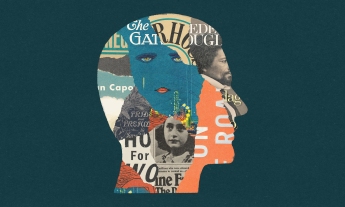 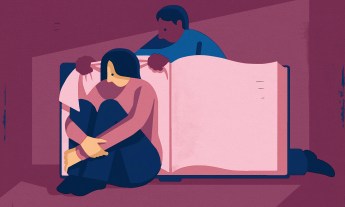