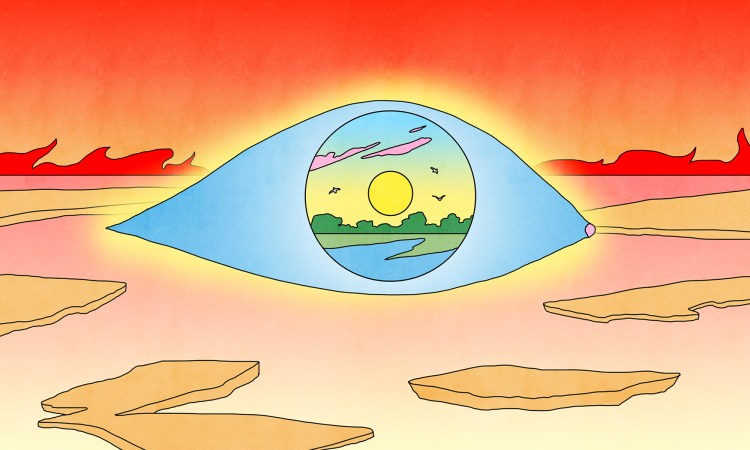 The winters, springs, summers and autumns, the rainy and dry seasons that we remember will not be those that our children and their children will enjoy. It’s rare today to find someone over 50 who isn’t conscious that the weather patterns that defined their childhoods are being quickly and drastically altered.

Glaciers and lakes are rapidly retreating, and our oceans are choking in plastic. Ancient bones and diseases are surfacing in the permafrost. As our weather and landscapes change before our eyes, as millennial signposts of natural rhythms disappear, our understanding of the ways of the world is unraveling. Things don’t make sense the way they used to.

We need to take responsibility for this reality by facing the uncertain future with as much courage as we can muster.

We cannot hide from the grief that flows from the loss of biodiversity and the impoverished lives of future generations. We have to feel the full force of this new reality in our bones. There is a power to consciously bearing witness to all that is unfolding without turning away, and counterintuitively, you may actually feel better about the situation when you deeply accept the reality of it.

And beyond this, we also then need to look to the future and set our sights on what we can still create. The changes to come will be more disorienting than those we have already experienced, and it will be easy to lose our footing unless we can clearly see where we want to go. We need to take responsibility for this reality by facing the uncertain future with as much courage as we can muster. Doing so requires us to understand why we must meet this moment with energy and commitment.

For years, the countries of the world tried to reach a global agreement on climate change. The effort became so all-encompassing that the challenge being attempted began to merge with the reason for doing it. The vision became securing a global agreement. As powerful and important as it was, the global agreement was actually a goal in service of a vision. The vision was, and still is, a regenerative world where humans and nature can thrive.

Confusing vision with goals is easy. A goal is a specific target that we set on the way to achieving a vision. It includes the strategies and tactics we use in moving toward the vision.

Hold on to your vision, but remain flexible and adaptive about the route to get there as it may change based on circumstances.

Goals are critical, but we also need a vision to inspire the kind of commitment and energy we will need to get through the difficult years ahead. If we don’t have a vision, our goals alone may not afford us the flexibility necessary to achieve the vision. And if we lose sight of the big picture and become fixated on how to achieve it, at best, progress can grind to a halt, or worse, divisiveness can take hold.

However, for those eager to take action, fixating on the vision can feel irresponsible and unconnected to reality. When we are caught up in the issues of today — communities decimated by increasingly violent weather patterns; the unbridgeable chasm between the rich and the poor; rapacious multinational companies focused on short-term profits rather than long-term value; and political leaders bent on driving divisions between nations and within nations — having a vision can seem naïve and wishful thinking. The distance between projecting a vision of a better world and realizing it through concerted action can sometimes seem unbridgeable.

Having a vision is essential, but we have to be open to doing things in new ways. So hold on to your vision, but remain flexible and adaptive about the route to get there. The route may change based on circumstances, while the vision remains a fixed North Star, a guide and a destination.

Stubborn optimism needs to motivate you daily; you always need to bear in mind why you feel the future is worth fighting for.

Start with why. You do not have to believe your vision is likely to be achieved or that the struggle to achieve it is going well, to keep pursuing it. You may conclude that we cannot turn this ship around in time, that we are going to crash, and that our vision is unattainable. That thought is not irrational.

What would be irrational is to imagine that the reasons for building a better future are therefore diminished. Stubborn optimism needs to motivate you daily; you always need to bear in mind why you feel the future is worth fighting for. The essential “why” should be the driving force of all efforts to combat climate change no matter what.

Imagination is essential. Ideologies and ways of organizing this world can seem very ingrained, but they are subject to major disruption more easily than you think.

Imagination is going to be critical as we work to transform today’s urban sprawl to make it fit for the future. Some futurists have predicted that in the course of a decade, the rise of the autonomous, shared, on-demand electric car means we will need 80 percent fewer cars on the roads than we do now. This will free up huge areas of urban space that are currently used as parking lots.

In London, for instance, it could mean that 70 percent of the space currently used for parking cars — or the equivalent of about 5,000 sports fields — could become available for growing food, rewilding or building sustainable housing.

Much of what we imagine to be permanent is more ephemeral than we realize. Sometimes imagination can seem naïve, but don’t belittle thinking big. Time and again societies have turned seeming fantasies into realities when circumstances require something new.

We cannot and should not turn away from the pain, but that heartbreak should spur us on to greater action rather than sink us into a pit of blame, despair or hopelessness.

Keep your eyes on what’s to come. There will be times when we feel we are failing. However much we progress, we will see some deterioration in our environment and our society. Heartbreakingly, people will die as a result of climate change, land that people live on will become uninhabitable, and species will continue to become extinct — all causes for real grief, and grieving is needed.

Give adequate time and space for that necessary mourning, and seek support from your communities — both are extremely important. We cannot and should not turn away from the pain, but that heartbreak should spur us on to greater action rather than sink us into a pit of blame, despair or hopelessness.

As Maya Angelou said so eloquently: “You may encounter many defeats, but you must not be defeated. In fact, it may be necessary to encounter the defeats, so you can know who you are, what you can rise from, how you can still come out of it.”

A world that has become richer in the active use of vision and imagination is a much more vibrant, inspiring and joyful place.

A compelling vision is like a hook in the future. It connects you to the pockets of possibility that are emerging and helps you pull them into the present. Hold on to that. Stay firmly fixed to a vision of a world you know is possible. This act is radical resistance to the belief that solving our problems is beyond us.

When Martin Luther King Jr, stood on the steps of the Lincoln Memorial in August 1963, the outlook for race relations in the United States was grim. Just months earlier, Alabama governor George Wallace had stood outside the Alabama state capital and declared, “Segregation now, segregation tomorrow, segregation forever.”

To enforce segregation, police unleashed dogs and water cannons on protesters, even on children as young as six. Even those who supported civil rights felt that change was too far off and the campaign was hopeless. Given that context, King’s words about having a dream were like a light in darkness. He didn’t know how it was going to happen, but he held tight to his vision of a society in which people were treated equally regardless of their race.

The following year his persistence led to the passage of the Civil Rights Act, and his vision lived on after his death, inspiring equal rights movements across the world and embedding nonviolent protest as a cornerstone of political protest movements.

A world that has become richer in the active use of vision and imagination is a much more vibrant, inspiring and joyful place. In these complex times, we often lament the lack of global leaders who can show us the way and help guide us. Those people are important, but we must all believe that the world is worth saving and a regenerative future is utterly possible.

In the end, we are not going to solve this problem by hoping that our democratic systems produce enlightened leadership. They might, but the survival of our species can’t depend on the partisan lines of a divided electorate. Instead, we must all embrace a strong vision of a better future.

Excerpted from the new book The Future We Choose: The Stubborn Optimist’s Guide to the Climate Crisis by Christina Figueres and Tom Rivett-Carnac. Copyright © 2020 by Christina Figueres and Tom Rivett-Carnac. Published by arrangement with Vintage Books, an imprint of The Knopf Doubleday Group, a division of Penguin Random House LLC.

Christiana Figueres is an internationally recognized leader on global climate change and the architect of the historic 2015 Paris Agreement.

Tom Rivett-Carnac is a political strategist focused on creating a better future. He works at the highest levels of business and government to find creative ways to accelerate solutions to the climate crisis.