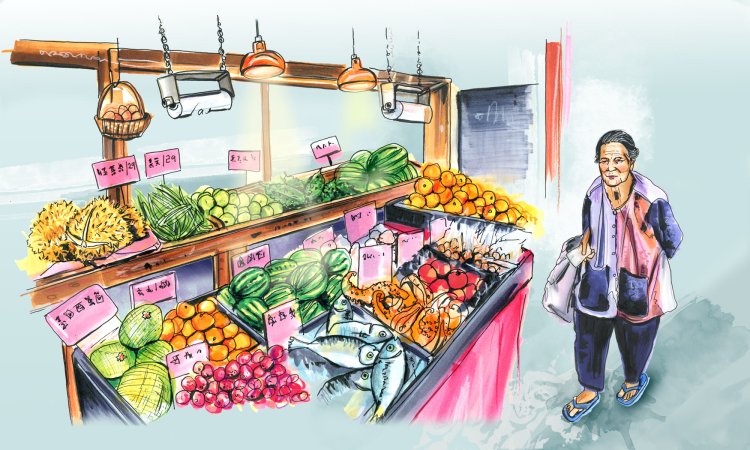 Food feeds the soul. To the extent that we all eat food, and we all have souls, food is the single great unifier across cultures. But what feeds your soul?

For me, a first-generation Korean-American, comfort food is a plate of kimchi, white rice, and fried Spam. Such preferences are personally meaningful — and also culturally meaningful. Our comfort foods map who are, where we come from, and what happened to us along the way. Notes Jennifer 8. Lee (TED Talk: Jennifer 8. Lee looks for General Tso), “what you want to cook and eat is an accumulation, a function of your experiences — the people you’ve dated, what you’ve learned, where you’ve gone. There may be inbound elements from other cultures, but you’ll always eat things that mean something to you.”

In much of China, only the older generations still shop every day in the wet market, then go home and cook traditional dishes.

Jennifer Berg, director of graduate food studies at New York University, notes that food is particularly important when you become part of a diaspora, separated from your mother culture. “It’s the last vestige of culture that people shed,” says Berg. “There’s some aspects of maternal culture that you’ll lose right away. First is how you dress, because if you want to blend in or be part of a larger mainstream culture the things that are the most visible are the ones that you let go. With food, it’s something you’re engaging in hopefully three times a day, and so there are more opportunities to connect to memory and family and place. It’s the hardest to give up.”

The “melting pot” in American cuisine is a myth, not terribly unlike the idea of a melting pot of American culture, notes chef Dan Barber (TED Talk: How I fell in love with a fish). “Most cultures don’t think about their cuisine in such monolithic terms,” he says. “French, Mexican, Chinese, and Italian cuisines each comprise dozens of distinct regional foods. And I think “American” cuisine is moving in the same direction, becoming more localized, not globalized.”

Most cultures don’t think about their cuisine in monolithic terms. Mexican, Chinese and French cuisines each comprise dozens of distinct regional foods.

American cuisine is shaped by the natural wealth of the country. Having never faced agricultural hardship, Americans had the luxury of not relying on rotating crops, such as the Japanese, whose food culture now showcases buckwheat alongside rice, or the Indians, or the French and Italians, who feature lentils and beans alongside wheat. “That kind of negotiation with the land forced people to incorporate those crops in to the culture,” says Barber. And so eating soba noodles becomes part of what it means to be Japanese, and eating beans becomes part of what it means to be French. 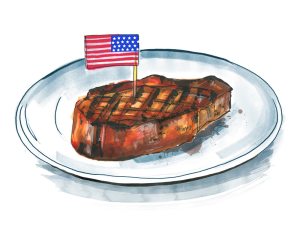 So if what we eat is what we are, what are Americans? Well, meat. “If Americans have any unifying food identity, I would say we are a (mostly white) meat culture,” says Barber. “The protein-centric dinner plate, whether you’re talking about a boneless chicken breast, or a 16-ounce steak, as an everyday expectation is something that America really created, and now exports to the rest of the world.”

Every single culture and religion uses food as part of their celebrations, says Ellen Gustafson, co-founder of the FEED Project and The 30 Project, which aims to tackle both hunger and obesity issues globally. (Watch her TED Talk: Obesity + hunger = 1 global food issue.) “The celebratory nature of food is universal. Every season, every harvest, and every holiday has its own food, and this is true in America as well. It helps define us.”

Sometimes food means survival. While the Chinese cooks who exported “Chinese” food around the world ate authentic cooking at home, the dishes they served, thus creating new cuisines entirely, were based on economic necessity. Chinese food in America, for example, is Darwinian, says Lee. It was a way for Chinese cooks to survive in America and earn a living. It started with the invention of chop suey in the late 1800s, followed by fortune cookies around the time of World War II, and the pervasive General Tso’s Chicken, in the 1970s. Waves of more authentic Chinese food followed, as Hunan and Sichuan cooking came to the U.S. by way of Taiwan.

In Chinese cities, meanwhile, only grandparents are cooking and eating the way that people from outside of China might imagine “Chinese” food. The older generation still would shop every day in the wet market, bargain for tomatoes, then go home that night and cook traditional dishes, says Crystyl Mo, a food writer based in Shanghai. But most people born after the Cultural Revolution don’t know how to cook. “That generation was focused purely on studying, and their parents never taught them how to cook,” says Mo. “So they’re very educated, but they’re eating takeout or going back to their parents’ homes for meals.”

Those slightly younger people have been the beneficiaries of the restaurant culture exploding in Shanghai. The city is home to 23 million people, and has more than 100,000 restaurants, up from less than ten thousand a decade ago. Now, you can find food from all of the provinces of China in Shanghai, as well as every kind of global food style imaginable.

The introduction of global foods and brands has compounded food as a status symbol for middle-class Chinese.

The introduction of global foods and brands has compounded food as a status symbol for middle-class Chinese. “Food as status has always been a huge thing in China,” says Mo. “Being able to afford to eat seafood or abalone or shark’s-fin or bird’s-nest soup, or being able to show respect to a VIP by serving them the finest yellow rice wine, is part of our history. Now it’s been modernized by having different Western foods represent status. It could be a Starbucks coffee, or Godiva chocolates, or a Voss water bottle. It’s a way of showing your sophistication and worldliness.”

Eating is done family style, with shared dishes, and eating is the major social activity for friends and families. Eating, exchanging food, taking photos of food, uploading photos of food, looking at other people’s photos of food — this is all a way that food brings people together in an urban center. Even waiting in line is part of the event. People may scoff at the idea of waiting two hours in line to eat in a trendy restaurant, says Mo, but waiting in line for a restaurant with your friends is an extension of your experience eating with them.

How and why you eat your food, is, of course, also very cultural. In China, people eat food not necessarily for taste, but for texture. Jellyfish or sliced pig ear don’t have any taste, but do have desirable texture. Foods must either be scalding hot or very cold; if it’s warm, there’s something wrong with the dish. At a banquet, the most expensive things are served first, such as scallops or steamed fish, then meats, then nice vegetables, and finally soup, and if you’re still hungry, then rice or noodles or buns. “If you started a meal and they brought out rice after the fish, you’d be very confused,” says Mo. “Like, is the meal over now?”

“Food in France is still primarily about pleasure,” says Mark Singer, technical director of cuisine at Le Cordon Bleu in Paris. “Cooking and eating are both past time and pleasure.” The French might start their day with bread, butter, jam, and perhaps something hot to drink — “There’s no way that it would expand to eggs and bacon,” says Singer — but it’s a time of the day when the whole family can be united. Singer, who was born in Philadelphia, has lived in France for more than 40 years. (He doesn’t eat breakfast.)

“Things have changed dramatically in the past 20 years when it comes to food in the country,” he says. “What was a big affair with eating has slowly softened up. There are still events in the year, like birthdays and New Year’s Eve and Christmas Eve that still say really anchored into traditional food and cooking. But it’s not every day.”

Some of the ideas of French food life may be a performance, adds Berg. “I led a course in Paris this summer on myth-making and myth-busting and the performance of Frenchness. The students want to believe that France is this pastoral nation where people are spending five hours a day going to 12 different markets to get their food. The reality is most croissants are factory made, and most people are buying convenience food, except for the very elite. But part of our identity relies on believing that mythology.”

An Italian child’s first experience with food is not buns or rice or eggs, but probably ice cream. 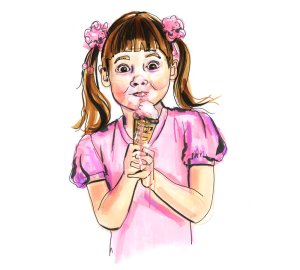 How a country savors a food is also telling. In Italy, as in France, takeout is still relatively rare. “Eating fast is not at all part of our culture,” says Marco Bolasco, editorial director of Slow Food and an Italian food expert. Our meals are relaxed, even during lunch break.”

Food in Italy is love, then nutrition, then history, then pleasure, he says. An Italian child’s first experience with food is not buns or rice or eggs, but probably ice cream, notes Bolasco. Status and wealth play less of a role in food than say, in China.

In Arab cultures, community is key to the food culture. The daily iftar that breaks the fast during Ramadan, for example, features platters of traditional fare such as tharid and h’riss that are shared by all who are sitting down to break the fast, eating with their hand from the same dishes. Families and institutions will host private iftars, of course, but mosques, schools, markets and other community organizations will also offer large iftar meals, and all are open to the public and shared. This family style of eating is not dissimilar to the dishes on a Chinese dinner table, where one does not eat a single portioned and plated dish, but is expected to eat from shared, communal platters.

Perhaps cuisine, though, isn’t so much about progress as it is about restraint.

“One of the great things about cuisine is that it the best way to hold back our worst kind of hedonism,” says Barber. “There is no landscape in the world that sustainably allows us to eat how we think we want to.” In another sense, says Barber, food is the physical manifestation of our relationship with the natural world. It is where culture and ecology intersect. It can become even more important than language, and even geography, when it comes to culture.

“Your first relationship as a human being is about food,” says Richard Wilk, anthropology professor at the University of Indiana and head of its food studies program. “The first social experience we have is being put to the breast or bottle. The social act of eating, is part of how we become human, as much as speaking and taking care of ourselves. Learning to eat is learning to become human.”

Illustrations by Andrea Turvey for TED.

What is it about bees? Three experts on why they’re fascinating, why they’re dying, what can save them 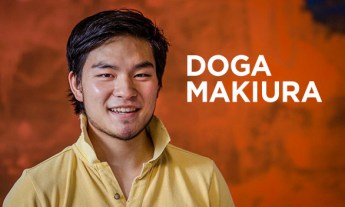