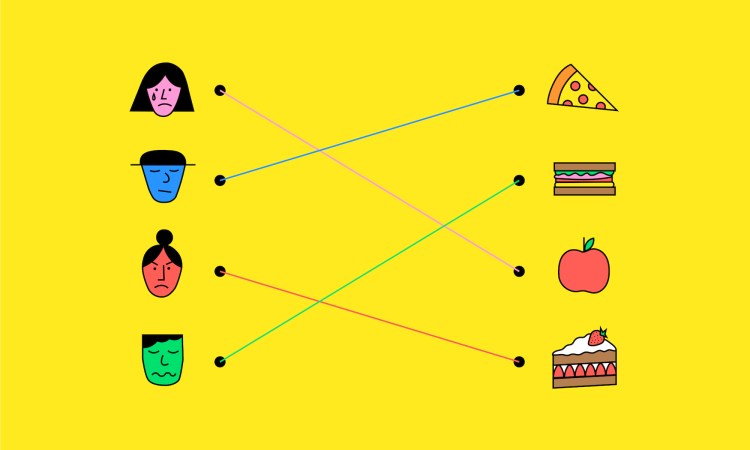 Here are three common-sense tips to help you feed your hunger and not your emotions, from dietician Eve Lahijani.

Imagine if eating were as simple as, say, refueling a car. You’d fill up only when an indicator nudged towards E, you couldn’t possibly overdo it or else your tank would overflow, and you’d never, ever dream of using it as a treat.

Instead, for many of us, eating is anything but straightforward. What starts out as a biological necessity quickly gets entangled with different emotions, ideas, memories and rituals. Food takes on all kinds of meanings — as solace, punishment, appeasement, celebration, obligation – and depending on the day and our mood, we may end up overeating, undereating or eating unwisely.

It’s time for us to rethink our relationship with food, says Eve Lahijani, a Los Angeles-based dietician and a nutrition health educator at UCLA. She offers three common-sense steps to help get there.

1. Reconnect with your hunger.

So many things drive us to eat — it’s noon and that means lunchtime, it’s midnight and that means snack time, we’re happy, we’re anxious, we’d rather not bring home leftovers, we’re too polite to say no, we’re bored, and oh, wow, has someone brought in donuts?!?

Similarly, we suppress our appetite for a myriad of reasons — we’re too busy, we’re sad, we’re mad, nobody else is eating, it’s too early, it’s too late, we’re too excited.

Now try doing this: Eat only when you’re hungry; stop when you’re full. “It may seem obvious to you,” concedes Lahijani. Still, think over your past week: How many times did you eat when you weren’t hungry?

She suggests that we think about our hunger and our fullness on a 0-10 scale, with 0-1 being famished and 9-10 being painfully stuffed (as in holiday-dinner stuffed). She says, “You want to begin eating when you first get hungry, and that correlates with the three or a four on the scale and [to stop] … when you first get comfortably full, a six or seven on the scale.”

The reason you shouldn’t wait until you’re starving (or, 0-2 on the scale) is because that’s when people tend to make nutritionally unsound choices. If you’ve ever gone to the supermarket when you were ravenous, you probably didn’t fill up your cart with produce; you gravitated towards the high-calorie, super-filling items.

Lahijani says, “It’s also wise to eat when you first get hungry because you’re more likely to enjoy your food [and] you’re more likely to eat mindfully … When you let yourself get too hungry, chances are, you’re eating really fast and not really paying attention. In fact, one of the biggest predictors of overeating is letting yourself get too hungry in the first place.”

2. Feed your body what it is craving.

When Lahijani was a stressed-out college and graduate student, her eating took one of two forms: she was either dieting or bingeing. As she says: “Whenever I was on a diet, the diet told me what to eat,”; while on a binge, she’d eat whatever was convenient or go all out on foods forbidden by her then-diet. Developing a different relationship with food meant stepping out of those patterns. “Instead of listening to others’ opinions of what I should eat, I became silent and I tuned into my own body,” she says. “I fed my body what it was craving.”

It turns out Lahijani didn’t crave junk food. She says, “I was actually tasting things for the first time, because my mind wasn’t filled with judgment and guilt. I actually found that my body actually craved nurturing, nourishing foods like vegetables and fruits. I actually liked my sister’s kale and quinoa salad.”

3. Try not to use food as a reward or a punishment.

It’s not surprising that we do this. After all, as children, we quickly learn that rejoicing and parties come with cake, while transgressions result in … no cake. But one of the great things about being an adult is, we can establish our own associations. By all means, let’s continue to mark our birthdays with cake — or with fresh fruit and a stockpot of homemade veggie chili if that’s what you prefer. Or, celebrate in ways that have nothing to do with eating. You can set your own rules now.

When Lahijani’s fraught feelings about food eased, she was surprised to find these effects go beyond eating. “What’s really interesting is to see how making peace with food affected other areas of my life. As I learned how to listen to myself, I became better at listening to others, I became more empathetic,” she says. “As I made a point to trust myself, I became more trusting in my relationships and more vulnerable, and as I became more loving to myself … I learned what it meant to love someone else.”