In 1998, aircraft designer Paul MacCready gave a live demo of his two-ounce unmanned surveillance drone on the TED stage in Monterey. “You see what it sees. Imagine you’re a fly,” he told the assembled audience, who watched the drone’s footage projected onto the screen in front of them. (The moment is captured in the GIF below.) To the crowd’s delight, the drone whizzed overhead, circling the auditorium and beaming back live video imagery.

“Where all this leads, I don’t know,” MacCready acknowledged. “Is it practical? I don’t know.”

The 15 ensuing years have answered that question comprehensively. Drones are not only practical, they’re now a fact of life. They’ve come a long way since MacCready’s rudimentary black-and-white film-shooting prototype… and more have also had their moment on the TED stage. In 2012, Regina Dugan, then the director of DARPA, showed off a drone designed to resemble an innocuous humming bird. That same year, Vijay Kumar described the terrific opportunities of “autonomous agile aerial robots” and made a passionate case for the potential of drones’ role in disaster relief — or even construction.

But drones are controversial for good reason. Not everyone is so blinded by the technology as to forget that potential applications don’t have to be world-saving but can in fact be terrorist — or criminally-minded. As political scientist P. W. Singer said in a piece also published by TED, “it’s one of the challenges for an organization like TED. On one hand it wants to raise awareness of all the new things that are possible in the world, but it also has to be sure to avoid triumphalism or an immature notion that technology is somehow the solution to all our problems. Whether it is a stone or a drone, technology is merely a tool that you can use for both good and bad purposes.”

It’s certainly a balance worth keeping. But also, GIFs. Here, check out some more great drone-related moments that have taken place on the TED stage. (And do check out the full talks, too.)

At TED2012, roboticist Vijay Kumar discussed the potential of flying quadrotors to act as first responders in a disaster, or to move cumbersome materials in construction. He concluded with an exclusive video made just for TED: nine autonomous drones playing six musical instruments to play … well, watch for yourselves.

At TED2012, then-director of DARPA, Regina Dugan (she later went to work at Google) demonstrated a hummingbird drone. “It can fly in all directions, even backwards. It can hover and rotate,” she said. “This prototype aircraft is equipped with a video camera, it weighs less than one AA battery. It does not eat nectar.”

Let’s deliver medicine and supplies to the billion people on the planet who do not have all-season access to roads, suggests Andreas Raptopoulos, who’s working with Matternet to “create the next paradigm for transportation using networks of small unmanned flying vehicles.”

Wait. This quadcopter is balancing a glass of water in mid-air? In a mind-blowing demo from TEDGlobal 2013, robotics professor Raffaello D’Andrea demonstrated drones that play catch, balance and make decisions together — as well as act as a personal waiter. 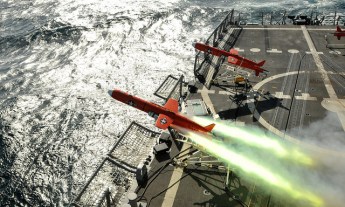 Who's making the case for -- and against -- military drones?