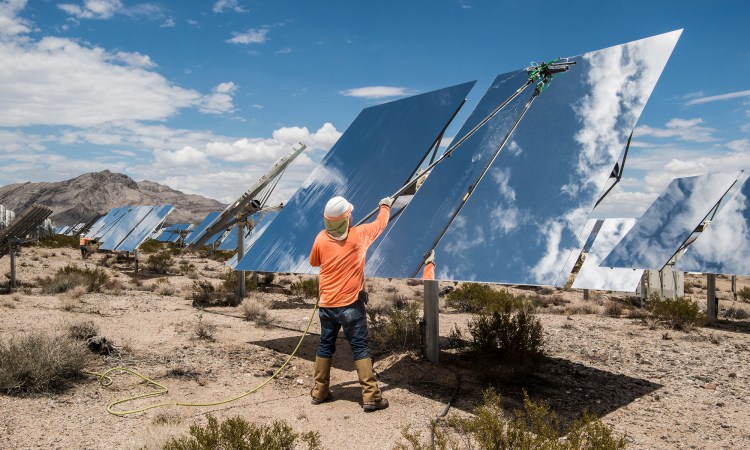 There are two numbers you need to know about climate change. The first is 51 billion. The other is zero.

Fifty-one billion is how many tons of greenhouse gases the world typically adds to the atmosphere every year. Although the figure may go up or down a bit from year to year, it’s generally increasing and this is where we are today. (Note: 51 billion tons is based on the latest available data. Global emissions dropped a bit in 2020, because the COVID-19 pandemic slowed the economy so dramatically. But since we don’t know the exact figure for 2020, I will keep using 51 billion tons as the total.)

Zero is what we need to aim for. To stop the warming and avoid the worst effects of climate change — and these effects will be very bad — humans need to stop adding greenhouse gases to the atmosphere.

When I started learning about climate change, I kept encountering facts that were hard to get my head around. For one thing, the numbers were so large. Another problem was that the data I was seeing often appeared devoid of context. One article said that an emissions-trading program in Europe had reduced the carbon footprint of the aviation sector there by 17 million tons per year. That sounds like a lot, but is it? But what percentage of the total does it represent? The article didn’t say, and that kind of omission was surprisingly common.

Eventually, I built a mental framework for the things I was learning. It gave me a sense of how much was a lot and how much was a little, and how expensive something might be. It helped me sort out the most promising ideas.

The framework of five questions that I came up with still comes in handy today, whether I’m hearing an energy investment pitch or talking with a friend. Now when you read an editorial proposing a climate fix or hear politicians touting their plans for climate change, this framework will help you cut through the clutter.

Question #1: How much of the 51 billion tons are we talking about?

Whenever I read something that mentions some amount of greenhouse gases, I do some quick math, converting it into a percentage of the annual total of 51 billion tons.

Consider the aviation example I mentioned above, the program that’s getting rid of 17 million tons a year. Divide it by 51 billion and turn it into a percentage, and that’s a reduction of about 0.03 percent of annual global emissions. Is that a meaningful contribution?

At Breakthrough Energy Ventures, an investor-led fund that aims to build new, cutting-edge companies that will lead the world to net zero emissions, we fund only technologies that could remove at least 500 million tons a year if they’re successful and fully implemented. That’s roughly 1 percent of global emissions.

Technologies that will never exceed 1 percent shouldn’t compete for the limited resources we have for getting to zero. There may be other good reasons to pursue them, but significant emission reduction won’t be one of them.

Question #2: What’s your plan for cement?

If you’re talking about a comprehensive plan for tackling climate change, you need to consider everything that humans do to cause greenhouse gas emissions. Some things, like electricity and cars, get lots of attention, but they’re only the beginning.

Meanwhile, making steel and cement alone accounts for around 10 percent of all emissions. So the question “What’s your plan for cement?” is just a shorthand reminder that if you’re trying to come up with a comprehensive plan, you have to address the major sources of emissions.

Here’s a breakdown of all the human activities that produce greenhouse gases. Getting to zero means zeroing out every one of these categories:

Question #3: How much power are we talking about?

This question mostly comes up when thinking about electricity. You might read that a new power plant will produce 500 megawatts. Is that a lot? And what’s a megawatt, anyway?

A watt is pretty small. A small incandescent bulb might use 40; a hair dryer uses 1,500; a power plant might generate hundreds of millions of watts; and the largest power station in the world, the Three Gorges Dam in China, can produce 22 billion watts.

Because these numbers get big fast, it’s convenient to use some shorthand. A kilowatt is 1,000 watts, a megawatt is a million and a gigawatt is a billion. Here are rough comparisons that help me keep it all straight.

Of course, there’s considerable variation throughout the day and throughout the year. New York City runs on upwards of 12 gigawatts, depending on the season; Tokyo, with a larger population than New York, needs something like 23 gigawatts on average but can demand more than 50 gigawatts at peak use during the summer.

Let’s say you want to power a mid-size city that requires a gigawatt. Could you simply build a one-gigawatt power station and be done? Not necessarily.

The answer depends on your power source, because some are more intermittent than others. A nuclear plant runs 24 hours a day and is shut down only for maintenance and refueling. But the effective capacity of plants powered by wind and solar panels might be 30 percent or less because the wind doesn’t always blow and the sun doesn’t always shine. You’ll need to supplement them to get one gigawatt reliably.

Question #4: How much space do you need?

Some power sources take up more room than others. This matters for the obvious reason that there is only so much land and water to go around. Space is far from the only consideration, but it’s an important one that we should be talking about.

Power density is the relevant number here. It tells you how much power you can get from different sources for a given amount of land (or water, if you’re putting wind turbines in the ocean). It’s measured in watts per square meter. Below are a few examples:

The power density of solar is considerably higher than that of wind. If you want to use wind instead of solar, you’ll need far more land, all other things being equal. It doesn’t mean that wind is bad and solar is good; it just means they have different requirements that should be part of the conversation.

Question #5: How much is this going to cost?

The reason the world emits so much greenhouse gas is that as long as you ignore the long-term damage they do, our current energy technologies are the cheapest ones available. Moving our immense energy economy from “dirty,” carbon-emitting technologies to ones with zero emissions will cost something. How much? In some cases, we can price the difference directly. If we have a dirty source and a clean source of the same thing, then we can just compare the price.

Most zero-carbon solutions are more expensive than their fossil-fuel counterparts. In part, that’s because the prices of fossil fuels don’t reflect the environmental damage they inflict. These additional costs are what I call Green Premiums. There isn’t one single Green Premium;  there are many: some for electricity, others for various fuels, others for cement and so on. The size of the Green Premium depends on what you’re replacing and what you’re replacing it with.

Here’s an example of how Green Premiums work in practice.

The average retail price for a gallon of jet fuel in the US over the past few years is $2.22. Advanced biofuels for jets, to the extent they’re available, cost on average $5.35 per gallon. The Green Premium for zero-carbon fuel  is the difference between these two prices, which is $3.13. That’s a premium of more than 140 percent.

In rare cases, a Green Premium can be negative — that is, going green can be cheaper than sticking with fossil fuels. For instance, depending on where you live, you may be able to replace your natural gas furnace and air conditioner with an electric heat pump. In Oakland, California, doing this will save you 14 percent on your heating and cooling costs, while in Houston, Texas, the savings amount to 17 percent.

You might think that a technology with a negative Green Premium would already have been adopted around the world, but there is usually a lag between the introduction of a new technology and its being deployed — particularly for something like home furnaces, which we don’t replace often.

Once you’ve figured Green Premiums for the big zero-carbon options, you can start having serious conversations about trade-offs. Will we buy advanced biofuels that are twice as expensive as jet fuel? Will we buy green cement that costs twice as much as the conventional stuff?

I mean “we” in the global sense. You can imagine Green Premiums high enough that the US is willing and able to pay but India, China, Nigeria, and Mexico are not. We need the premiums to be so low that everyone will decarbonize.

Admittedly, Green Premiums are a moving target. What’s more important than the specific prices is knowing whether a given green technology is close to being as cheap as its fossil-fuel counterpart and, for the ones that aren’t close, thinking about how innovation might bring their prices down.

Green Premiums are a fantastic lens for making decisions. Looking at all the different premiums, we can decide which zero-carbon solutions we should deploy now and where we should pursue breakthroughs because the clean alternatives aren’t cheap enough.

There’s one last benefit to the Green Premium concept: It can act as a measurement system that shows us the progress we’re making toward stopping climate change. They give us a different insight from the raw number of emissions, which shows us how far we are from zero but don’t tell us how hard it will be to get there.

What would it cost to use the zero-carbon tools we have now? Which innovations will make the biggest impact on emissions? The Green Premiums answer these questions, measuring the cost of getting to zero, sector by sector, and highlighting where we need to innovate.

Excerpted with permission from the new book How to Avoid a Climate Disaster: The Solutions We Have and The Breakthroughs We Need by Bill Gates. Published by Alfred A. Knopf, an imprint of the Knopf Doubleday Publishing Group, a division of Penguin Random House, LLC. Copyright © 2021 by Bill Gates.

Watch this TED-Ed lesson about the myth of the boiling frog here:

Bill Gates is co-chair of the Bill & Melinda Gates Foundation and founder of Breakthrough Energy. In 1975, Bill Gates founded Microsoft with Paul Allen and led the company to become the worldwide leader in business and personal software and services. In 2008, Bill transitioned to focus full-time on his foundation’s work to expand opportunity to the world’s most disadvantaged people. Along with co-chair Melinda Gates, he leads the foundation’s development of strategies and sets the overall direction of the organization. At Breakthrough Energy, he’s putting his experience as an innovator and problem-solver to work to address climate change by supporting the next generation of entrepreneurs, big thinkers, and clean technologies. Bill uses his experience partnering with global leaders across sectors to help drive the policy, market, and technological changes required for a clean energy transition. In 2010, Bill, Melinda, and Warren Buffett founded the Giving Pledge, an effort to encourage the wealthiest families and individuals to publicly commit more than half of their wealth to philanthropic causes and charitable organizations during their lifetime or in their will.