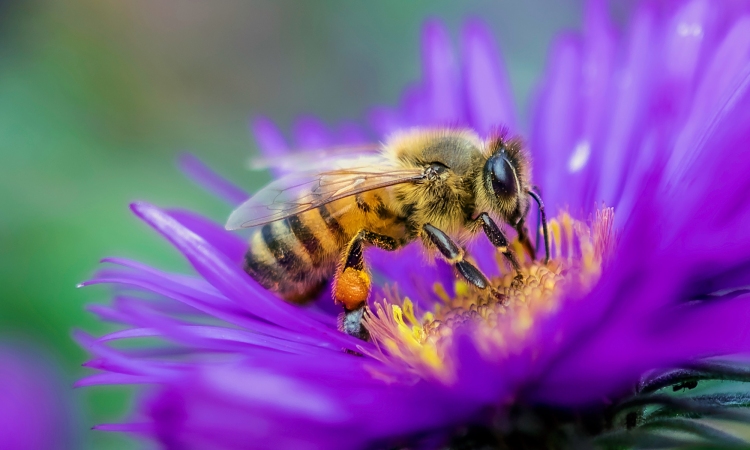 Most people know bees for two things: their sweetness (in the form of honey) or their stings. But they’re so much more than that. Honeybees, for example, live in highly structured social groups where each bee has a role to play. Some bees are solitary and can chew holes in wood. Others can be blue or white or green. In fact, there are more than 20,000 species of bees worldwide.

Importantly for humans, bees are crucial to our planetary health and survival — as pollinators, they are responsible for about a third of the food we eat. Yet bee populations worldwide are declining, largely due to climate change. Carbon emissions are resulting in temperature extremes that are causing habitat loss, a rise in parasitic mites and predators that thrive in warmer temperatures, and increased pesticide use to deal with these new pests. All of these factors impact bees in both big ways (colony collapse disorder) and small (shifting winds make bees less efficient).

Here are 8 surprising facts you didn’t know about these amazing insects, and how you can help protect them.

Bees put the honey in honeymoon

There may be more than 20,000 bee species, but only members of the genus Apis (11 known species) make honey. We may owe bees — and ancient Norse drinking habits — for the term “honeymoon.” The syrupy sweetener was an ingredient in the earliest known alcoholic beverages, including mead, a fermented honey drink. Mead played an important role in Nordic marriage rites as early as the 5th century. It’s believed that it was a tradition for newlywed couples to consume copious amounts of mead during the first full moon cycle, or month, of marriage. The practice is one of several proposed origins of the honeymoon’s etymology.

Some bee species defend their hives with giant balls of heat

Like all insects, bees are cold-blooded, which means their body temperature is typically similar to their surrounding environment. But within the hive, where the developing brood lives, bees maintain a steady temperature of around 92-93 degrees Fahrenheit year-round. Using their wings, bees can fan hot air out of the hive to cool an area or vibrate their flight muscles to heat it.

As a changing climate brings new predators their way, some bee species have taken their thermoregulation abilities to the next level. Scientists have observed Japanese honeybees pounce on the hive-invading, bee-eating Asian giant hornets (also known as murder hornets) that cross their threshold. Together they create a giant ball around the hornet and use the same hive-heating techniques to cook the invader alive.

Bees are highly efficient pollinators and are essential to plant diversity. When bees are employed to pollinate crops such as avocados, blueberries and cucumbers, fruit yields and weight increase dramatically compared to crops grown in the absence of bees or other pollinators. But climate change could threaten our food systems.

As weather patterns continue to shift, many animal species will move to more ideal climate conditions when their previous habitats become less favorable. But experts fear that bees aren’t adapting to shifting temperatures like some other species, which could lead to rapid population decline. In some areas, flowers are also starting to bloom earlier with warming temperatures, and it’s unclear how bees will adapt to these seasonal changes. This could spell big trouble for both wild and farmed crops. “With the declining numbers of bees, the cost of over 130 fruit and vegetable plants that we rely on for food is going up in price,” says Noah Wilson-Rich, biologist and CEO of Best Bees, in his TEDxBoston Talk.

There are bees that can age backwards — really

Some honeybees have the remarkable ability to age in reverse. When there’s a lack of young worker bees, older bees can revert to their more energetic, younger selves to take on the task. In fact, these bees end up living longer to pick up the slack. This incredible phenomenon is currently under investigation by researchers to better understand the underlying mechanisms and potential applications for age-related dementia in humans.

Criminologists developed a statistical technique called geographic profiling (GP) in order to study repeat-offense crimes, like serial killings and burglaries. Based on the locations of the crimes, police can make educated guesses about where a suspect might live or visit regularly. That’s because in general, repeat offenders avoid committing crimes close to where they live so they can avoid detection — but they remain close enough to home for convenience. It turns out bees’ feeding patterns are similar.

Bees avoid detection by predators and parasites by creating a distraction zone — they leave flowers closest to their nest entrance untouched and feed further away from the hive. In 2008, a team of researchers observed bees visiting different flowers, and attempted to locate their hive based on existing GP techniques. They found that bees’ foraging patterns were as reliable and predictable as humans. Criminology experts can now use insights from bee patterns to refine geographic profiling methods.

Honeybees live according to a strict hierarchy

There are three types of honeybees: queens, workers and drones. There’s only one queen, and she’s typically the largest and longest-living individual within a hive. Worker bees are all female and the only bees with stingers. When a bee stings, it dies, leaving behind a banana-like scent that warns the other worker bees of danger. And while workers are genetically identical to the queen, only the crown can lay eggs. In fact, queen bees can release over 1,000 eggs each day for years. These eggs are fertilized with sperm from dozens of male drones whose only function is to fertilize the queen during a once-in-a-lifetime mating flight (the drones die after mating.)

Bees may have brains the size of poppy seeds, but they’re able to pick out individual features on human faces and recognize them during repeat interactions. In one study, scientists paired images of human faces with sugar-laced water and found that bees recognized and remembered faces associated with the sweet reward — even when the reward was absent. This keen perception not only helps these highly social creatures recognize each other, but it also helps them recognize and return to flowers that produce more pollen.

Fortunately, you can take action to help bees where you live. With just a smartphone and a willingness to learn, you can contribute to various citizen science projects. A citizen science effort in Michigan, for example, helped researchers discover that special ground-dwelling bees that pollinate squash and pumpkin fare better on farms where the soil is not trampled or tilled — this finding has real implications for our food systems. Other ongoing programs help researchers collect baseline data on wild bee populations, including North America-based BeeBlitzes, the University of Illinois’ BeeSpotter, Australia’s Wild Pollinator Count and Canada’s Bumble Bee Watch.

Your own backyard is another place to start. Plant more wildflowers, don’t use pesticides that harm bees and apply them before flowering begins. If you live in the city, set up or join a community rooftop garden. Interestingly, bees can have higher survival rates and produce more honey in the city compared to the crop-dotted countryside, Wilson-Rich says. And, if you want to really get in on the buzz, consider keeping your own honeybee hive — you’ll bolster your local bee population and reap some sweet rewards.

What is it about bees? Three experts on why they’re fascinating, why they’re dying, what can save them