When Dustin Yellin was eight years old, he buried a dollar bill, a pen and a fork inside a box, with the specific idea that aliens might find it in the future. It’s unclear what he hoped might happen then or, indeed, what happened to the box, but it did start Yellin on an artistic journey of discovery in which he still merrily makes boxes. It’s just that these days some of them are very, very big (hi there, Pioneer Works). Take a spin through the work and mind of a singular artist.

The day a bumble bee changed everything

On a trip to Hawaii, Yellin made a collage for his mother by ripping up a dictionary and turning it into what he calls “a sort of Agnes Martin grid.” He poured resin on the canvas … and then a bee got stuck in it. Yellin’s mom? Allergic to bees. “So I poured more resin on the canvas, thinking I could hide it or something,” he says. “Instead the opposite thing happened; it created a magnification on the dictionary text.”

How resin became a material of choice

For Yellin, this bee blip was the beginning of a brand-new artistic journey as he began to experiment with resin as a material. “I invented my own taxonomy of invented specimens,” he says. “First botanical, then I made some weird insects and creatures. It was really fun; I was just drawing on the layers of resin.”

“At some point I got up to the human form — lifesize resin sculptures with drawings of humans inside the layers,” says Yellin. “This was great except for one thing: I was going to die.” Turns out, resin is a terrible material to work with, and breathing its toxic fumes on a daily basis — even in the name of art — was a super-bad idea.

The next best material: glass

In order to not die, Yellin started experimenting with drawing on layers of glass to make a three-dimensional composition. Luckily enough, it was possible and looked beautiful, meaning that he could stop using the resin.

For an ongoing project, Psychogeographies, Yellin is building 100 glass sculptures of humanesque creatures. Each sculpture is huge — and enormously heavy. “Each one is a 3000-pound microscope slide with a human stuck inside,” he says.

The pieces are bold, bright, intricate and ornate. It’s still possible to see the individual layers of glass, which means that each new angle provides a new way of looking at the sculpture.

Each sculpture is made from ripped-up media: encyclopedias, dictionaries, magazines and so on. “Each one acts as an archive in the shape of human,” says Yellin.

So what is the collective noun for ginormous glass sculptures?

The sculptures are shown in groups. “They’re like cells; they come together and divide,” says Yellin. By walking through and around the sculptures, visitors can explore all the different views of the weird creatures inside.

What do you do when a 3,000-pound sculpture isn’t enough? Build one that weighs 24,000 pounds, obviously

Having settled on using glass as his material of choice, Yellin upped his own stakes by building this vast triptych. It weighs 24,000 pounds and, while it’s 18 feet long, the images wrap around both sides of the sculpture, meaning that there’s a total of 36 feet of visible imagery. “It’s weird,” admits Yellin unapologetically.

Yellin, who works in Brooklyn’s Red Hook neighborhood, says he was inspired to create the giant glass work by the Hieronymus Bosch painting The Garden of Earthly Delights, on show at the Prado Museum in Spain. Evil, chaos and religion certainly feature; shown here? The blood fountain, Jesus and the locusts.

Trying to understand is perhaps a futile exercise

“This is where the animal-headed creatures are by the lighthouse and they’re all about to commit mass suicide into the ocean,” says Yellin, who chuckles at the impossibility of any kind of sane interpretation of the piece.

The things you’ll find in the ocean these days

“There’s all sorts of things you can find if you look really hard in the ocean,” says Yellin happily. “This is a lady creature coming out of the ocean, spitting oil into one hand; she has clouds coming out of her other hand. Her hands are like scales; she’s the mythological reference of Earth and cosmos in balance.”

“When you go to the other side [of the triptych] she has a trunk, a bird’s beak, she’s spitting clouds out of trunk,” says Yellin, who clearly delights in the absurdity of the worlds he creates. “She has an 18-foot-long serpent’s tail that connects the triptych; her tail catches on fire from the back of the volcano. I don’t know why that happens, but that happens, you know.” 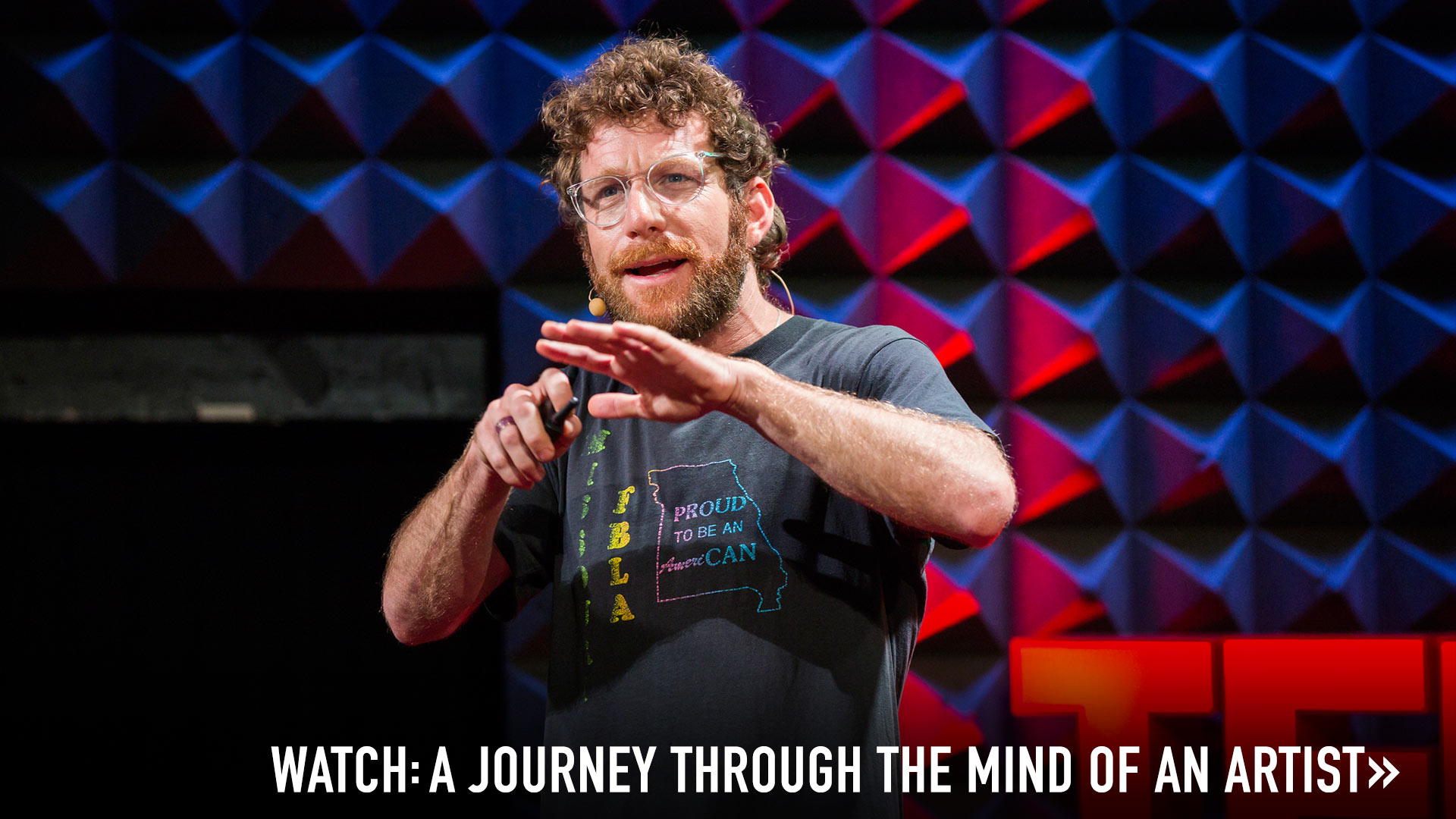 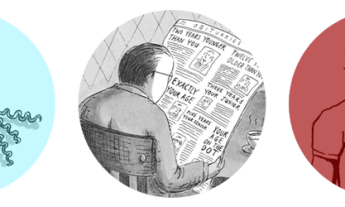