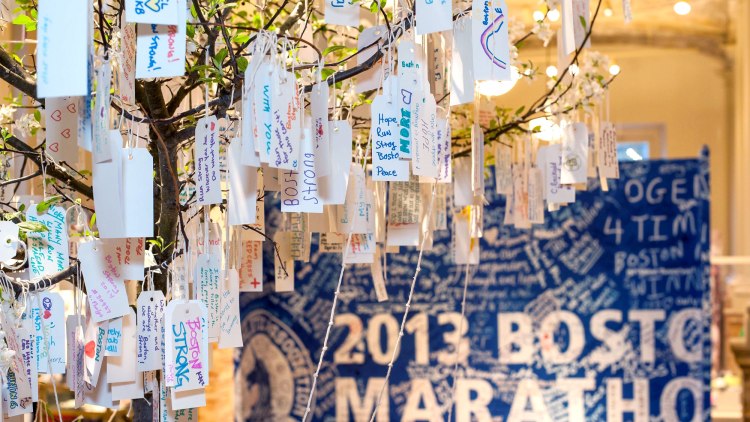 How does a city rebuild after unthinkable tragedy? Culture can help, as curator Rainey Tisdale showed in an exhibition after the 2013 Boston Marathon bombing.

The bombings near the finish line of the 2013 Boston Marathon left a city traumatized. The bleachers on Boylston Street long associated with delight and celebration became a roped-off murder scene. And when people were again allowed to walk down Boylston, they brought offerings. Notes, hats and T-shirts, artwork, stuffed animals, 134 boxes of running shoes … all in tribute to those who were murdered and injured, and to the first responders who saved lives.

How to make sense of all these tributes? One idea: to turn the artifacts into an exhibit that reflects back on the community that created it. Curator Rainey Tisdale (TEDx Talk: Our year of mourning) pulled together the exhibit “Dear Boston” from items left behind at the bombing scene. For Tisdale, the show, housed at the main branch of the Boston Public Library, crystalized three ideas of how cities can use culture to deal with the worst things that can happen to them.

Culture can confer dignity. When a city’s resiliency is compromised, it makes people feel less than whole. They can feel beaten down, uncertain about the future, unsure they’ll get what they need to thrive. As legendary urban thinker Jane Jacobs noted, people don’t want to live in an undignified place. Not only can culture acknowledge that feeling and help people out of it, it can pull a neighborhood together to help build an environment that isn’t worrisome or scary. In Tisdale’s Marathon exhibit, even the most mundane notes left either at the scene or at the exhibit — “Feel Better,” or “Nashville believes in Boston” — showed people, as she puts it, “grasping for common language, trying to fill the hole in the city with what they leave behind.” At the end of the show, Tisdale and her team planted four trees and asked visitors to hang messages on them detailing their hopes for the future. One of the notes directed to survivor families came from the family of Jesus Sanchez, who died on United Flight 175 as part of the September 11 attacks: “We’ve been where you are. We know how you feel. We feel your pain. We understand.” The trees are beacons of ongoing empathy, hope and human connection.

Cultural spaces can provide much-needed sanctuary for reflection of all kinds. Mental health workers use the term “holding environments” to describe a safe space (figurative or literal) where recovery, reflection and growth can happen. Cultural spaces can be places where you can process what you’re experiencing — or give you a break from whatever’s pressing in on you. Tisdale points to the courtyard of Boston’s Isabella Stewart Gardner Museum as a place she gravitated to after the bombing. There, she soaked in the quiet light, open space, elegant plantings and carefully placed sculptures. “The courtyard is an amazing space for lots of different kinds of reflective, restorative uses,” says Tisdale. Public parks and open green spaces offer a similar function.

Beauty doesn’t have to be expensive — and even a little beauty can elevate a community. More important, beauty isn’t a nice-to-have, it’s a must-have. Tisdale cites Chicago-based social artist Theaster Gates’ dictum that “beauty is a basic service,” saying: “Arts and culture can be catalysts for resilience on multiple levels. People don’t deserve just food and water and a roof over their heads. The work of a city is not done until everyone’s full needs are met — not just hard needs but also the dignity of beauty, meaning, and connection.” Indeed, beauty can be tremendous contributors to any plan to make cities more resilient.

In Tisdale’s own exhibit, she and her fellow curators thought carefully about how to place the artifacts to create not only an important record, but also a beautiful, reflective space open to interpretation. How to present 134 pairs of running shoes? Stacked heel over toe in a wave, their open mouths almost speaking.

Jimmy Guterman is editorial director of Collective Next and a curator of TEDxBoston. He spoke at TED-U in 2008 and at TED2012. 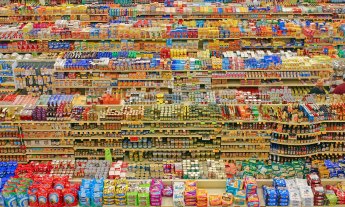 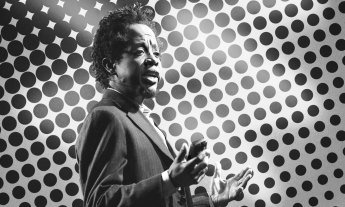 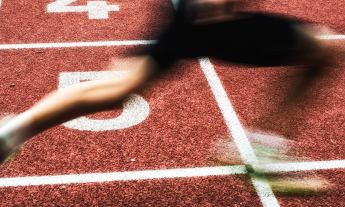 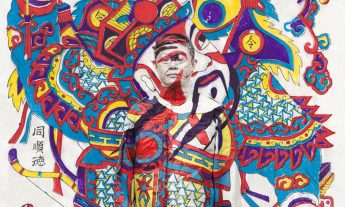