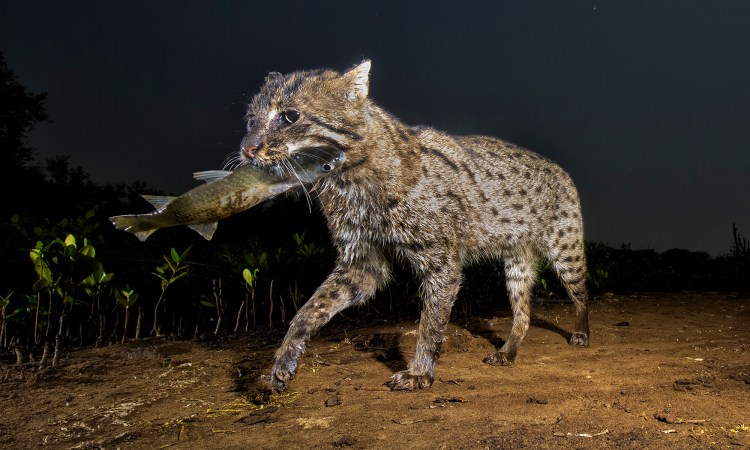 It’s a fact: Dangle a cat video in front of almost anyone, and they’ll drop everything to watch it.

It’s something that conservationist and entrepreneur Ashwin Naidu is counting on. He is hoping that fishing cats — little-known, endangered, wetland-dwelling felines like the one shown above — grab our attention and galvanize us caring about their habitats — the fast-disappearing but ecologically valuable mangrove forest habitats.

Here, Naidu — CEO of the Fishing Cat Conservancy and a TED Fellow — shares why fishing cats and mangroves forests are so important to our planet — and his organization’s ambitious plans to save them both.

Introducing the fishing cat. It’s kind of like a tiger, but weighing an average of 20 pounds (or 9 kilos), it’s a whole lot smaller. It’s also incredibly shy.

The elusive fishing cat is, as far as researchers know, one of the the world’s only wild cats that is specifically adapted to wetland environments. In addition to hunting fish, these cats also prey on reptiles, amphibians, aquatic birds and other small animals. While it’s not yet well documented, fishing cats are thought to lure fish by gently touching the water’s surface to imitate landing insects.

Living primarily in the waterlogged wetlands and mangrove forests of South and Southeast Asia, they’re agile swimmers (unlike most cats). Their paws are partially webbed to help them propel through the water and for prowling on muddy, marshy land.

Their solitary, nocturnal lives make them difficult for humans to spot in the wild, so not much is known about their behavior. Maybe that’s why they’re one of the least understood of the world’s wild cats.  Since the 1800s, only a handful of detailed scientific studies have been published about them, several based on fishing cats in captivity).

Like tigers and leopards, fishing cats have striking patterns on their fur. But unlike their charismatic Asiatic cousins, they might be even more endangered due to the low awareness about them and the rapid loss of the intact wetlands and mangrove forests where they live. Fishing cats are currently classified as “Vulnerable” on the IUCN Red List, with population decreasing.

You might ask: If they’re at least as endangered as tigers, why haven’t you heard of them?  Naidu thinks that’s a good question, and in fact, he wants to make this little cat just as popular as the big one. “I am a believer that all lives have equal intrinsic value — so why can’t we use fishing cats as a flagship species to protect and restore some of the most valuable ecosystems on the planet?” he says.

Naidu started his career as a wildlife biologist in India by studying tigers and leopards, then moved to the US to study mountain lions and bobcats. “I started digging around to find out what were some of the lesser-known cat species,” he recalls. “When I discovered the fishing cat, I thought, cool, let’s go explore them, as they’re understudied.”

During his research, Naidu suddenly realized that conservation of this cat depended entirely on the conservation of the complex ecosystems they lived in — the mangrove forests — and the people who live next to them.

Mangroves are invaluable to the earth — ecologically and economically. Mangrove forests grow on coastlines at the junction between fresh and saltwater. Their uniquely shaped roots pack the soil around them, fortifying coastlines against erosion, storms and tsunamis. Their forests also provide habitat for a rich array of biodiversity — birds, snakes, mudskippers, marine mammals and fish — making them a valuable natural resource.

“I learned that mangroves truly are one of the most valuable ecosystems for the planet and critical to the well-being of the people who live in and near them for protection, food and natural resources,” says Naidu.

These unusual coastal forests also do an amazingly good job at sequestering carbon. Even though they cover fewer than 54,000 square miles (or 140,000 square kilometers) of our planet, mangroves can sequester at least four times more carbon per unit area than rainforests and upland forests can. Plus, according to Naidu, “the carbon sequestered in the soil beneath the trees is not released back out to the atmosphere very easily, so they really are excellent carbon sinks and stores.”

Unfortunately, there’s bad news: More than half of the world’s mangrove forests have been destroyed, putting fishing cats and many other species at risk. And the rest are being overexploited. The primary driver of deforestation is aquaculture — farming fish, shrimp and other seafood — to satisfy public demand. “Go to any regular grocery store, and pick up a package of fish or shrimp. It’ll often say ‘farm-raised in India, Thailand, Indonesia, Sri Lanka’ or some other country that probably has mangroves,” says Naidu.

Aquaculture is so popular in and near mangroves, because the waters contain the correct level of salinity and they’re rich in organic nutrients. They’re also naturally sheltered environments. But aquaculture farming doesn’t last. The system is profitable for just about four to five years, says Naidu. “The yield drops after a certain point due to chemical accumulation. So the farmers abandon unproductive aquaculture ponds and deforest more mangroves elsewhere to start new ponds.”

Because of aquaculture runoff, the people who rely on the local wild fish end up losing their source of income or food. “Nutrients from shrimp feed, chemicals such as antibiotics, and other pollutants accumulate in the ponds, polluting the fish stock in the surrounding area,” says Naidu.

To stop deforestation and restore mangroves, the Fishing Cat Conservancy (FishCat) is partnering with aquaculture farmers. For the last six years, the FishCat has been working with local residents on fishing cat and mangrove conservation. It began by enlisting people to serve as field surveyors to set up wildlife cameras and help monitor and study fishing cats and other local species. It’s also brought education programs to villages, and now its focus is encouraging aquaculture farmers to switch from their destructive livelihood to sustainable forest-based livelihoods, such as raising mangrove crabs and beekeeping (apiculture) to produce honey and beeswax candles.

When the farmers give up aquaculture, this allows mangroves the chance to regenerate — something that takes a relatively fast three to five years (it can take decades or longer for other kinds of forest to recover to the point where native species return).

“In the three to five years that it takes to restore a mangrove forest, landowners and farmers can work to naturally harvest fish, shrimp, crabs and honey,” says Naidu. The FishCat is currently piloting a mangrove crab program that lets farmers try raising mangrove crabs, which is a sustainable substitute for aquaculture ponds.

To help ensure that mangrove crabs are profitable for farmers, the FishCat recently partnered with Monterey Bay Aquarium’s Seafood Watch Program to build further partnerships and develop a mangrove-forest-to-restaurant supply chain. Naidu hopes targeting eco-conscious restaurants and consumers will introduce them to delicious mangrove seafood, while restoring wetlands and providing people with decent, sustainable livelihoods. This revenue should also deepen the incentive of former farmers to make a living by selling mud crabs or wild-caught fish. “I’d like to write on high-end restaurant menus, ‘By eating this crab or fish, you are reforesting this land’, so the consumer becomes a participant in the solution to this global problem,” he says.

The ultimate vision: Making it easy for philanthropists and global citizens to invest in mangrove reforestation. “To make the three-to-five year transition from aquaculture to sustainable forest-based livelihoods, landowners need income security,” says Naidu. At the moment, FishCat is asking donors to adopt the lands of the farmers that the organization already partners with. To date, their work covers around 50+ acres of land managed by villages and farmers in India and 33+ acres in Sri Lanka. Destiny Saucedo, program manager at FishCat, is working to build additional relationships with land partners, especially with private land owners in Sri Lanka.

That’s just the start. “Ultimately, we want to be able to restore a million or more acres of mangroves and inland forests, provide 100,000 families with carbon-negative livelihoods, and protect 10,000 or more fishing cats in the process so they’ll no longer be endangered,” says Naidu. He says that the FishCat has gathered data which shows this plan could work. The key, he says, will be incentivizing people to work with landowners so they’ll have all the support and guidance they need.

Enter the FishCat app: kind of like an Uber for mangrove restoration. “We’re currently designing an app that lets people invest in mangrove regeneration via a financial mechanism we’re calling the Tsunami Legacy Fund, which we hope to launch within a year,” says Naidu. “Through the app, investors can adopt a location that they want to help restore. Then they’ll donate a minimum of $100 for every 100 square feet.” This amount will be used by FishCat to set up agreements with land partners to incentivize their land restoration and reforestation for at least 3 to 5 years.

Meanwhile, investors can monitor the forest’s regeneration via satellite updates and cameras on the ground, and they’ll be invited to Earth Camps, where they can participate in conservation activities. To demonstrate this concept, FishCat recently launched the FishCat ReShirt — a T-shirt with a QR code which, when scanned, links to the locations that they are reforesting.

Back to that adorable cat though — just how far can Naidu take his strategy to use fishing cats to help save this invaluable ecosystem? “What if we could restore the earth’s most valuable ecosystems and make conservation a sustainable, well-paid livelihood?” he asks. “Our idea is to push this as far as possible. Let’s work together to protect endangered species like fishing cats, and empower global communities to help solve deforestation, extinction and climate change.”

Learn how you can support FishCat’s mission — and help support their development of an app — by visiting the FishCat website.