Gallery: A love letter to the planet

Ask photojournalists to name a peer they admire, and Sebastião Salgado’s name is sure to crop up. The Brazilian is renowned for the long-term projects he undertakes, devoting years at a time to documenting the story of a particular people or the evolution of a certain place. As he describes in the talk he gave at TED2013, his attention to detail and his personal attachment to his subjects caused health problems that nearly killed him.

Thankfully, he didn’t give up. His most recent project is Genesis, which he describes as “my love letter to the planet” and for which he spent eight years traveling the world to photograph humans, animals and nature in their native glory. (To read more details about Salgado’s process, see this rather lovely Q&A with TED photographer Ryan Lash.) The resulting black-and-white images include the astonishing shot, above, of a Southern right whale, which he photographed in the Valdés Peninsula in Argentina in 2004. Together, the series forms the focus of a book (including a vast, two-volume edition that costs $9,000 and comes complete with a wooden stand designed by the Japanese architect Tadao Ando; mere mortals can pick up a hardcover version for $69.99). There’s also a documentary, Shade and Light, filmed by Salgado’s son and Wim Wenders, and exhibitions in cities around the world.

The scale is appropriate. This is truly breathtaking work. And, for all that the scenes Salgado captures will likely feel alien to most of us, the images are imbued with no less than the spirit of humanity. If that sounds overblown, seriously, check these out: 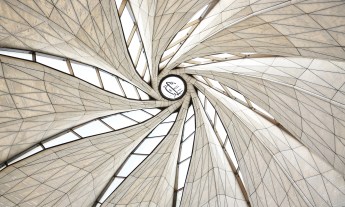