Pollution is a blight, right? Not so fast, says architect Jorge Otero-Pailos, whose projects invite us to consider the important history lessons provided by layer upon layer of dirt.

We tend to think of pollution and the atmosphere as two different creatures that have come together in a wicked embrace. We dream of a technology so powerful that it can vacuum away dirt, leaving the air unsullied. But that will never happen, says Jorge Otero-Pailos, an artist, architect and preservationist. Pollution and the atmosphere are inseparable. The same particles that ancient Roman industry spewed are still with us — and will be around long after the Coliseum crumbles. Pollution, Otero-Pailos believes, is “our cultural legacy,” a monument as eloquent as the great works it blackens.

This provocative idea is played out in his ongoing art series The Ethics of Dust. For each project, Otero-Pailos, a Spaniard who directs the preservation program at Columbia Graduate School of Architecture, Planning and Preservation in New York City, paints a wall of a historically important building with latex and peels away the skin. Years of dirt are trapped in translucent golden sheets, which the artist displays alongside the cleaned surface. The series title comes from the Victorian art critic John Ruskin, who saw in dust not just chaotic dissolution but also matter poised to coalesce into rock. How, Otero-Pailos asks, do we decide which creative works are substantial or insignificant? Intentional or happenstance? Worth keeping or disposing? And what are the consequences of those choices? We dug in.

How to rethink the role of the preservationist. It is generally assumed that while artists and architects bring new objects into the world, preservationists and conservators busy themselves with existing objects, smoothing over the traces of interventions. They consider themselves technicians, not creators. Not Otero-Pailos. “For me that is a bit of a loss,” he says. “What has resulted is a very narrow definition of creativity. I think of creativity as an unexpected response to an existing reality.”

An example of such a response was the controversy attending the decade-long cleaning of the Sistine Chapel ceiling that was completed in 1990. Among the features removed with a layer of dirt were pupils in the eyes of many of Michelangelo’s figures, which had been added by later restorers, resulting in unsettling-looking blank stares. Otero-Pailos had been researching the radical nature of cleaning when he was invited to participate in the 2008 Manifesta European Art Biennial in Bolzano, Italy. In particular he was looking for a way to remove dust from an object while keeping the deposit’s form and decided to use this idea as his installation. “There are many different ways to clean a building — scrubbing, power washing,” he said. “But there’s a history of people using compresses such as mud or papier-mâché.” With latex he found a cleaning material that recalled the German-born American artist Eva Hesse’s delicate sculptures, while the casting process was reminiscent of architectural works by the British artist Rachel Whiteread. So, for Manifesta, he slathered the stuff on a wall in the dusty machine hall of Mussolini’s 1937 Alumix aluminum factory in Bolzano. The 175 golden, speckled panels that came out of the experiment were “like a proof of concept,” he recalls.

Rethink the monument as möbius strip. Where does a creative object begin and end? Otero-Pailos likes the complications of boundaries. Consider the Doge’s Palace, the 15th-century tourist magnet on St. Mark’s Square in Venice. “When you look at the exterior colonnade, most of what you’re looking at are 19th century copies of the original,” he says. Genuine artifacts from the building are squirreled away in a museum within the palace. Even though we think of the Doge’s Palace as a coherent object, “the more you scratch, the more you see that the various pieces have drifted away.”  For the 53rd Venice Art Biennale in 2009, he cast an interior wall of the Doge’s Palace that had managed to avoid being scrubbed. Pointing out that the accumulated grime was as integral to the palace in its way as the original colonnade, he proposed donating the cast; after all, he said, if pollution is “not part of the building then what is it part of?” The offer was turned down.

Visualize the atmosphere as an object. Otero-Pailos didn’t set out with an environmental agenda, but found that in effect this project was one of “taking casts of the atmosphere.” In 2013, he cleaned a first century Roman silver mine in what is now Cartagena in southeastern Spain. Two decades earlier, European scientists, drilling in Greenland to analyze the history of the atmosphere written in layers of sediment, had discovered pollution there that came from that very mine. This more than anything drove Otero-Pailos to understand that the record pollution inscribes is more indelible than any building. And though he is interested in pollution as a monument — a piece of culture that forms a bridge to the future; an ineradicable sign of who we are long after we’re gone — he is not a fatalist. “We need to manage the atmosphere,” he says, and one way to make the challenge tangible is to visualize it as an object. To think of the atmosphere only as compromised (and cleanable) air is to overlook its, well, substance.

Expose the unseen The largest object at London’s Victoria and Albert Museum is a cast of Trajan’s Column that was too tall ever to be fully assembled. Produced in the 19th century in thin plaster ribbons, its pieces were glued to a pair of Victorian brick chimneys made specifically to support them. No one would have known the utilitarian cylinders were at the core of the bas-reliefs until Otero-Pailos cast one chimney’s dusty brickwork from the inside, making a ghostly impression of the only genuine object in a room of reproductions. Meanwhile, his latest project opened in London in June 2016, in a 900-year-old part of the Houses of Parliament. By coincidence, the 50-meter long piece was unveiled the day after the Brexit vote, in the company of stunned Londoners and bustling MPs. “Disraeli’s dandruff, Cromwell’s skin flakes, John Major’s ancient, coughed-up saliva—it’s all probably here, glued into these giant latex curtains,” a critic for Time Out London wrote in admiration. 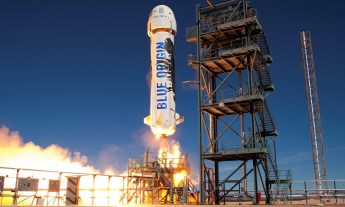 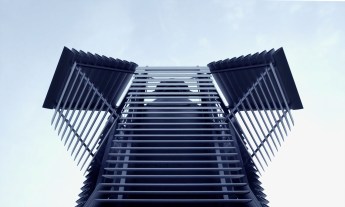