Jimmy Nelson has gone all over the earth to photograph native peoples at their proudest moments and to show you their soul.

“This is us at our best” — that’s the caption that could hover over these images from Dutch photographer Jimmy Nelson (TED talk: Gorgeous portraits of the world’s vanishing people), who works to put the world’s peoples and their rich traditions front and center in his pictures.

“I don’t think there’s anyone else in the world who looks like us or does things the way we do,” says Mucathalepa Tchombo, a 32-year-old Muchimba woman from southwestern Africa, and one of the subjects of Nelson’s work. “I’m very proud of my culture, but the world is changing fast, and we’re part of that too.”

Nelson is keenly aware that customs can vanish in a flash. To document them before they do, he spends months immersing himself in remote communities, connecting with people and really learning about their lives. Later, he returns to share the finished pictures with them. “In some cases, I’m not the first person to have photographed them,” he says. “But, in most cases, I’m the first to return and show them the imagery.”

While Nelson’s images are undeniably beautiful, some critics have accused him of perpetuating stereotypes and “othering” his subjects. But he disagrees. “I think a lot of judgement is based on fear,” he says. “And that’s the antithesis of my project — it’s about trying to break down those barriers and bring the people closer to you.”

Nelson’s new book, Jimmy Nelson: Homage to Humanity, is his latest attempt to showcase the pride, strength and resilience of the people he has come to know; all shown, as he puts it, “standing at their most proud.” The book’s smartphone app lets viewers access 360-degree images and videos, letting readers feel as if they are witnessing these rituals firsthand. “The idea is that the whole world can get access to what’s going on behind the pictures, see who these people really are, and dispel myths about them,” he says. “I want to show you the soul of these people.” 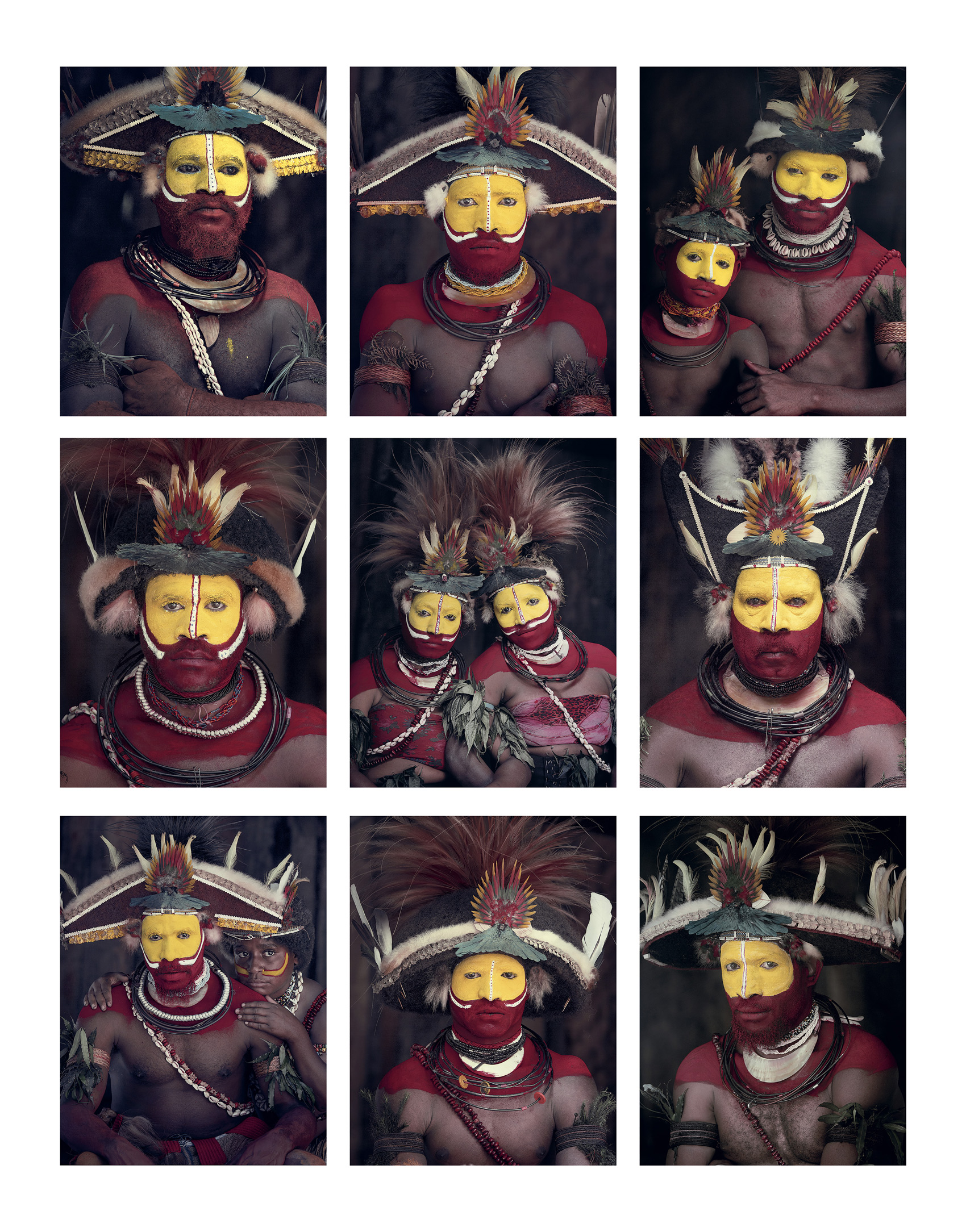 The Huli are believed to have laid down roots in Papua New Guinea as far back as 45,000 years ago. The people shown are from the town of Tari, and many still live according to the traditional ways. “The Huli men are famous for their unique custom of creating and wearing impressive wigs decorated with feathers. They also wear bright facial paint in red, yellow and white — colors originally chosen to strike fear into their enemy in times of conflict,” says Nelson. “Nowadays, they usually wear them to sing and dance.”

The so-called Wigmen make their wigs out of their own hair — yes, that’s right — and weave them with feathers from the island’s 700 bird species. Each feather carries its own symbolic meaning (such as strength and courage). The Huli who participated in Nelson’s photographs did so in the hopes that their portraits will inspire their youth to follow in their elders’ footsteps. But they also want their images to reach people outside their community.

“The forest in which we live is essential to us. It provides for all our needs, it is sacred, and I would do anything in my power to protect it,” writes Mundiya Kepanga, a 53-year-old Huli Wigman, in the foreword to Homage to Humanity. “I hope that by helping people to better understand my culture, they will also respect our environment.”

The nomadic Dolgans roam one of the coldest regions on earth, the tundra of the northern Anabar Republic of Yakutia in Siberia. On a particularly brutal day, the temperature may drop to -76 degrees Fahrenheit. “Dolgan means ‘people who live close to water’ — or, in this case, ice. They live on icy white plains that stretch out as far as the eye can see,” says Nelson.

The herders move every few days to find enough lichen for their reindeer to eat. For maximum efficiency, the Dolgan put everything they need to carry with them — including their homes, which are called balok — on skis. They travel with more than 1,500 animals, including packs of herding dogs and herds of reindeer.

“We Dolgan have been the envy of many people. During perestroika in the 1990s, the reindeer herders were the only ones who were well-fed because the tundra always keeps providing,” says Roman Dimitruvik Tupirin, a 44-year-old Dolgan who was interviewed by Nelson and his team. “Now we’re fearful of losing our connection to nature because people are coming here to hunt for diamonds and oil.”

Buddhism is the most widely practiced religion in Bhutan — an estimated two-thirds to three-quarters of the population are adherents — so the Ngalop people hold a special place in their country. “Ngalop means ‘the first risen,’ and they are known as the people who brought Tibetan Buddhism to Bhutan when they migrated there in the ninth century,” says Nelson. The Ngalop live mainly in the northwest region of the country.

Shown are a group of Ngalop masked dancers. Symbolizing different deities, demons and animals, the masks are used when the Ngalop act out spiritual stories from their collective past. In this photo, they’re dressed for the annual Tshechu festival. “Religious gatherings such as the Tschechu festival are an important way to promote and share cultural heritage between the people from remote villages,” Nelson says. The temple complex seen on the left-hand side of the image is Paro Taktsang or “The Tiger’s Nest.” Located more than 10,000 feet above sea level, it is is one of the most sacred sites in Bhutan. 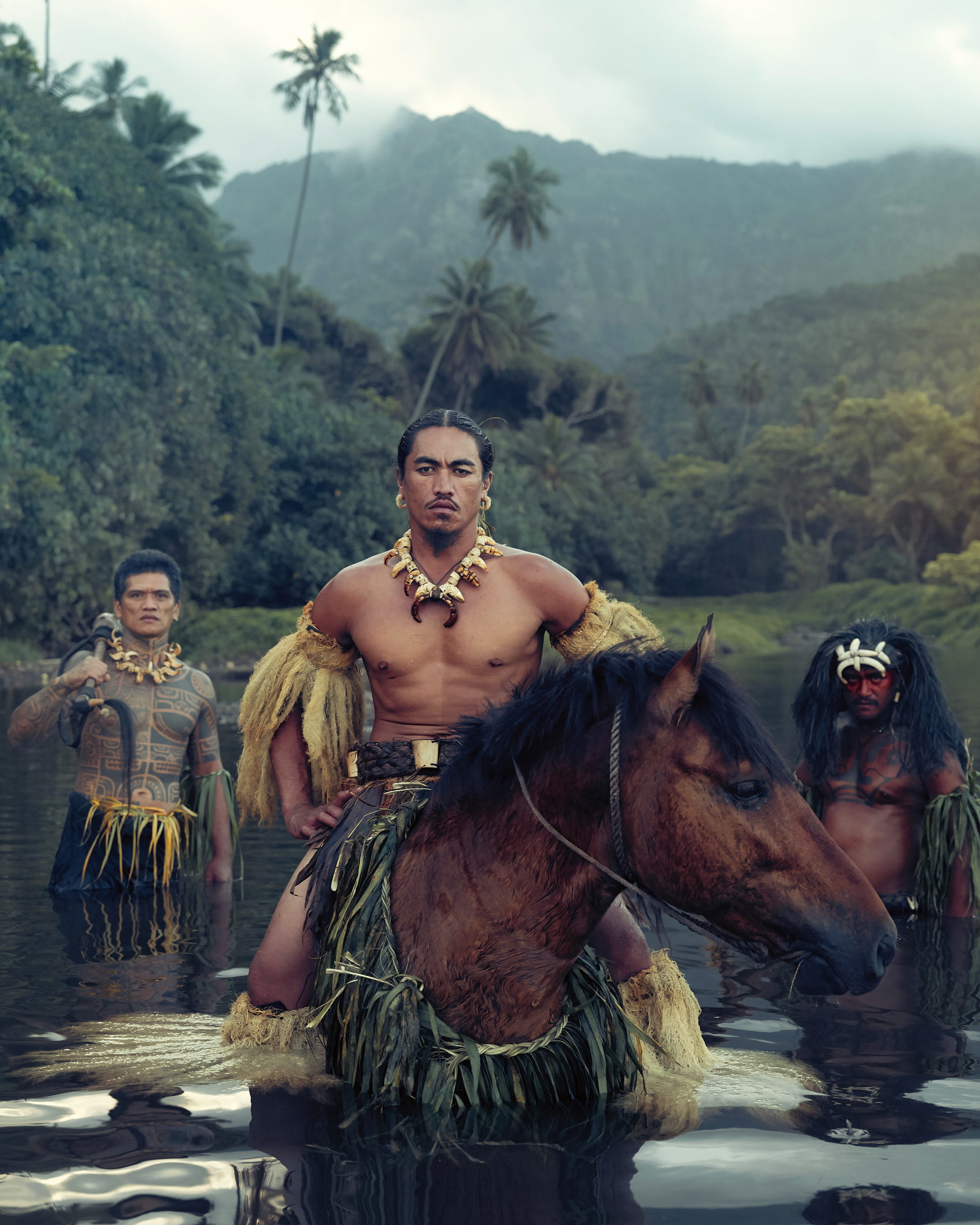 When Captain Cook and his crew arrived at the Marquesas Islands — a volcanic chain in the southern Pacific — in the late 1700s, they were struck by the appearance of the inhabitants. A crew member said they were “the most beautiful … people I ever beheld.” Unfortunately, Cook and co. (and subsequent European settlers) ended up bringing disease and conflict to the people they so admired. In a matter of years, the Marquesan population shrunk from 80,000 to 2,000 — today, the population of the 15 islands totals just over 9,000 people.

“The native inhabitants are known in the local language as Enanaa, meaning ‘people,’” says Nelson. “Traditionally, Marquesans wore clothing made of leaves and grasses that were decorated with animal teeth and beads. Today, their skirts are more likely to be made of cloth.”

Historically, Enanaa had no written alphabet, so tattoos are an important part of their identities. Shapes and symbols enable people to communicate their status and their genealogy. After a child is born, parents start saving money — by raising pigs and growing crops — to pay for their child’s tattoos in adulthood. Getting inked isn’t just a young person’s game; it’s a lifelong pursuit. Subsequent tattoos are earned as people accrue wealth and achieve higher status in their community. Today, even though many Marquesans speak and write French, tattoos are still an important part of their culture. 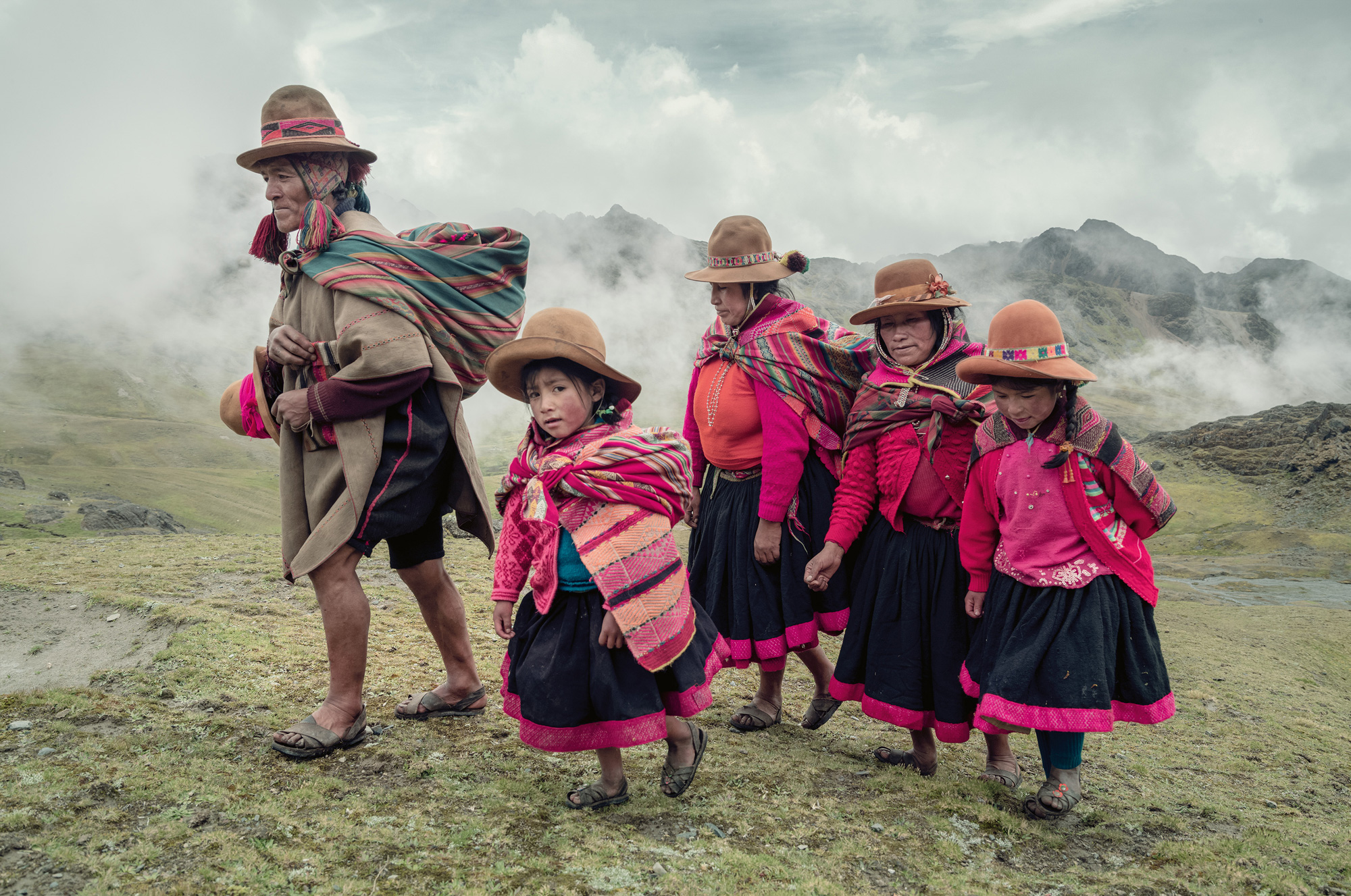 The Inca empire is believed to be the largest pre-European civilization in the Americas, numbering some 10 million. The Q’ero, shown here, are thought to be direct descendants of the Inca, and their 2,000 members live in and around the community of Qochamoqo, located in eastern Peru and perched over 14,000 feet above sea level in the Andes Mountains.

Considered part of the Quechua population group — with whom they share a language — “the Q’ero are one of the most isolated Andean communities, moving with the seasons to live and work at various altitudes, growing potatoes, corn and bamboo,” says Nelson. “They are known for their weaving techniques, with which they make the colorful unkuña carrying cloths.” The cloth is made from a blend of alpaca, sheep and llama wool, and the fabrics’ designs communicate their people’s history and mythology.

Some of the Q’ero’s other traditions aren’t as visible. “We still believe there should always be equal exchange, a sacred reciprocity we call ayni: I do something for you today; you do something for me tomorrow,” says Fredy Flores Machacca, 30, the youngest-ever president of the Q’ero nation, to Nelson. Added Machacca, “We Q’eros live close to nature and we sleep close to the earth. I want to protect it like it protects us. That is ayni.” 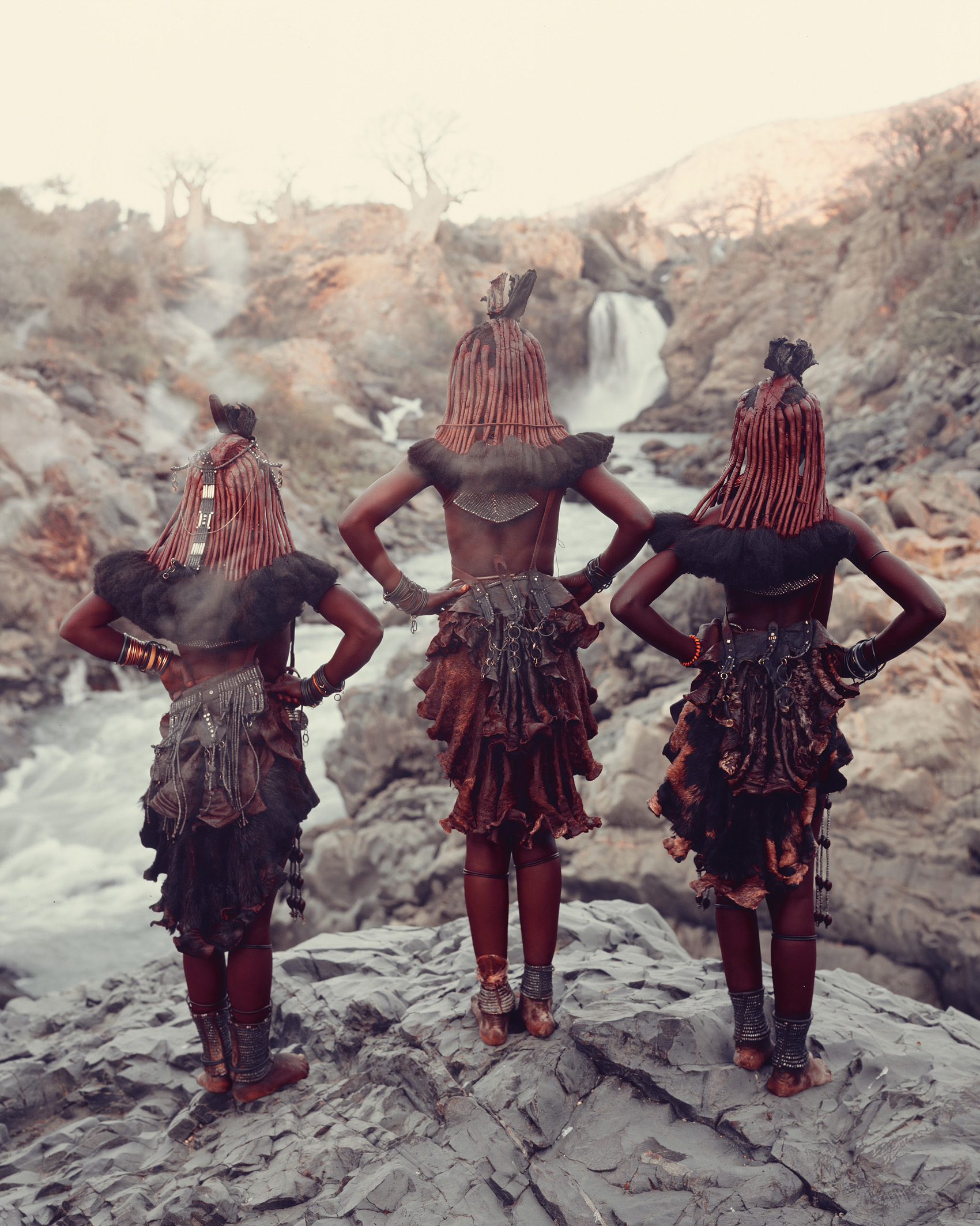 In recent times, the Kaokoveld Plateau in southern Africa has become known for rare minerals such as shattuckite and dioptase. Yet the culture of its native inhabitants — which includes the semi-nomadic Muchimba people — is similarly rich. They spend much of their time along the Cunene River, which is an important resource for them and their herds of cattle and goats, and live in dome-shaped houses made from sticks, clay, straw and cow dung.

Since water is so scarce, the Muchimba reserve it for livestock. To keep clean, says Nelson, “the women cover their skin and hair in a mixture of butterfat and ochre pigment known as otjize, which also protects them from the sun.” Additional bonus: Otjize acts as a moisturizer and insect repellant, too. Only the women wear it — not the men — and they use it in their hair as well. “We rub the wet [ochre] paste into our hair to make long braids. A few times a year, we wash it all out and redo it,” Mucathalepa Tchombo, a Muchimba woman, tells Nelson. “If there’s a special occasion coming up, we put on more ochre. It’s a kind of makeup. 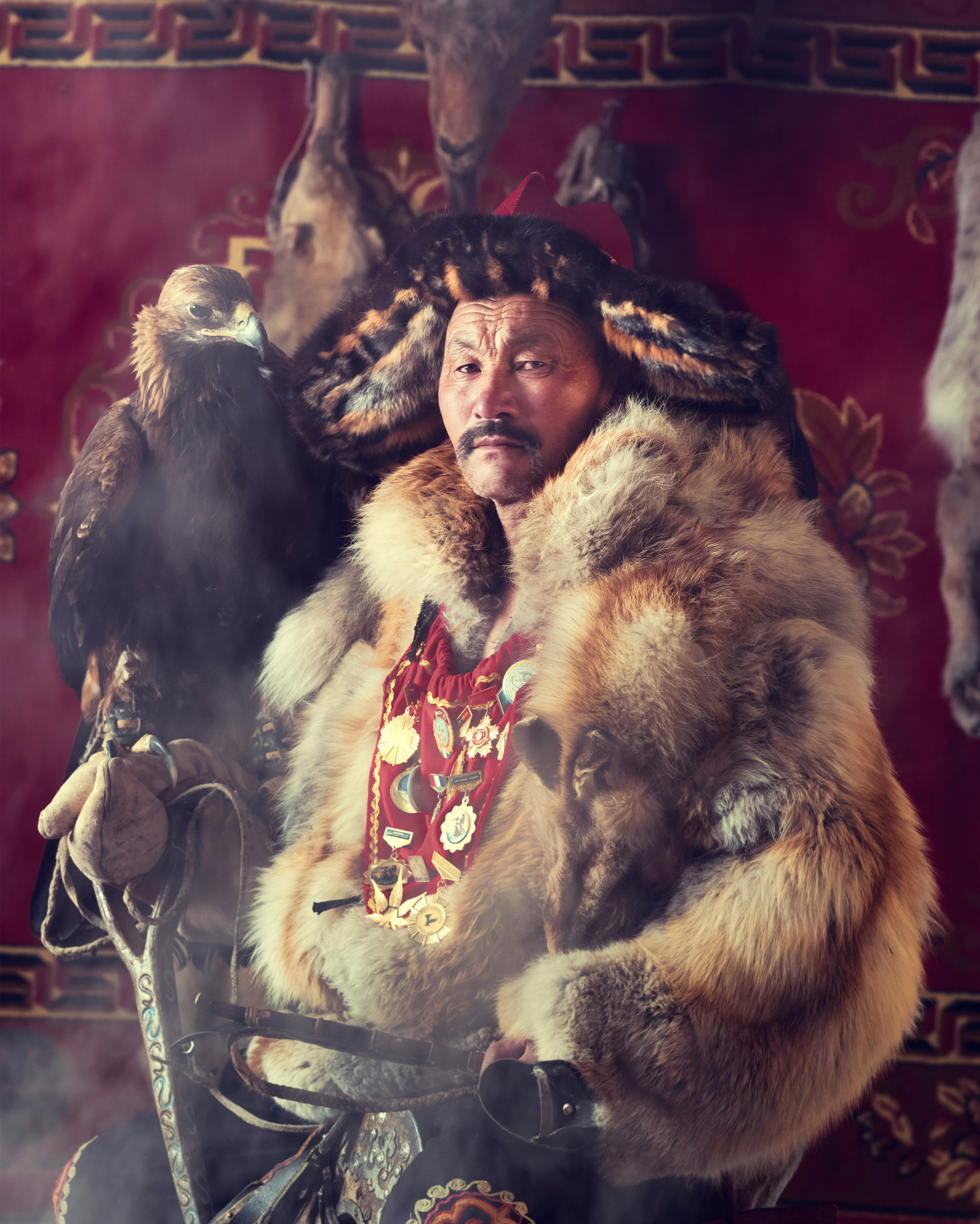 Dalaikhan Boskay, the man shown here, is an eagle hunter and one of the Kazakhs, the largest ethnic minority group in Mongolia. The term doesn’t mean that he hunts down eagles; rather, he hunts red foxes, rabbits and wolves with the assistance of these powerful birds of prey. His thick coat and hat are made from animal hides, fur and felt; whenever a Kazakh hunts and kills an animal, they are careful to use every piece of it — for utility and as a sign of respect to the creature.

The Kazakhs, who live in northwestern Mongolia, rely primarily on golden eagles. And while this kind of falconry was once the domain of men, the thousands-year-old tradition is open to change — women, girls and boys are now taking it up. People start training their eagles as fledglings, so human and bird develop an intense bond. “Hunters usually keep their eagles for around 10 years, which is about a third of their lifespan. We can feel when it’s time to give them back to the wild,” Boskay tells Nelson. “We only use female eagles, and it’s important to release them so they can have offspring and keep the natural balance.” 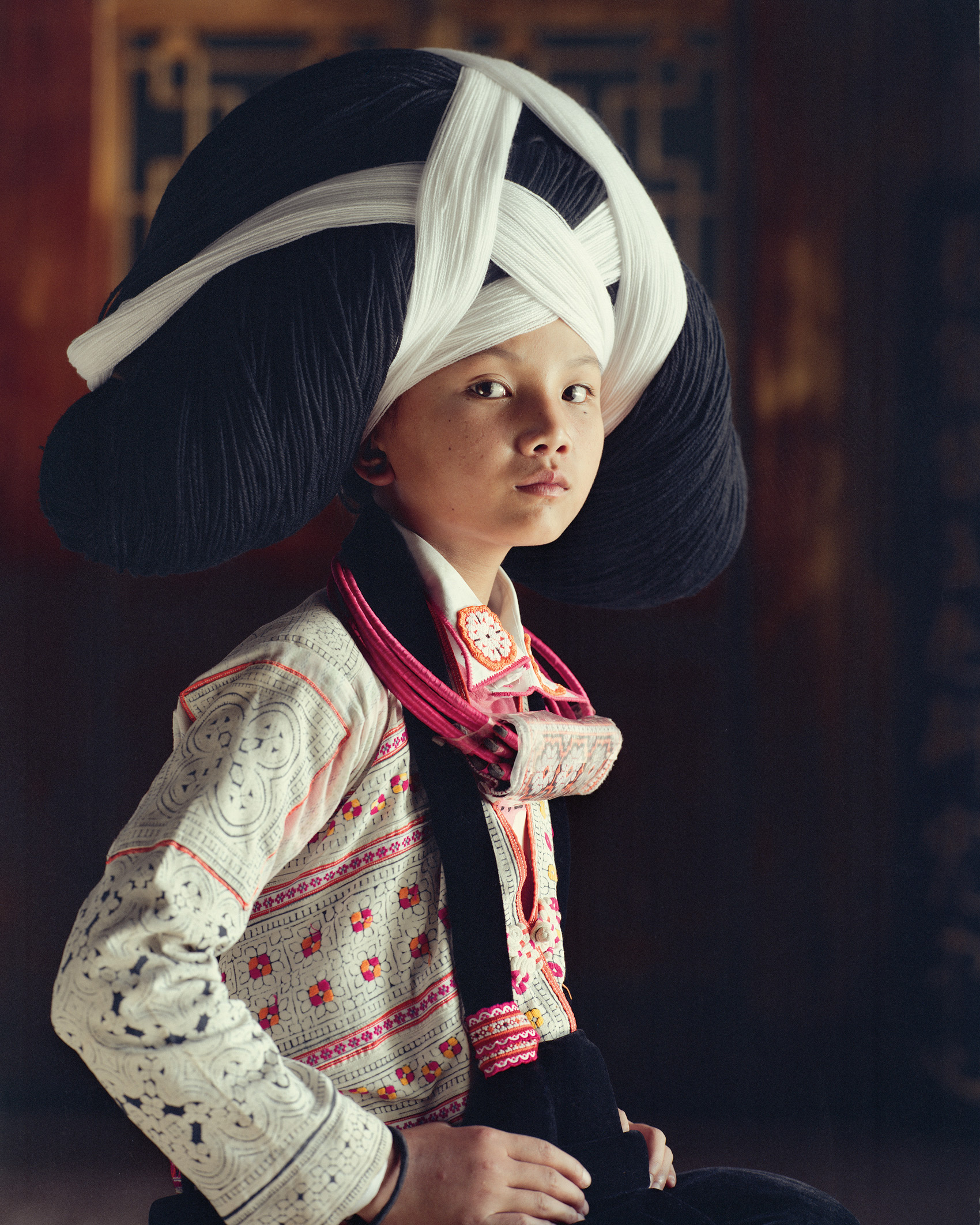 The mountainous province of Guizhou in southwest China is home to more than 50 minority groups. However, few of them still follow traditional customs, but among those who do are the Miao people (sometimes called the Hmong or Guizhou people). But the 7 million-strong Miao are not all the same — they’re split among distinct groups.

Shown is an 11-year-old girl, who is one of the Longhorn Miao. “They’re named for their impressive headpieces, which were originally made from the hair of their ancestors in order to keep them close,” says Nelson. “Nowadays most headpieces are made of wool. Their shape is derived from the oxen and water buffalo that play such an important part in their agricultural life.” To form that distinctive shape, wool is wrapped around a horn-shaped wooden comb. The headpieces are worn by the Miao during their spiritual rituals. Most Miao people are animists and believe that rocks, trees, rivers and human creations all possess their own spirits. 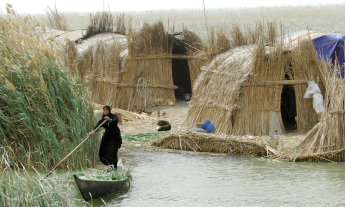 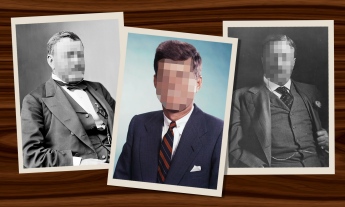